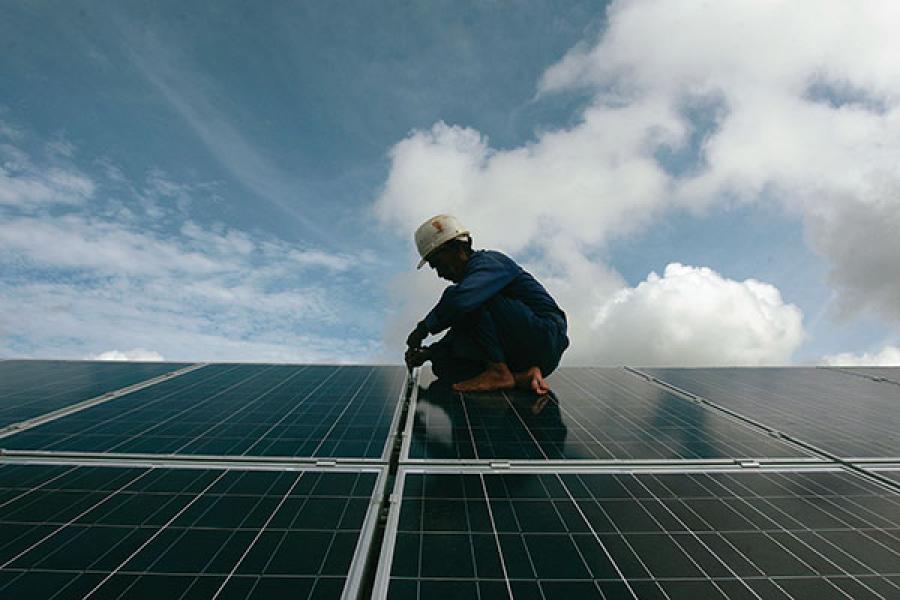 Image: Reuters
Experts say the government’s plan to roll out ultra mega solar power plants could bring down unit costs to below Rs 6

Early this year, the World Health Organization concluded that the air in Delhi was the worst among 1,600 cities in 91 countries. This was on the basis of the most widely accepted measure of air quality: The density of particulate matter (PM 2.5), fine and extremely dangerous particles that can get lodged in the lungs. Other Indian cities are not far behind.

Pollution is also impacting agriculture, and studies show that yields of some crops have halved over the past 10 years.

Switching to cleaner fuels for transportation, and producing power through renewables could cut emissions substantially. We asked a few experts how we could get to a cleaner, greener India.

Natural Gas For Transportation
Global gas prices have begun declining sharply since the shale revolution in the US. Gas use in India did not take off in the past decade, mainly because of shortages. CNG use is limited to Mumbai, Delhi, Pune, and a few cities in Gujarat. This could change soon, thanks to increased supply: Availability is set to grow over the next few years, as gas utility GAIL has been contracted to buy gas from a variety of sellers in the US, Canada, Russia, Australia and Turkmenistan. The supplies coming in, either as LNG or through long-distance pipelines, have the potential to change India’s energy-mix substantially.

Finance minister Arun Jaitley announced the first steps to enable this in the 2014 Budget. He rolled out plans to double India’s gas pipeline network to 30,000 km.

Much of this will allow the gas to move from terminals to urban demand centres around the country. Once more gas is available easily and widely, more heavy-duty users like truckers are likely to switch.

Subsidies on diesel have been removed and this could further help reverse the process of dieselisation. One recent initiative is the ministry of railway’s plan to run trains powered partly by gas. Dual-powered (CNG and diesel) trains are being tested on the Delhi-Rohtak-Rewari section.

Grid Parity For Solar Power
The Holy Grail for solar energy advocates is the point at which solar power becomes cheaper for the consumer compared to conventional (coal-based) power being delivered by the state electricity boards. With falling prices of solar equipment, what seemed improbable in the past is now within our grasp. With tariffs coming down steeply, per unit cost in some states is already less than that of power produced from imported coal.

The big push could come from the new Ultra Mega solar power plants that the government is planning to roll out.

These new projects, of 1,500 MW and above, are being planned in Andhra Pradesh, Madhya Pradesh and Rajasthan, and are likely to have much lower capital costs.

Experts like Tobias Engelmeier of solar power consultancy Bridge To India say this could bring down unit costs to below Rs 6. Solar power plants are modular and easier to build when compared to conventional power stations.

However, they require large tracts of land and this could be a bottleneck. The other factor to work against price parity, warns Engelmeier, is the fact that coal prices are softening, and could bring down the cost of coal-based power.

10 Million Rooftops For Solar Power
Though solar power is less than 1 percent of the total power produced in India every year, if the level of entrepreneurship is a measure, it also seems to have the largest potential.

Diesel inverter-makers like Su-Kam, Jackson and Kirloskar are leading the charge to a greener future by diversifying into the solar business. EPC (engineering, procurement and construction) player Tata Power Solar recently installed a 2 MW rooftop solar power plant for a textile company in Tirupur.

The National Solar Mission target that was announced in 2010 may be revised soon, energy analysts say. The target was for 2,000 MW of distributed solar power capacity by 2022. Over 285 MW of rooftop solar projects have been commissioned as of October 2014.

The power is being produced in homes, factories and government facilities, with consumers pushing the power into the grids. Tamil Nadu is the leading state, with rooftop installations of over 50 MW. Eight states already have net metering policies and nine have rooftop solar policies/schemes. Anmol Singh Jaggi, director at Gensol Solar, a Gurgaon-based consultancy, says renewable energy has moved from being a social responsibility to an economic opportunity. The target we should aim for, he says, is 10 million rooftops by 2020 to harness the power of the sun.

A Consumer Market For Green Fuel
Experts say the big inflection point will come when the Indian power market moves from being producer-driven to consumer-driven. Technology changes driving this are smart grids that enable customers to choose between sellers.

Already in use in Europe and the US, the technology allows customers to switch between multiple power-producers who are selling at different prices at different times of the day.

The first sign that this utopia is achievable is the government’s proposal to amend the 2003 Electricity Act. If passed by Parliament, consumers will be able to buy power from the supplier of their choice. Opening up distribution combined with improving technology will create a dynamic and more efficient power market, says Engelmeier. Wind power, for instance, is much cheaper than solar power today. But the drawback is that it is variable.

Renewable power usage will get a fillip from these changes, which are already in the offing.

Tweets by @forbesindia
Mohandas Pai: An emerging leader in philanthropy
Nuggets: Tech of the future