Reed Hastings, the chief executive of Netflix, seemed most at ease when talking about his new competitors, Apple TV Plus and Disney Plus, launched this month. The battle, he says, isn't as much against each other as it is against regular TV 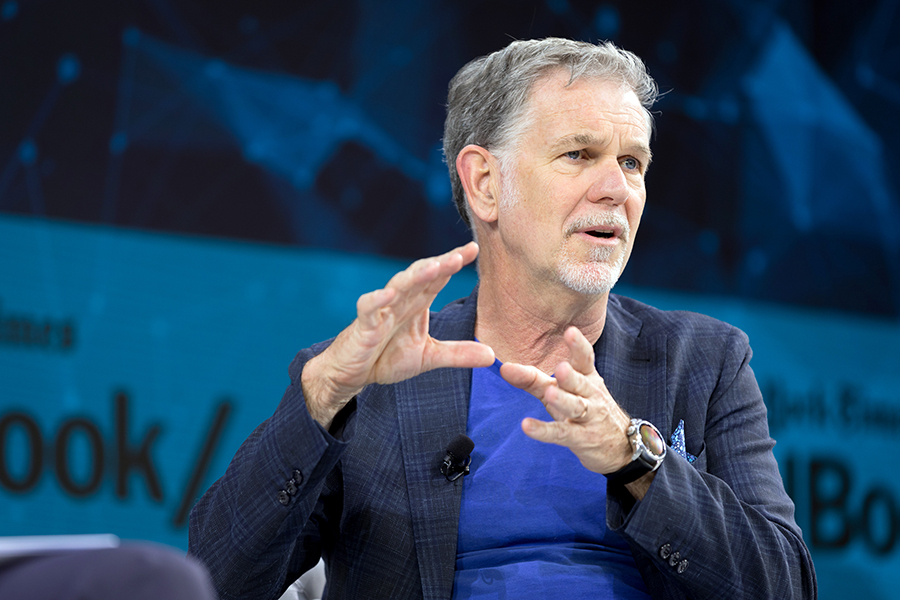 
Let’s get this out of the way. Netflix will not do any of the following anytime soon.
Show ads, like Hulu. Make games, like Fortnite. Produce news, like television. Create short-form content, like Quibi. Show sports. That fast-forward button? That’s real. Just an experiment — for now. Reed Hastings, the chief executive of Netflix, made all that clear in his appearance at the DealBook conference on Wednesday at Jazz at Lincoln Center in Manhattan. He shook his head, offered his trademark grin and waved off the possibilities. “That’s not what we do,” he said. He seemed most at ease when talking about the new competitors: Apple TV Plus and Disney Plus, launched this month, and HBO Max, coming early next year. Even Quibi. “There’s lots of competitors throughout the world,” he said. Netflix has already been up against Amazon, Hulu and YouTube for the past decade, he added. The idea of fighting for subscribers is nothing new. “The four of us have been competing hard all this time, and now it’s like, ‘Wow, this internet thing really works,’” he said. Disney and Apple and AT&T are only now getting in the game. “The tricky thing in this streaming war is Apple and Disney are not going to break out revenue,” he said. Unlike Netflix, Apple and Disney own several businesses, and sales figures for streaming will be mixed in with those from other divisions. “The real measurement will be time,” Hastings said. “How do consumers vote with their evenings.” It’s worth noting that Netflix has been notoriously stingy with its viewership data and has doled out figures for only its original series and films. The company has said it plans to become more transparent with its ratings. Netflix has won many evenings. The company’s 158 million subscribers, with 60 million in the United States, have spent thousands of hours bingeing on original hits such as “Stranger Things,” “Umbrella Academy” and “Bird Box.” Hastings said that most of the streamers should win as people continue to cut the cord. “Linear TV is declining; that’s fueling the growth of subscribers,” he said. In other words, the battle isn’t against each other so much as it is about converting regular TV viewers into full-time streaming viewers. Still, it became clear that Hastings was eyeing one competitor in particular: Disney. When asked about Quibi, the forthcoming mobile streaming service from the Hollywood entrepreneur Jeffrey Katzenberg, Hastings furrowed his brow, asked when it would start and replied: “Those are great guys, but Disney’s an amazing company — I think they’re going to have great success.” What about Apple? “There’s a bunch of tech companies that are in entertainment, but I think Disney is the one we have the most to learn from in terms of entertainment,” he said. It was a point he stressed throughout: Netflix is an entertainment company. He underlined it when asked why in January Netflix had blocked an episode of its show “Patriot Act With Hasan Minhaj” in Saudi Arabia after the government complained about a segment that was critical of the kingdom’s crown prince. “We’re not in the news business,” he said. “We’re not trying to do truth to power. We’re trying to do entertainment.” On the question of whether the streaming business is in a financial bubble, Hastings said: “The definition of a ‘bubble’ is it goes down again, and I don’t think subscribers or media spending is going to go down.” Netflix, he said, intends to increase its spending and its reach. “We’ve got a long way to go, especially on a global basis. That’s the thing that I think people underestimate. Here in the U.S. is 5% of the world’s people. And 95% — all of those people around the world — love entertainment, love television.” He also predicted Netflix would continue its “cancel anytime” option, even as competitors are considering less flexible subscription plans. “What we focus on is how do we have a service people want more,” he said. “We don’t focus on how to lock them in.” “Anytime you want to relax, you’re in front of the TV and you think, you know, ‘Do I turn on the cable? Do I turn on YouTube? Do I turn on Netflix?’ We want you to choose Netflix because you’re in the middle of a great show, because you know you’re going to find more. So that’s the main focus.”