St. John Knits, a "chic grandmother" label, has tried for years to attract a more modern clientele. Can a new designer and flock of influencers (plus Zendaya) make it happen? 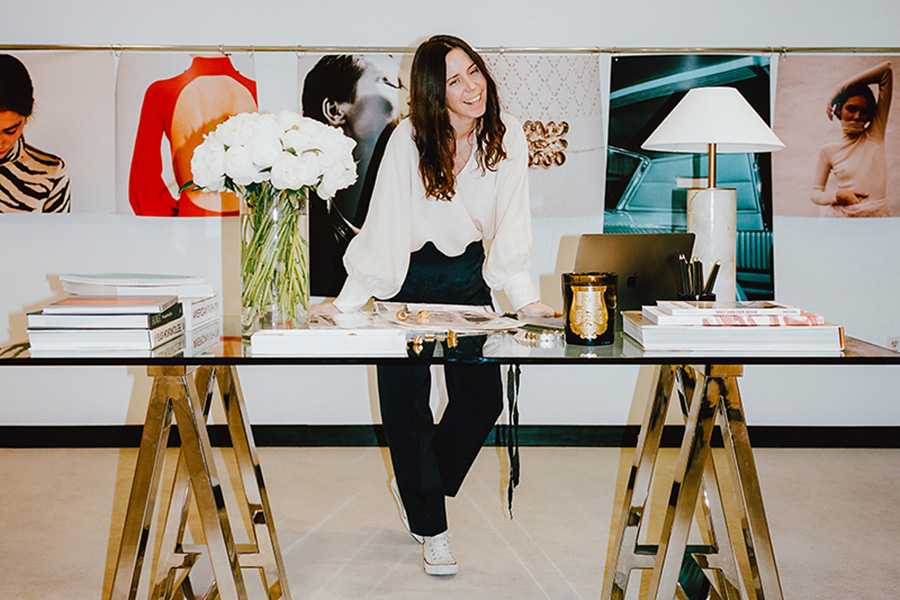 The Instagram posts began surfacing on a Thursday in November.

Actress Lupita Nyong’o wore a knitted red and black midi-dress with a high neck and cap sleeves. Sarah Jessica Parker wore a full-length dress in black silk, with a plunging keyhole neckline and billowing sleeves slit down the sides.

Both dresses came from the latest collection of St. John Knits, a 57-year-old U.S. luxury knitwear company. And both women were getting paid to pose in them. So were dozens more on Instagram: a supermodel, a former reality TV star, a magazine editor, a Kardashian stylist, a descendant of John D. Rockefeller and several popular but vaguely employed fashion influencers.

St. John was reintroducing itself, and Instagram was its vessel. The onetime family-run California company had a relatively new majority stakeholder, Chinese company Fosun Fashion Group, which has also acquired Lanvin, the French luxury fashion house. In 2018, Fosun named a new chief executive at St. John, Eran Cohen, who in turn named a new creative director, Zoe Turner, the next year.

Together, Cohen and Turner are trying to reboot the brand after years of layoffs, dwindling relevancy in the fashion industry and a corporate history of not really knowing what to do with itself. (It was sold to Escada in 1989, went public in 1993 and went private in 1999; and the founding family and multiple executives came and went throughout the 2000s.)

“It was simply time for us to modernize,” said Cohen, who has worked for Payless ShoeSource, Diane von Furstenberg and PetSmart. In the year before Cohen’s arrival, more than 200 St. John employees had been laid off. “The brand needed a little love,” he said.

St. John is best known for dressing wealthy middle-aged women in nice, classic knit suits. At one point, it was reportedly the most profitable brand at Saks Fifth Avenue. But when that knit suit started becoming less essential to women’s wardrobes, the company sought refuge in Hollywood, putting celebrities in its campaigns for the first time in decades.

In 2005, St. John hired Angelina Jolie, at the peak of her tabloid fame, circa “Mr. & Mrs. Smith” and the scandalous start of Brangelina. Six years later, the company received glowing press for casting Kate Winslet, she of the “real shape,” and replacing Jolie, who had “overshadowed the brand.”

By 2013, another new chief executive had arrived (this one from Louis Vuitton), declaring his intent to make St. John “relevant” and target a younger demographic. Jolie and Winslet hadn’t done the trick.

Yet the brand’s reinvention playbook hasn’t exactly changed. Three months ago, St. John did the 2020 version of placing glossy celebrity ads in Vogue — that is, planting those sponsored posts with Instagram influencers (including some celebrities, like Nyong’o and Parker).

But the breadth of this campaign has been different. In previous attempts to rebrand, revitalize, reinterpret or revamp St. John, the design largely remained the same: sophisticated and conservative, professional but comfortable, timeless and tweed.

This time, without straying too far from its expensive-looking DNA, Turner, St. John’s new designer, offered a thoroughly modern capsule collection. If the old St. John had been the unofficial uniform of professional lady luncheons, the new St. John looked like something worn by the cool woman at your office, whether she was under or over 40. 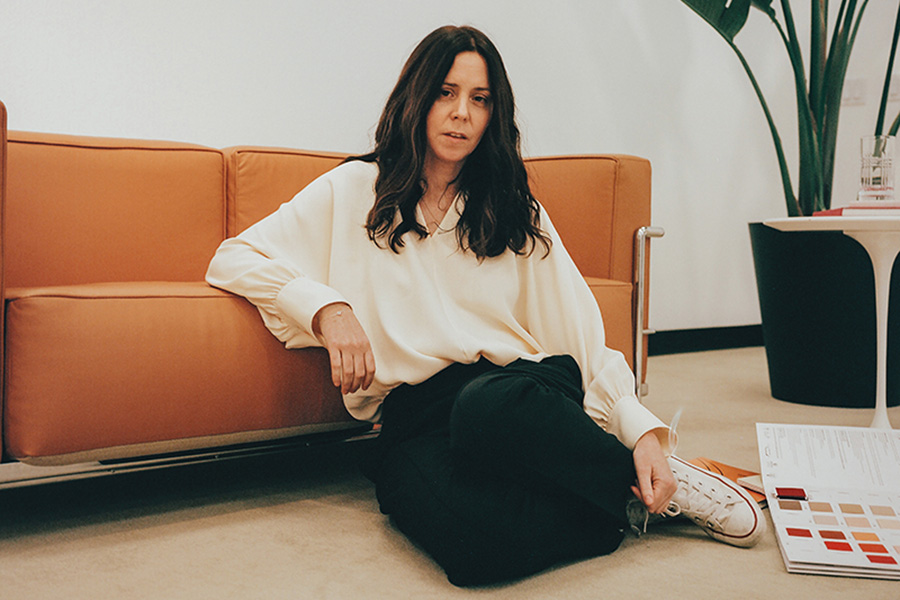 She showed more skin — an A-line black midi-dress with long vertical cutouts slicing the skirt. She took more chances — a monochromatic navy leather turtleneck and matching skirt. She had style — the new tweed suit had the slouchy silhouette of a sweatsuit, which Turner said has sold particularly well in Asian markets.

St. John also widened its demographic target beyond the stereotypical Vogue reader. For its influencer campaign, the company teamed up with a transgender model, a queer woman who runs a menswear blog and disability activists including Lauren Spencer (“Lolo”) and the late Mama Cax, among others. Essence magazine covered the release of Turner’s capsule collection; Vogue did not. (Cohen said that St. John has always been “inclusive.”)

“I want every woman to be able to see themselves in St. John,” Turner said. She exalts both femininity and tailoring, which shouldn’t be a surprise given her near-decade working at Christian Dior under John Galliano and Raf Simons. (She hasn’t yet fully relocated from Europe to St. John’s headquarters in Irvine, California.)

St. John’s campaign seemed to pay off. On Nov. 20, weeks after the release of the capsule collection, Zendaya, who emerged last year as a young fashion powerhouse, was pictured on Instagram wearing a pleated white evening dress from the collection. It was not a sponsored post.

She and her stylist, Law Roach, had selected the dress for a dinner celebrating her recent Garage Magazine cover, a collaboration with artist Simone Leigh.

Roach said that when his team came across photos of Turner’s designs, they were surprised.

“For the most part, St. John has always been what your chic grandmother wears,” he said. “If you’re not a Chanel girl, you’re a St. John girl. This feels new. This feels fresh.”

Roach said the dress chosen for Zendaya was “artsy, Grecian — there’s emotion to it.” The waist was slightly cinched with a belt of large gold knitting loops. The silhouette, he said, “felt like something she had never worn before — simple, but it was still a statement.”

If anything hinted at St. John’s potential coolness, it was the fact that, in posing together for photos that night, Leigh wore a dress by Christopher John Rogers, the fashion industry’s current boy genius, while Zendaya smiled next to her, wearing St. John, this “chic grandmother” brand.

But Zendaya’s approval alone cannot make a brand successful; neither can 100 influencers. St. John won’t explicitly discuss age, but it’s clear that the company must attract new (younger) customers willing to spend hundreds if not thousands on a luxury garment — without isolating its shrinking faithful core. It’s a balancing act, and Cohen, like his predecessors, is tilting toward serving the older customer base.

“I don’t think we’re really changing who we’re talking to,” he said, “just speaking a little more loudly than we’ve done in the past.”

A week before St. John was scheduled to show Turner’s fall collection at New York Fashion Week, the presentation was canceled. The label decided it would rather promote the collection later, via social media. Turner said production had taken longer than expected.

“We won’t do anything if it’s not done extremely well,” she said. “So we’re just going to take our time a little bit more now and make sure we do things properly.”

The fall collection, which will sell for $395 to $4,200, is less daring than the capsule, leaning more into the nostalgia of the brand. Evening dresses look familiar: a silk apricot Halstonesque gown with voluminous sleeves; a long sleeveless dress in pale pink with a square neckline and large sequins, which Turner spoke of reluctantly.

“I’m not going to be using too many sequins within the collection,” she said. “I want to find new ways of doing evening.”

If St. John is to finally succeed at changing its image, these “new ways” may require some more marketing.

In November, when writer Leandra Medine Cohen of Man Repeller shared her paid Instagram post wearing an item from Turner’s capsule — a stretchy, cocoon-shaped transparent silk turtleneck overlaid with a choker in the same style of Zendaya’s belt — she referred to it as her “‘I’m a mom’ look.”

Tweets by @forbes_india
The iPhone at the Deathbed
Vape shops face a choice: Close or Rebrand