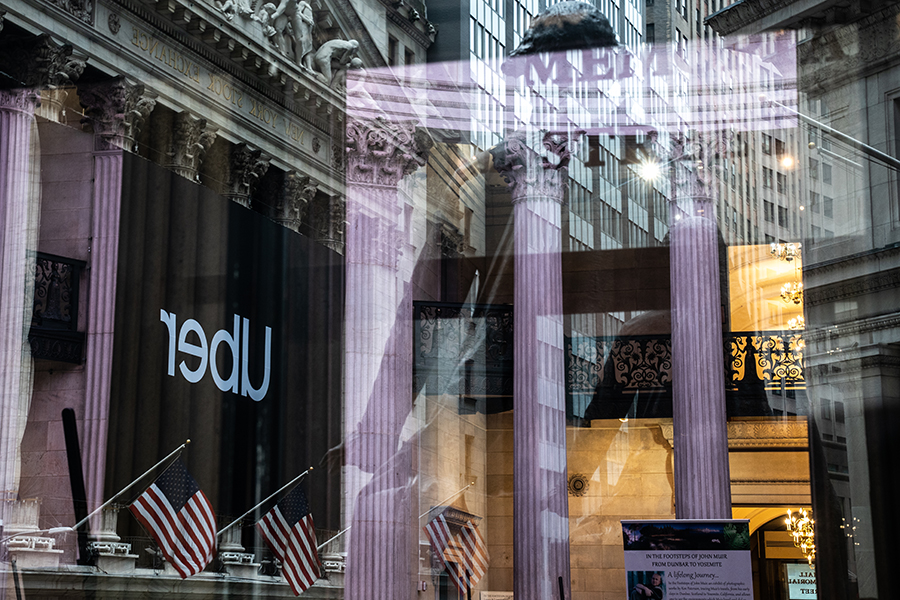 FILE — An Uber sign, seen in reflection in Manhattan, May 10, 2019. In a first earnings report since Uber listed its shares on the stock market, the ride-hailing giant reported slowing growth and more than $1 billion in losses for the first three months of 2019. Revenues were up 20 percent. (Jeenah Moon/The New York Times)

SAN FRANCISCO — Uber’s start as a publicly traded company has gone from bumpy to bumpier.

In its first earnings report since listing its shares on the stock market this month, the ride-hailing giant Thursday reported its slowest growth in years and steep losses for the first three months of 2019.

Uber’s loss totaled more than $1 billion for the quarter, compared with a profit a year ago that was driven by divestitures. Revenue rose 20% to $3.1 billion, slower than the 25% annual growth it had recorded in the prior quarter. It was the company’s lowest quarterly growth rate since it began disclosing its results in 2017.

The results compounded a turbulent few months for Uber. This year was supposed to have been a triumph for the company, with what was set to be a glorious initial public offering. But that offering ended with a whimper as investors questioned whether the deeply unprofitable company could ever make money. Uber’s stock has since fallen more than 11%, and its executives have been excoriated for their performance.

Uber’s arc mirrors that of its rival Lyft, which went public in March. Lyft’s shares have since fallen below their offering price, and the company recently reported a quarterly loss that also exceeded $1 billion. The size of the losses for both companies has raised questions about how viable ride-hailing can be as a business.

The troubled stock market debuts of Uber and Lyft have sent jitters through the rest of Silicon Valley, where other prominent tech companies have also been planning to go public. Slack, the workplace collaboration company, for example, plans to list its shares in June. Real estate firm WeWork and food-delivery company Postmates are also in the pipeline.

Uber’s executives chose to focus on the positive Thursday. CEO Dara Khosrowshahi emphasized that its users were more engaged with the ride-hailing company than ever before and that it continued to dominate in the regions where it operated, including a 69% market share in the United States.

But he also indicated that Uber’s losses would not end anytime soon because the company planned to keep spending to expand. Uber’s costs and expenses totaled $4.1 billion in the first quarter, up 35% from a year earlier.

“We are now focused on executing our strategy to become a one-stop shop for local transportation and commerce,” Khosrowshahi said.

Nelson Chai, Uber’s chief financial officer, added that the company was investing in “product and technology differentiation” but was also willing to outspend competitors in the core ride-hailing business. “We will not hesitate to invest to defend our market position globally,” he said.

Uber’s shares, which have fallen from their $45 offering price, rose in after-hours trading Thursday. Kathleen Smith, a principal at Renaissance Capital, which manages exchange-traded funds focused on IPOs., said Wall Street had expected the losses and slowing growth because Uber had indicated them in its IPO paperwork.

“If Uber does nothing worse than it said, it may be a good result for them,” she said.

The company’s results included some bright spots. Uber has a lengthy history of battling competitors in fierce price wars, offering subsidies to riders and drivers. But Khosrowshahi said those fights were beginning to subside, with competitors focusing on building their brand and products rather than on paying incentives. He called it “a healthy trend.”

Some of Uber’s newer businesses, such as food delivery and freight delivery, also grew at a healthy pace. Uber Eats, its meal delivery service, more than doubled from a year earlier, while Freight jumped more than 200%. The company is expanding Uber Eats in Latin America as well as in Japan, where ride-hailing is not permitted.

In an earnings call, some analysts raised questions about whether Uber Eats could sustain its growth in the face of heavy competition, and whether Uber’s price wars would shift from ride-hailing to food delivery. Khosrowshahi said Uber expected to remain the largest food delivery service outside China, whether it held its position through competition or by acquiring a competitor. Any acquisition would be a Plan B, he said.

He also faced questions about one of Uber’s biggest markets: New York. Recent city legislation imposes a minimum wage for ride-hailing drivers, who are classified as independent contractors rather than as employees. As a result, ride-hailing rates for passengers in New York had increased significantly, Khosrowshahi said, and the volume of rides had declined. Still, he said, the market remains valuable to Uber.

Khosrowshahi also addressed Uber’s IPO, saying he was “proud of what we’ve achieved.” He added, “I’ve told our team it is just one moment in a longer journey.”

Tweets by @forbesindia
Darjeeling tea faces Nepali threat
Yes, India's economy is growing, but can you trust the data?