What is Wrong With Indian Microfinance

The industry hailed itself as the saviour of the poor. But it is now stuck in its own web. An insider's perspective on how it got itself into this mess 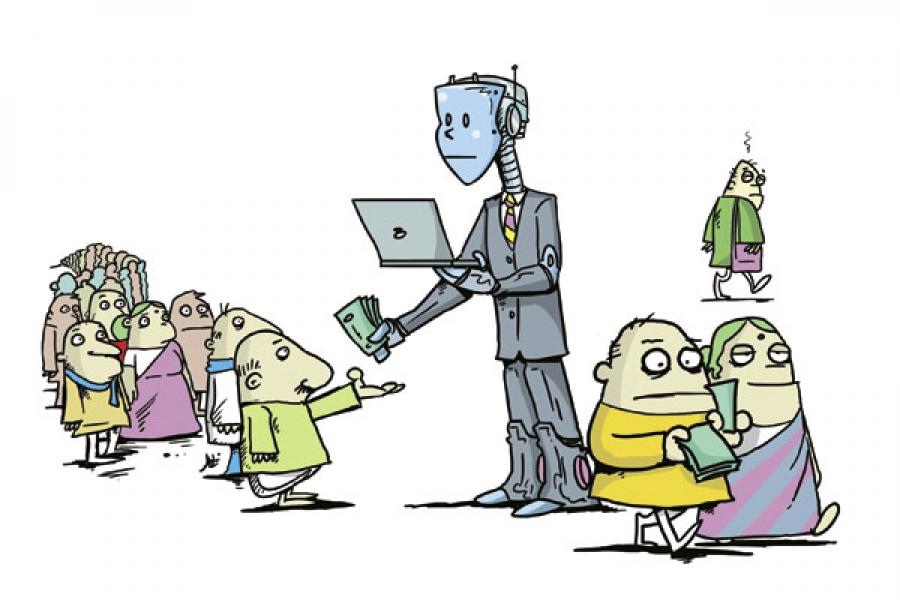 Growth at a Scorching Pace
From people carrying a sling bag on their shoulders and dressed in a khadi kurta, the microfinance industry has moved upmarket either to suits or FabIndia kurtas. A netbook has replaced the sling bag. In about a decade, microfinance has moved from helping the poor to access finance to an interesting business at the bottom of the pyramid. This paradigm shift happened with the entry of funding, initially from Silicon Valley, and then from the people who funded and fuelled the growth of Silicon Valley.

Somebody from Silicon Valley would typically be an entrepreneur who started small, scaled up fast, used the asymmetries in the market and logically and legally became rich. Many were first generation entrepreneurs and did not forget their roots. It was logical for them to invest their surpluses into the business of doing good.
However, their own success and growth experience dictated that while they do good, they should also do well. Doing well translated into good business plans, targets and also growing at a scorching pace.
All was well for us, within the industry, when the base was small. There were several 100 percents in the microfinance sector. The growth rate was in excess of 100 percent, recovery was 100 percent and the sustainability indices quickly crossed 100 percent. Voila, we had found a magic mantra where the poor could be served, we could look good and put “eradication of poverty” as our mission statement and of course, lead a comfortable life. The alternative sources that were funding the poor made us look like messiahs.
The problem was that we were dealing with people and not processes and systems. This involved group formation and dealing with behavioural patterns of people. But we got addicted to the heady growth target. And when we chase targets without logic, we cut corners. We became cut-throat in competition and we lost a sense of balance. There are enough signals for us to push the pause button.
Multiple Lending
Is there a bubble being created? Are most microfinance institutions chasing the same customer? Are we pushing the customer — the poor woman — into a debt trap? Would this lead to suicides? We have to realise that these are not issues of today, but issues of yore.
When an MFI lends to a family that is indebted to a moneylender, there is already multiple lending. In 2005 when I was doing fieldwork, one of the microfinance heads told me, “We have made our processes simpler: If the potential borrower has already passed a group recognition test of a competitor, she is eligible for a loan from us”. It could be interpreted as leveraging on the social capital built by others, or as multiple lending — the choice is yours.
The question is not whether there is multiple lending. The question is whether the lender knows the absorption and repayment capacity of the borrower. It is impossible to know this if we are doing a group meeting in 20 minutes and moving on. It is impossible to address this when we have standardised products and offer a higher loan each cycle. Our credit officers are trained to be robots following a process mechanically and are prohibited to think. Therefore multiple lending is a problem of the MFIs. We clearly do not know our customers enough, and do not have the time to know them.
There have been moves to have a credit bureau to address this problem. Is this not a joke? What will a centralised database covering Ganjam (Orissa) and Ernakulam (Kerala), Chennai (Tamil Nadu) and Ludhiana (Punjab) tell me better than what my credit officer can tell? Every organisation operating in the area knows the other. We have asked our credit officers to chase targets. If only we ask our credit officers to treat this money as their own and see if it is worth lending to the client; if only we allow our credit officers to think.
Reading the Signals Wrong
There was a crisis in Krishna (Andhra Pradesh). We read it as a jealous government programme trying to get back at us. This was a crackpot zealous set of people who just wanted to shut us up because we were immensely successful. Then there was Nizamabad (Andhra Pradesh). We said that this is communalisation. How could this happen to a secular business like lending to the poor. Then Kolar (Karnataka), and Idukki (Kerala).
This is not a localised response. People of different orientation and different backgrounds are getting upset with our business. We can have a micro argument for each one of these and be satisfied with “I am the best and nobody understands me” syndrome. Where are we going wrong? Is there something in what is happening? 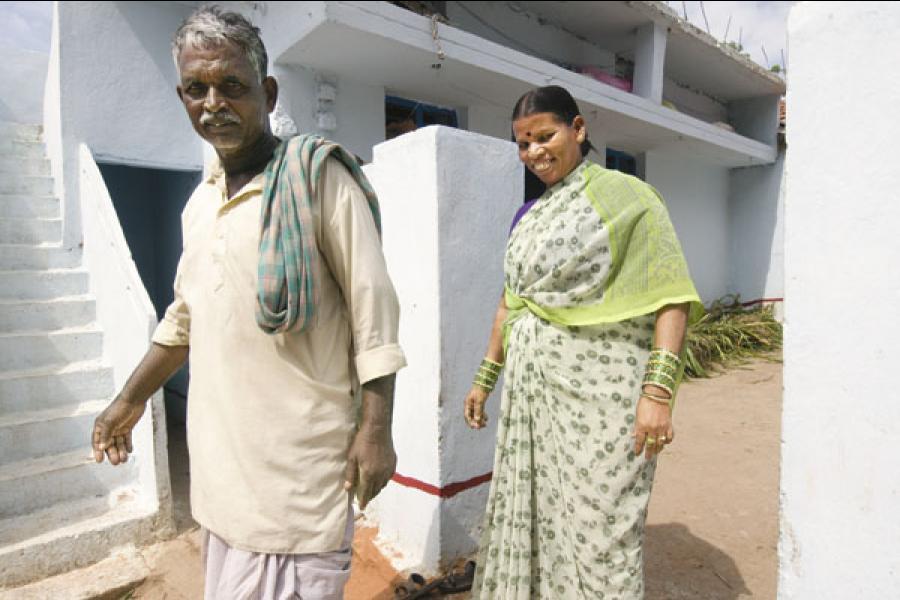 Image: Vikas Khot
CLOSER LOOK Credit officers must be encouraged to take the time to underestand their clients
In Krishna, we suddenly decided that we could afford to reduce interest rates and continue with life as usual. Does that mean that we were charging more? How do we tread the fine line between trying to seek “what the market can pay” price and not appear greedy?
The reason why we should not appear greedy is not because we should not make money and lead a comfortable life, but because we have positioned ourselves as institutions that work exclusively with the poor and towards the eradication of poverty and empowerment of women. If that is the positioning, we should not be seen as seeking excessive returns from the poor to lead a lavish lifestyle.
The signals in Krishna, Nizamabad, Kolar and Idukki are about the mismatch between the lofty objectives, our target clients on one hand, and the amount of returns and overnight wealth we are getting on the other. These are larger signals. We need a macro response and not an isolated, insulated response. We should be seen as “responsible” lenders and be seen more aligned to the larger public sector banks rather than be called white-collared moneylenders.
Good Boys in Bed with Bad
The microfinance sector in general has a false sense of solidarity. The good boys constantly stand up for the bad boys in case of a crisis. This is a peculiar syndrome. If there is bad name for microfinance on account of a bad egg, it affects us. Therefore if there is an organisation we do not like, we still support them because it might affect us.
So the good boys think they need to protect the “sector”. The good boys think that they are using the bad boys to build the numbers and show how big and influential they are, and the bad boys are shooting under the cover of good boys. It is time that some of the leaders of microfinance stood up and called a spade a spade. We are afraid to raise questions about “successful” and “powerful” people because it might affect us. While that is a good short-term view, it is going to hit us badly in the long run. We hope that if we form an industry association and evolve a code of conduct, the entire problem would be solved. It is just a matter of getting together, putting our heads together and making pledges about being transparent, non-exploitative and treating the poor client with dignity.
Unfortunately we do not say this before we admit somebody to the association. Why can we not say that unless we are already adhering to the code there is no admission to this club? But no, we live in eternal hope that we will reform our mal-adjusted juvenile delinquents.
We keep their company when we meet the regulator, we ask and even plead with the bad boys to be with us when we meet the ministry. We want to show that we are united. United for what?
Is there Hope of a Correction?
The poor are smart, sometimes smarter than the people who are lending to them. They have learnt the art of juggling the impossible, struggling for everyday life and therefore they know every trick in the trade that has been used and not used. If we think we are taking them for a ride, let us pause and think. If the MFI gives the sense to the borrower that it is unscrupulous, the borrower will take the MFI for a ride sooner or later! The day they reach a tipping point where they think enough is enough, they will default. Neither coercion nor any group mechanism will work. It will not work because we would have already put them into a debt trap and this is the only response they have. Since they have no exposure with us and we have all the exposure with them, it is us who will collapse, not them.
There are talks of self regulation and passing a bill. Self regulation is an oxymoron. I should show responsible behaviour and I have regulated myself. Period. I do not need a peer group to regulate my already good behaviour.
Therefore it is a question of intent. If I want to be responsible, then no law will prevent me from being good. Regulation is needed to deal with the deviant behaviour. Therefore regulation is not preventive, it is only a framework to deal with an event after it happens. The industry has to auto correct. I do not think there is any other way. MFIs may have a cascading collapse in places where the competition is unscrupulous and intense. I think we should not lament if an MFI collapses.
Nothing can grow at the rate at which MFIs are growing, particularly in the financial world. It is all a question of who is the sucker who exits first when the going is good.

(The author has worked for, or served on, the boards of different microfinance institutions. He remains a director at Sanghamitra Rural Financial Service, an MFI. He was a professor at the Indian Institute of Management, Ahmedabad and is currently an independent professional based in Bangalore)

Tweets by @forbes_india
Flying in the Future
What Airlines are Doing for You?