Where are the American jobs?

Even in some of the hottest labor markets in the country—let alone lagging rural regions and former industrial powerhouses—workers, including skilled ones, say they cannot find jobs that provide a middle-class income and do not come with an expiration date. 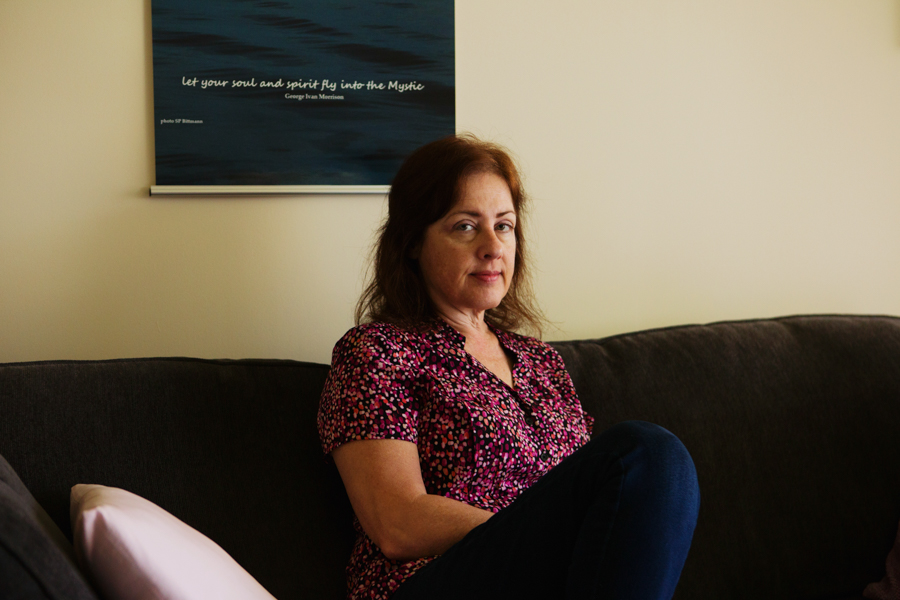 Laura Ward at her home in River Vale, N.J., Oct. 14, 2019. Ward has worked temporary stints over the last three and a half years, but she has not been able to find a steady, full-time job. (Mary Inhea Kang/The New York Times)

RIVER VALE, N.J. — Laura Ward flipped through the small, lined notebook where she had neatly recorded every job posting she had answered, résumé she had sent and application she had completed since being laid off in March 2016.

No. 28 was a job listing for a creative manager at Byre Group posted on the website Indeed.

No. 97 was about a brand marketing administrator job at Benjamin Moore.

No. 109 — marketing operations at AMC. No. 158 — associate production manager at Vitamin Shoppe.

Callbacks were circled in green. Rejections were marked with a red X. Most have neither, signaling no reply one way or the other. Bottled messages dropped in an ocean.

“I had to keep track somehow,” said Ward, who has maintained job-hunting diaries since the 1990s.

Even in some of the hottest labor markets in the country — let alone lagging rural regions and former industrial powerhouses — workers, including skilled ones like Ward, say they cannot find jobs that provide a middle-class income and do not come with an expiration date.

After more than a decade as production manager at a small advertising agency, Ward was let go after the firm lost a major account. Over the last 3 1/2 years, she has worked temporary stints, and bolstered her skills by taking a project-management course at a nearby college. But she has not been able to find a steady, full-time job.

So for her, the reports of low unemployment rates and employer complaints of labor shortages are puzzling.

“I don’t know what all those jobs out there are,” she said from her living room in River Vale, a New Jersey suburb within commuting distance of Manhattan.

The continuing strength of the labor market has been one of the most remarkable economic achievements since the recession petered out. One hundred and eight months of consecutive job gains have coaxed discouraged and disabled Americans back into the workforce and raised wages and hours, particularly for those at low end of the pay scale.

But beneath the clear benefits of the economic expansion, there is an undertow of anxiety, heightened recently by fears of slowing growth around the globe and in the United States.

“We’re not focusing enough on the people who have continued to be left behind by this recovery,” said Martha Gimbel, a manager of economic research at Schmidt Futures, a philanthropic initiative. “We have not talked enough about the workers who are still stuck even in a labor market that is this competitive.”

Most of these people do not show up in the stunningly low official unemployment rate of 3.5%, the lowest in a half-century. Working even one hour during the week when the Labor Department does its employment survey keeps you out of the jobless category.

Many more show up in a broader measure, which includes people who are working part time but would prefer full-time employment, and those who want to work but have given up an active job search. That rate in September was 6.9%, some 11 million people.

But there are also many others, like Ward, who work temporary jobs for months at a time and are not necessarily captured in either measure. And millions of contract workers — freelancers, consultants, Lyft drivers — lack benefits, regular schedules and job security. They have found a foothold, but it rests on loose rock.

A recent survey by Gallup found that a majority of Americans do not consider themselves to be in a “good job.”

Appealing to “Americans on the sidelines” and those who had not benefited from the “so-called recovery” was a key element of Donald Trump’s presidential campaign in 2016. Now, Democratic presidential contenders like Elizabeth Warren and Bernie Sanders are arguing that American workers have barely shared in the economy’s gains.

And they have bypassed benchmark statistics like the unemployment rate and focused instead on the system’s fundamental unfairness, highlighting stark income inequality and worker rights.

The political pressures have even registered in penthouse suites. The Business Roundtable, a group of chief executives of some of the nation’s biggest corporations, issued a new mission statement in August declaring that companies should promote the interests of their employees as well as their investors.

“We know that many Americans are struggling,” the group said in a release. “Too often hard work is not rewarded, and not enough is being done for workers to adjust to the rapid pace of change in the economy.”

Such pronouncements have yet to produce a tangible change in many Americans’ daily lives.

One in four workers say they have unpredictable work schedules, which can have insidious effects on family life. One in five adults who are employed say they want to work more hours. Annual wage growth has struggled to reach 3%. And nearly 40% of Americans, a Federal Reserve report found, are in such a financially precarious state that they say they would have trouble finding $400 for an unexpected expense like a car repair or a medical bill.

Keenan Harton, 45, juggles two jobs, one at a Biscuitville fast-food restaurant that pays $8 an hour, and another at a hospital laundry in Durham, North Carolina, that pays $10.50 an hour. Often he shows up for work at the fast-food job for an eight-hour shift, only to be sent home after a couple of hours if business is slow.

“It’s real hard to find a full-time job that’s actually going to pay over $10 an hour,” said Harton, who has a high school diploma.

Four hundred fifty miles north, in New Jersey, Sonia Johnson’s last job was in August, a four-week assignment. “But my last full-time direct hire was back in 2009,” said Johnson, who worked in the human resources department of a pharmaceutical company until she was laid off. “For me, it’s been all through an agency, working as a contractor.”

Johnson, 55, who has a college degree, said she had kept her skills up to date by using grant money from the state’s labor department to take courses. “I have really good technical skills,” she said.

Asked how many jobs she had applied for, Johnson hesitated. “It’s almost embarrassing,” she said. “At least 500.”

Her impression is that the contract work that enables her to pay the bills may at times hinder her ability to get a full-time job. “Employers are not happy with people with a contract working background,” Johnson said, adding that they are also suspicious of any gaps in a résumé.

National averages, of course, can mask distinct geographical differences. Workers may not have the specific skills a particular employer needs, or live where a job opening is. But research also shows that some employers have a negative view of people who have been unemployed for long stretches at a time.

“The longer you are unemployed, the more stigma is attached,” said Carl Van Horn, the founding director of the Heldrich Center for Workforce Development at Rutgers University.

African Americans and older Americans are more likely to find themselves among the long-term unemployed, he said, a group that includes people out of work for more than six months. And age discrimination, particularly against women over 40, has been documented in several studies.

“There are very limited remedies in this country to deal with these issues,” Van Horn said. Cash assistance runs out, and there are few retraining opportunities. He noted that a lot of higher education assistance, like Pell Grants, do not pay for short-term training, which is what many people lacking a particular skill could benefit from.

Both Ward and Johnson are members, and that is where they learned about the state’s grants for training.

“Every morning, I wake up and there’s that one second when I realize I don’t have a job, and it’s scary and awful,” Ward said.

Holding her notebook in her lap, Ward slowly ran her finger along the pages of color-coded entries of job leads.

“It’s interesting to watch as time went on,” she said. As the weeks, and then months went by, her search criteria shifted. “OK, a little further away, 35 miles instead of 25,” she recalled. “Maybe a little less money, maybe this title instead of that.”

Her cellphone rang and she excused herself to answer it.

“I applied to these three jobs yesterday and I thought maybe they’ll call me,” she said when she did not recognize the number. It turned out to be a nuisance call.

Now that three years have passed since her last training, Ward is again eligible to take up to $4,000 worth of classes, and she has signed up for a social-media marketing class and an introductory design course.

“That should buy me till the end of the year,” she said.