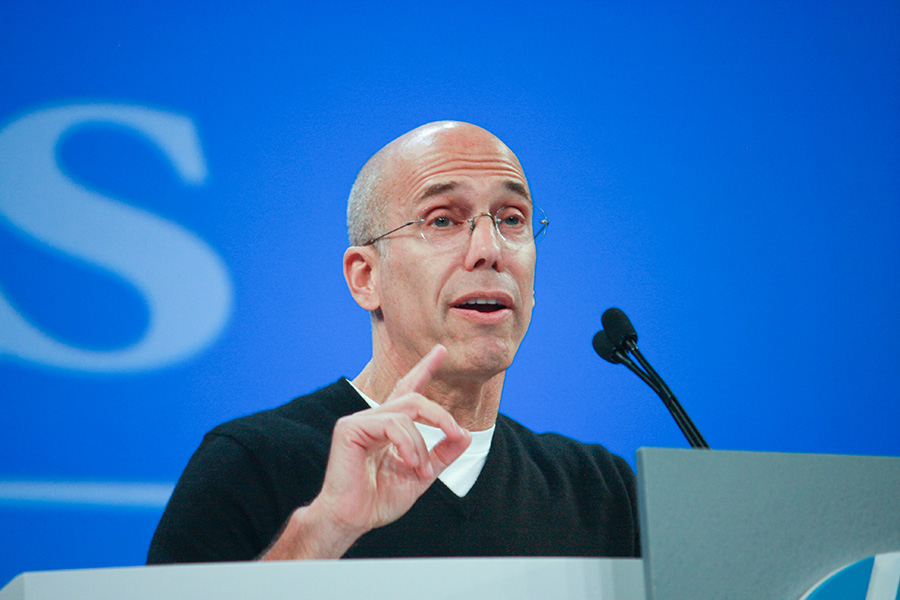 Jeffrey Katzenberg, Co-founder & Former CEO of DreamWorks
Image: Shutterstock
Getting fired while seemingly at the apogee of a career would faze most executives. But it only took Jeffrey Katzenberg eight days to recover after being shown the door at Disney, where he’d headed its motion picture division for 10 years. In just over a week, he teamed with Hollywood heavyweights Steven Spielberg and David Geffen to launch DreamWorks, where they turned out hits including Saving Private Ryan, Castaway, A Beautiful Mind, and Shrek.

Despite the success of DreamWorks, Comcast pushed Katzenberg out when it bought the production company in 2016, an outcome that left him with a huge payout — and some bruised feelings, Katzenberg said during a recent visit to Stanford Graduate School of Business. “Well, what do you mean, you want my company and you don’t want me? I was like, ‘Wow, I’m kind of hurt by that’ for a moment.” The sting may have lasted more than a moment, but as he did after the exit from Disney, Katzenberg quickly put together financing and a high-powered team to launch a new company: WndrCo, a venture that will invest in media and technology companies.

The ups and downs of Katzenberg’s career have taught him something about overcoming obstacles: “When you’re put in the wrong place at the wrong time, you learn amazing things about life, you experience moments of sacrifice, and learn how to be a leader.”

Katzenberg shared advice about managing a career, developing talent, and where to find the best pizza in Las Vegas during a View From The Top discussion.

Intra-Company Job Hopping Is Good
Katzenberg’s first job in Hollywood was working as a gopher for Barry Diller, then the chairman of Paramount Pictures, who became his mentor. “He invested in me. He believed in me,” says Katzenberg. Diller moved Katzenberg from job to job within Paramount, eventually making him president of production when he was just 29. “And I actually could do the job. And the only reason I could do the job is because he had taken the time to actually train me and give me the resources to function in the job.”

Soften Your Image
As the head of a studio, Katzenberg found that “coming to see me started to get to the point where it’s like going to see Oz. It scares you to death.” To make it easier for subordinates to approach, he made a point of sharing meals with them. Katzenberg does that so much, he’s known for eating multiple meals every day. “Suddenly, the relaxed nature of sitting at a table with somebody coming and bringing food and eating just gave me an ability to connect with people way, way, way better than I could across a desk in an office or sitting on the other side of a couch.”

“ When you’re put in the wrong place at the wrong time, you learn amazing things about life, you experience moments of sacrifice, and learn how to be a leader."  -Jeffrey Katzenberg

Get a Life
Earlier in his career, Katzenberg was so obsessed with the work ethic he once said: “If you don’t come to work on Saturday, don’t bother coming on Sunday. And when I said it, I meant it,” he says. But later he learned that “work/life balance is not just a nice theoretical thought. There is a moment in time in which you actually have to find those things that make you whole as a human being, and then make you better at what you’re doing.”

Allow Your Team to Fail
Successfully managing a company is about finding great ideas and finding great talent, says Katzenberg. “It’s about creating a great environment for people to be able to pursue and realize dreams, even though those dreams, in many cases, are anywhere between improbable and impossible.” A manager needs to create an environment where people have the ability to fail and to take risk, he says. “If you don’t allow some failure in the equation, you’re not going to have people do things that are risky and unique or that are unique and original.”

College — Not Necessarily
Everyone who follows business news likely knows that tech billionaires Bill Gates, Michael Dell, and Mark Zuckerberg never finished college. Neither did Katzenberg — who dropped out of NYU in his first semester — or his partners at DreamWorks. In 1970, when he started at New York University, he was working for then-Mayor John Lindsay. “The police went on strike in New York City, which had never happened before. And I thought I could do better [working for the mayor] than in a college classroom. And that was the end of my college career.”

Tweets by @forbesindia
Toppr: From the old school
India's tryst with taxes