Skymet now does a lot more than predict the monsoons

India's largest private weather forecaster is giving the IMD a good fight for accuracy. It's now using its data stations to predict crop yield and for innovative insurance schemes in rural areas 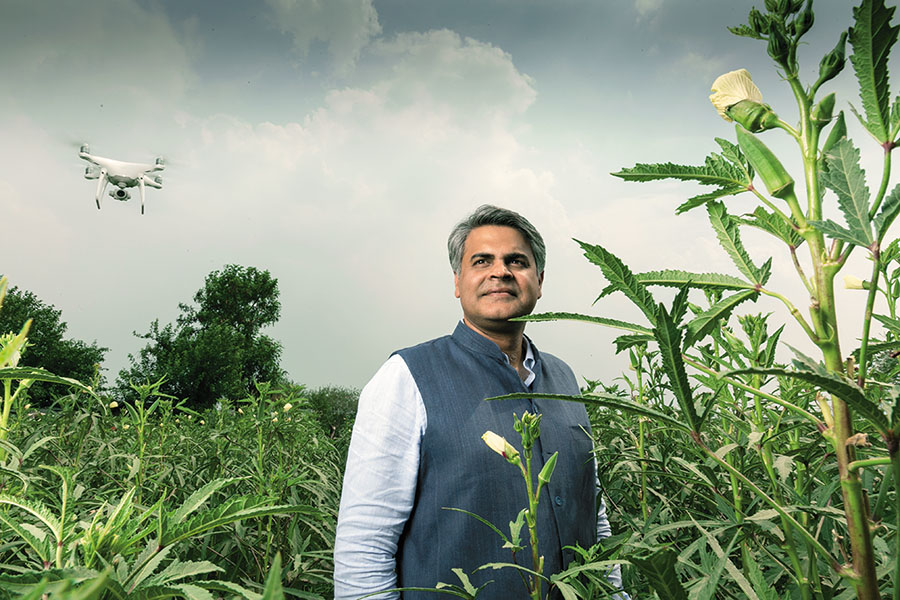 “He may not even be aware of that,” laughs Jatin Singh, 42, founder and managing director of Skymet, as he recalls how Roy’s channel Sahara Samay was his first client in 2003, when Singh, a television journalist, had just started Skymet. “It was happenstance. But that was one of the inflection points in the journey of Skymet.”

Since then, however, particularly over the past eight years, Skymet has beaten the country’s 144-year-old public weather forecaster, the Indian Meteorological Department (IMD), on six occasions in accurately predicting the monsoons, claims Singh. This year Skymet has announced “below normal” rainfall, while IMD has predicted it will be “near normal”.

Accurately predicting weather patterns, particularly the monsoons, which account for about 70 percent of the country’s total rainfall, is important in an agrarian economy like India. Accurate predictions not only help farmers plan their crop patterns and sowing timings, but also help governments prepare for droughts, insurance companies strategise their offerings, and power companies prepare for peak demand. Skymet has about 6,500 observation centres that provide real-time data on rainfall, thunder, lightning, and heat.

“Our predictions don’t really generate revenue,” says Singh. “If I want to make money out of predictions, I have to break through the Great Wall of China, because most cell phones come with inbuilt weather apps from Accuweather or IBM.”

But Singh is clear about continuing with weather predictions. “We have been giving IMD a good fight every year. The competition has actually improved their predictions and complacency,” he says. “We want to get the predictions right because I want to prove to the world that forecasting the monsoons isn’t as tough as it is made out to be.”

Forecasting a future
In 2002, when Singh was a journalist with television channel Aaj Tak, he was appalled at how weather reports were delivered. Data from IMD arrived as a cyclostyled sheet with a chart that showed maximum and minimum temperatures. The days of 24-hour news channels were just beginning, and they were looking to make weather forecasts more appealing.

“I knew where the data was; I just had to package it better,” Singh says. Much of his interest in weather forecasting was because of his father, who worked as a vendor of computers and instruments for IMD, and later also offered him office space while he was setting up his business. So, with the help of an assistant, Singh would jot down IMD’s forecast, and use Adobe Photoshop to make the visuals more appealing.

His first client was Sahara Samay, where he would deliver a CD every day, and which paid him an exorbitant amount of ₹18 lakh a year. Eventually he began to sell his data to newspapers too, such as The Hindu and Hindustan Times. Within two years, Singh was making ₹2 crore per year, prompting him to begin work on a forecasting model.

“The US government puts out so much free weather data that you can actually generate forecasts,” Singh says, who began by sourcing data from the US-based National Oceanic and Atmospheric Administration, and hired meteorological experts from the Indian Air Force.

Singh also sensed an opportunity in the power sector, where Skymet would provide electricity distributors with data on temperature, rainfall, humidity and wind speed every 15 minutes, which could be used to predict energy requirements. Companies such as Tata Power and Reliance Energy were among his clients.

Going rural
By 2008, Singh’s business was flourishing, although its focus was largely urban. That’s when phone makers Nokia introduced Nokia Life Tools, a service to provide farmers with information on seeds, fertilisers, pesticides, market prices, and weather conditions. Singh partnered with Nokia to provide the weather data for a fee. The business had been primarily aimed at rural India, and Skymet was also being noticed by companies such as Thomson Reuters, Rallis India, Monsanto and Bayer, who became its clients.

However, by 2010, the year Singh reckons as the last year the Indian economy really grew, the business began to see setbacks. Sahara Samay, which contributed largely to Skymet’s media business, was winding up, and Singh knew he had to look elsewhere for more opportunities.

In 2010, Skymet got a grant of ₹25 lakh from Villgro, India’s oldest social enterprise incubator, which it used to build technology. In 2011, agri-tech venture fund Omnivore Capital, backed by the Godrej Group, invested $1 million in Skymet, the fund’s first investment in India.

“What we saw, and what remains true in general is that the weather and agri-risk business in India was something of a black box,” says Mark Kahn, co-founder of Omnivore. “Nobody really had any predictive analysis or data on the sector. We sensed an opportunity to build a platform that could help farmers, banks and others.”

But just as funding started coming in, the Indian economy stagnated. The slowdown in the power sector, coupled with the death of Sahara Samay, made Singh turn his attention elsewhere. Current CEO Yogesh Patil, then an employee, suggested instrumentation.

Course correction
Singh had initially been sceptical about instrumentation, mainly because it involved engineering and the setting up of weather sensing stations across the country. “But I realised this was the only game in town,” Singh says. Venturing into instrumentation also meant focussing on weather-based crop insurance schemes.

Around the same time, Singh also found company in Dev Raj Sikka, former director of the Indian Institute of Tropical Meteorology and widely known as ‘monsoon man’ for his role in helping scientists develop better prediction systems. Singh says Sikka had figured out a way to accurately predict the monsoons as early as 1980, by studying over 100 years of data, but IMD never made use of it. With Sikka’s guidance, Skymet also made its first prediction in 2012.

However, Singh continues to make monsoon predictions. That’s primarily because they brought the company instant recognition. Barring 2015, when its predictions were entirely off the mark, it has managed to give IMD a tough fight.

India’s weather forecasting service market was valued at $26.63 million in 2018 and is expected to reach $45.16 million by the end of 2025, growing at a CAGR of 7.84 percent, according to China-based BisReport Consulting. Of this, in 2018, the IMD controls 58.6 percent, while Skymet controls about 12 percent.

Branching out
Today, Skymet has become far more than just a weather forecaster. In 2014, it raised close to ₹25 crore from UK-based DMGT group, while in 2017 it raised an undisclosed amount from the German government’s InsuResilience Investment Fund. In 2017, Singh set up a company, Gram Cover, which offers insurance products such as life insurance, crop insurance, and livestock insurance to rural households.

A bulk of Skymet’s topline continues to come from its agri-tech play. “My money’s coming from subscriptions to our data from government, insurance companies, and banks,” Singh says. “We have gone from being a pure weather forecasting company to a full-fledged agri-risk management company. We help the government price and settle claims, manage disasters, and expose fraud.”

“There are already a few companies engaged in the work that Skymet does, such as Agnext and Agrisk,” says Nitin Puri, senior president and global head-food, agri strategic advisory and research, Yes Bank. “There are many structural problems in the sector, and the insurance companies too have been struggling. Much of it is because of government subsidies, which make the government the customer of insurance providers; there’s also the credit culture where every few years loans are waived off. So, when there is so much uncertainty in the fundamentals of the insurance business, it will impact companies like Skymet.”

Meanwhile, Singh is gearing up to solve problems that he reckons could have been solved sooner, had the government partnered with private companies. “I want to map every farmer, soil moisture, field, every pest with the help of drones, and I would not charge a rupee,” he says. “I would still have a business model. However, the rules don’t allow me to launch a satellite on the PSLV. Why should an Indian entrepreneur pay SpaceX? This mentality needs to change.”

Over the next few years, Skymet will turn its attention to solving human-made environmental catastrophes, including urban flooding and pollution. The company has already set up over 100 weather stations across Mumbai to provide accurate information about rain and waterlogging through its app and website. “Every television channel in the US has a Doppler weather radar,” Singh says. “Right now, using my weather stations, I am able to make the forecast once the rains hit the rain gauge. But if I had a radar, then I would be able to catch the molecule of water before it comes to Mumbai.”