From coolers and artificial ponds to sensors and drones, we take a look at innovative tools that are increasing farm productivity and farmers' income 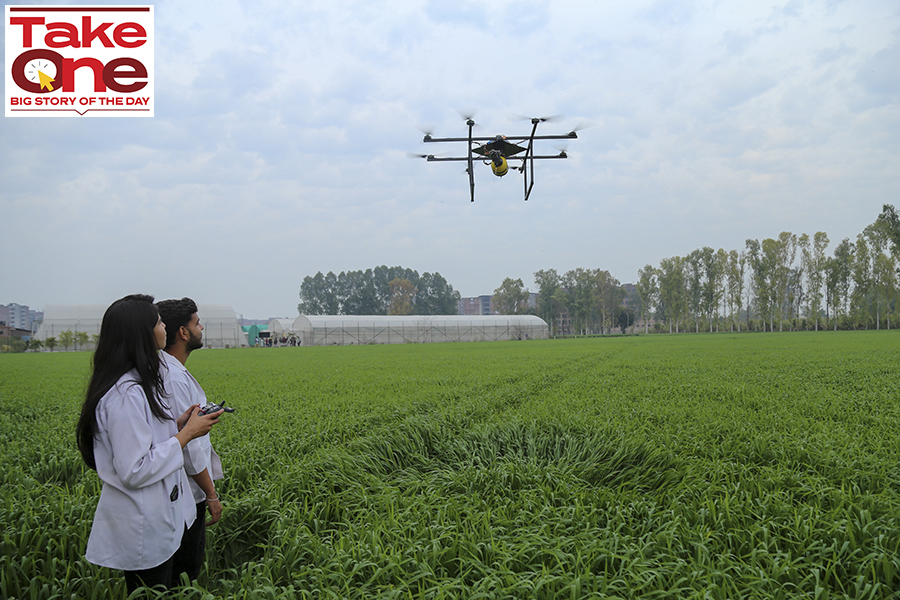 The Flying Farmer is a drone-like wireless and sensor device that can be used to estimate the nutrient content of the soil, detect the exact position of weeds and spray pesticides.

From tools to help detect soil conditions and its moisture level, to coolers and artificial ponds, startups and organisations have innovated to help farmers get real-time and accurate data, or have access to resources to preserve and increase their harvest. According to India Brand Equity Foundation (IBEF), a trust established by the Department of Commerce, Ministry of Commerce and Industry, agriculture is the primary source of livelihood for about 58 percent people in India. These include marginal farmers, whom the startups are looking to empower and eliminate middlemen as far as possible. Use of one such innovation, the Subjee Cooler, an affordable and no-maintenance cooler, has helped Poornima Naik, an Odisha-based farmer. Parmeshwar Kamble, another farmer from Aurangabad has availed of the Jalsanchay, a pond liner that acts as a reservoir during dry months. “I have not only been able to water my field, but also breed fish in the pond. My income has doubled,” he says. We look at some of these innovations and how farmers have benefitted from them. 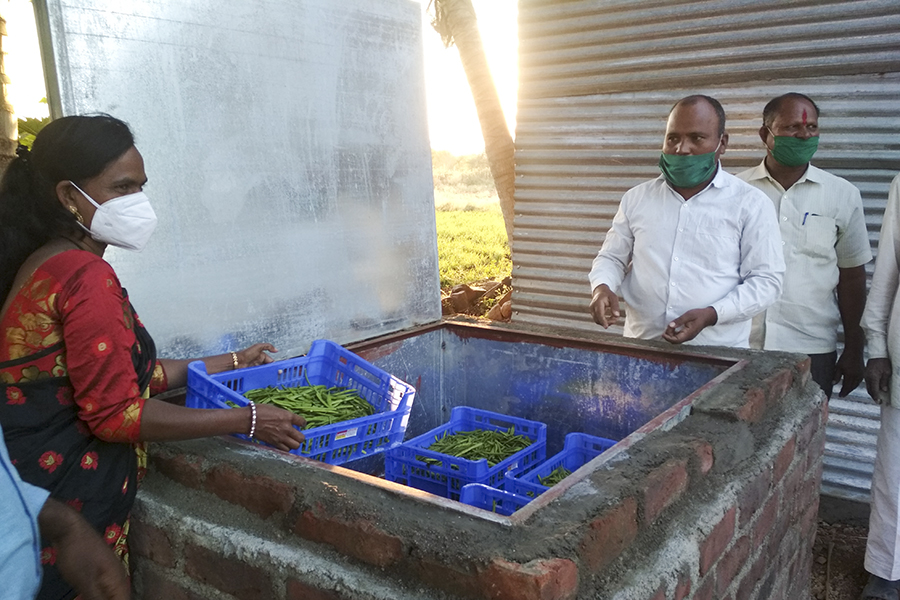 The Subjee Cooler is a brick-and-mortar storage facility that helps farmers store up to 100 kg of vegetables for a week Subjee Cooler On a field visit to meet farmers across Maharashtra and Odisha, Vikash Jha, an IIT-Bombay alumnus, learnt that farmers were grappling with the problem of lack of space to store their unsold produce. As a result, they were forced to make distress sales and incur losses. In 2017, Jha, along with four other members of IIT-Bombay, made Subjee Cooler, an affordable and no-maintenance vegetable cooler that helps farmers harvest their produce when they want to and store it for a time that earns them better prices. After two years of research and testing their prototype, Jha’s team sold their first model in 2019, and has till date benefitted 200 farmers across the two states. “Usual storage facilities cost nothing less than Rs 12 lakh to Rs 15 lakh. We wanted to make something keeping marginal farmers in mind as they have other costs to think about—seeds, irrigation, labour, etc,” says Jha, CEO of RuKart Technologies, which built the Subjee Cooler. It costs somewhere between Rs 40,000 and Rs 45,000 depending on the size. “But it’s a one-time investment that needs no electricity, just water, and has no recurring costs,” he adds. The brick-and-mortar storage facility comes with a galvanised iron tank that works on the principle of evaporative cooling: Once the water evaporates, it draws energy from its surroundings to produce a cooling effect. With nitrogen balls in the cooling chamber, the temperature of the tank remains at least 5-15 degrees lower than the ambient temperature, which also helps it maintain the humidity inside. A Subjee Cooler can store up to 100 kg of vegetables for a week. “Earlier, a farmer used to harvest vegetables and fruits only once a week, probably a day before they would go to the weekly market, as they couldn’t store them,” says Jha. “With our product, farmers have told us they can do it twice or thrice a week. And since vegetables can now mature inside the cooler, the farmers have been able to reduce losses from overripened or matured produce.” Poornima Naik, an organic farmer from Odisha says she makes an additional income of Rs 600 to Rs 1,000 every week, thanks to the Subjee Cooler. “Without it, I’d have to sell the produce for very low prices or feed it to the cattle.” 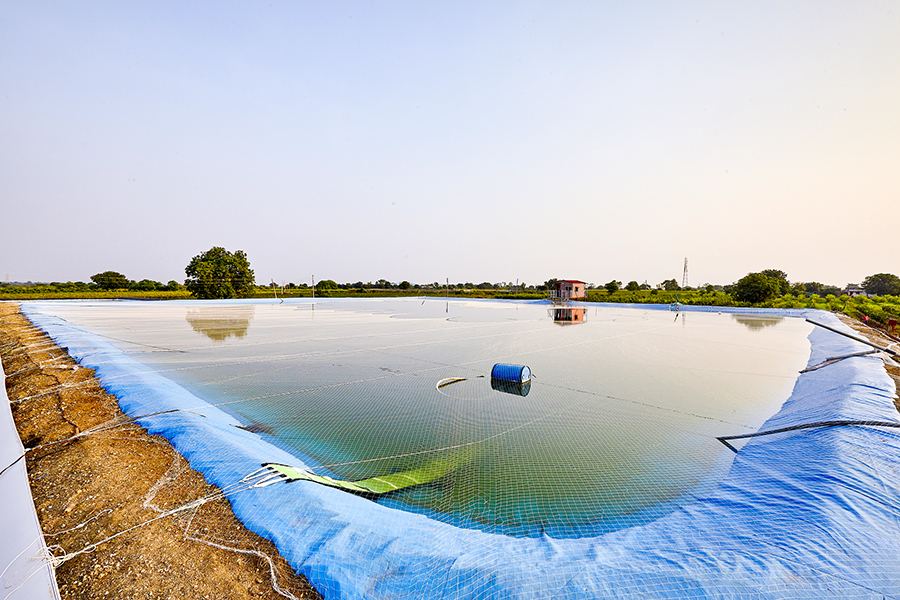 Jalsanchay: An artificial pond Maithili Appalwar, 24, CEO at Avana Technologies, has come up with a water conservation solution for poor, marginal farmers, that, she says, has helped increase their income by 98 percent. The solution is simple: Christened Jalsanchay, Appalwar’s team creates artificial ponds on farms using recyclable polymer, costing farmers one-tenth of traditional water conservation methods. The three-year-old startup has built 13,505 ponds and helped conserve 54 billion litres of water in Maharashtra, Karnataka, Rajasthan, Madhya Pradesh, Andhra Pradesh, Punjab and Haryana. The artificial pond captures rainwater and surplus water from rivers, which can then be used to irrigate farms. It can cost a farmer approximately Rs 2 lakh and it can store up to 45 to 50 lakh litres. “With Jalsanchay, no farmer has to depend on the government or even the rains for harvesting. The aim is to make every farmer self-reliant,” says Appalwar. For 44-year-old Parmeshwar Kamble, a crop and fish farmer from Aurangabad, had it not been for Jalsanchay, he would have lost his chiku plantation last year because the region did not receive any rainfall. Kamble has been using the artificial pond for the past four years. It has not only helped him water his crops but he has also been able to harvest fish in the pond as well. “In the eight months that we don’t receive rainfall, the pond’s water is enough to irrigate my farm that spreads over two acres. I can water the field all day, unlike other farmers who depend on electricity or generators or have no option but to pray for normal rainfall,” Kamble says. 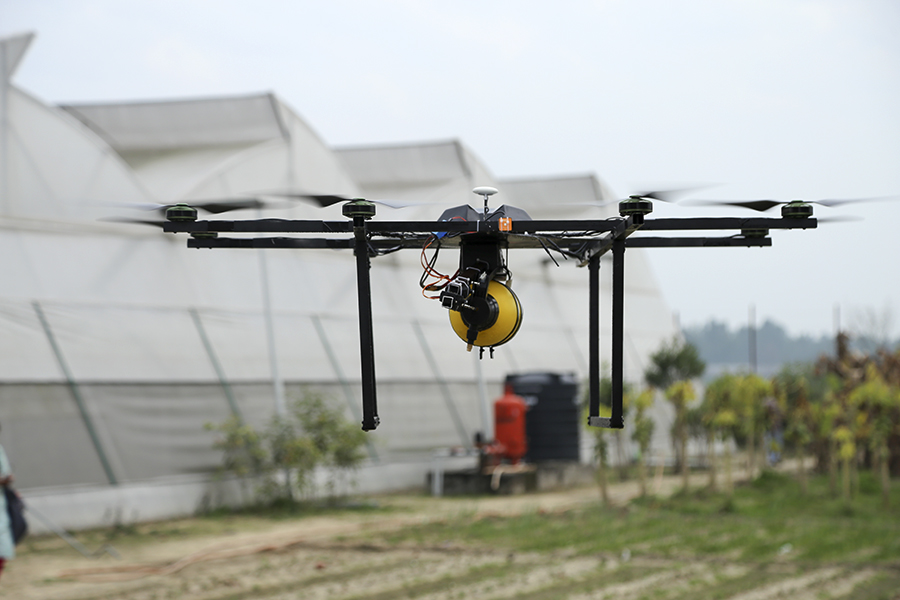 Flying Farmer: A drone for pesticide treatment Forty-five students and five faculty members from Punjab’s Lovely Professional University (LPU) have conceptualised a technology that will help farmers deal with two major problems—weed detection and pesticide treatment. The Flying Farmer is a drone-like wireless and sensor device that can be used for mapping and surveying yields and biomass. In addition, it can also estimate the nutrient content of the soil, reducing crop damage and aid production. These pre-programmed drones can target specific areas on the farm to spray pesticides too. “This is beneficial in two ways,” says Pratham Mittal, head of new initiatives at LPU. “One, it avoids wastage of pesticides, and two, also prevents their overuse.” These drones, programmed with computer vision algorithms and infrared sensors can also detect the exact position of weeds and transmit information to the farmer to take timely action. “The human eye is prone to error. This can lead to lower produce,” says Mittal. Each drone can fly up to 25 minutes and costs anywhere between Rs 10,000 and Rs 15,000. Currently in its testing phase, the makers have observed that it is helping farmers save pesticide costs by at least 85 percent, and a lot of time too. “What would take a farmer a week or two to spray pesticides or check for weeds is taking only a couple hours,” Mittal says. In another six months, the Flying Farmer will be ready for sale. “We will not file for a patent but open source the technology so it’s inexpensive and available for any farmer in the country,” he says. 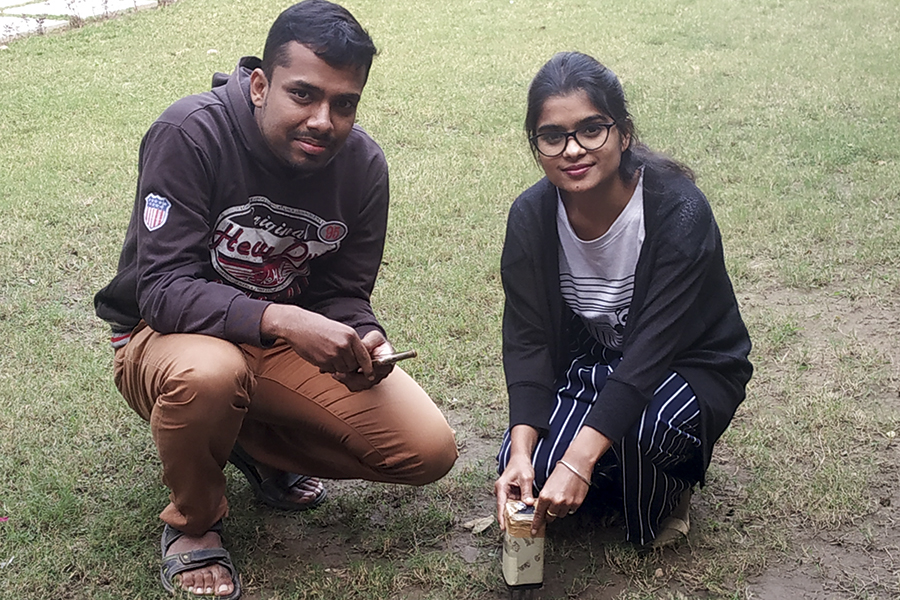 Harsh Agrawal and Nikita Tiwari, co-founders, NeerX Shool: A sensor for microclimate information Two engineering students from Ahmedabad's Nirma University and Raipur-based National Institute of Technology have developed a sensor called Shool to enable farmers who have either no or rather limited access to technology that gives them real-time and accurate data on microclimate information (the climate conditions of a small area). Since its application in farms since 2019, this smart sensor has helped farmers prevent pest infestation, improve water and fertiliser retention, and improve productivity, says Harsh Agrawal, co-founder of NeerX, a startup currently incubated and mentored by CrADLE, the business incubator of Ahmedabad-based Entrepreneurship Development Institute of India. “Our sensor has been thoroughly tested and validated by Isro and the Indian Agriculture Research Institute with a reported accuracy of more than 97 percent,” says Agrawal. Determined by crop type, land topology and region, the Shool sensors are planted in the field and the data gathered is displayed on an app on a mobile phone. “It’s not necessary that farmers have smartphones. A basic phone works just fine as the data can be delivered over text messages as well,” says Agrawal. “With the sensor, farmers can know when and how much to irrigate and this helps in improving the quantity as well the quality of the produce.” Till date, Shool has reached more than 5,000 farmers across six states. For a business-to-government or busines-to-business customer, they are priced between Rs 15,000 and Rs 50,000 depending on the size of the land, the type of crop and the land topology. “However, the sensors are also available on a subscription basis for farmers, wherein they can rent it for their harvesting season. That would cost them Rs 1,000 to Rs 2,000 a month,” says Agrawal. Skylo: An end-to-end machine data solution From tractors and fishing boats, to mining equipment or electrical grids, Skylo is an end-to-end machine data solution that has benefitted fishermen, farmers, and truck drivers by giving them up-to-the-minute information, therefore, helping them make better decisions, and save time and money. It was launched in December 2020. Skylo is a small device that connects machines so they can start sharing data. This data is then made available to people via a mobile or desktop to help users take immediate action. “Imagine fishing boats that send SOS signals while at sea; sensors that inform about soil nutrition in real time; trucks that provide early warnings before breaking down. Skylo is working with multiple governments, industries, and individuals to test and deploy systems that do these things and much more,” says Parth Trivedi, CEO, Skylo Technologies. With Skylo, farmers can dig deeper into their operations by sensing various aspects of their business including soil pH, irrigation and moisture levels and also sense and measure farming equipment and usage habits to keep their machines healthy. Tractors, harvesters and other farm equipment with Skylo connectivity can be remotely tracked and monitored. Farmers can monitor where farming equipment is and know its fuel levels at all times; check on the equipment to understand how it’s being used and if it’s in good shape, benefit from predictive maintenance alerts; get alerts when something needs to be fixed or adjusted to ensure minimal downtime, and keep an eye on assets and ensure renters are taking good care of equipment. “Using the Skylo Platform, farmers receive up-to-the-minute, critical alerts and continuous monitoring of their operations so they can make better decisions about crops and yields each season, and also receive daily (or hourly) emergency alerts, allowing them to take immediate action before a disaster should occur (like a broken irrigation system, for example),” explains Trivedi. As a result, farmers see improvements year-over-year, experience reduced operating cost, increased yield, crop sustainability and health.

Tweets by @forbesindia
China wanted to show off its vaccines. It's backfiring
Litigation Finance in India: An overview by Prateek Bagaria