Despite formidable stock returns in the defence sector, analysts feel there is further steam left in it on the back of robust order books and improving earnings quality 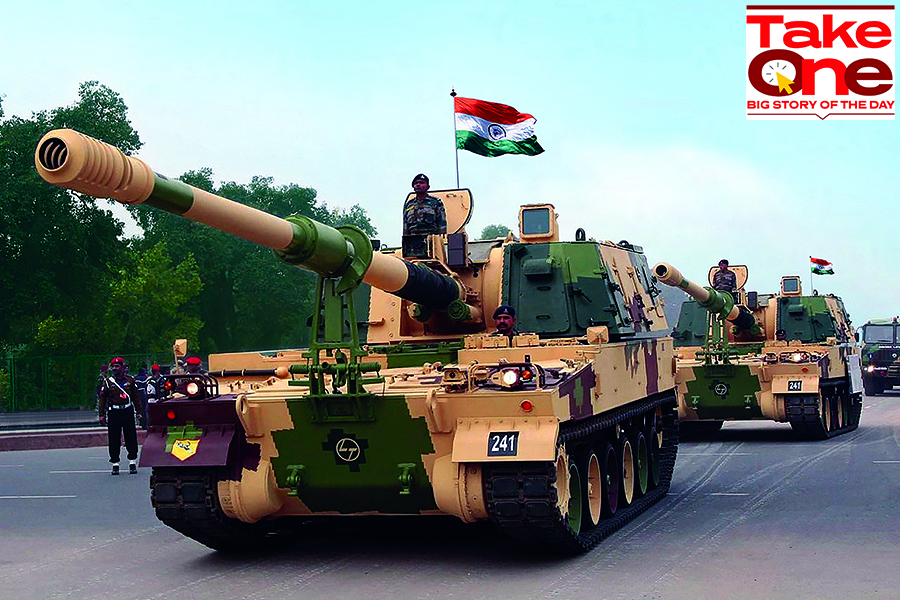 India’s defence sector has undergone major reforms as the government is trying to strengthen the nation’s defence prowess by reducing dependence on imports.

Sachin Trivedi, head of research and fund manager, Equity, UTI AMC, believes that the defence sector is still favourably placed, given the opportunity size (domestic and export) and potential growth over many years. Recent conflicts closer to India, Europe, and other parts of the world strengthened the urgency and need to increase capex and localise production, which made the sector attractive to investments.

“In recent conflicts, we have seen the importance of new defence equipment such as drones, anti-drone systems, missiles, air-defence systems, etc. Countries at war have struggled to get reliable supplies during a tough time. Therefore, India can’t afford to rely on the external supply of equipment and critical components. Thus, pushing for localisation of production is essential, which will generate large and sustainable opportunities for domestic players,” Trivedi says.

India’s defence sector has undergone major reforms as the government is trying to strengthen the nation’s defence prowess by reducing dependence on imports. Measures such as simplification of procedure for procurement of defence products, provision for funding of up to 70 percent of development cost by the government, and a hike in foreign direct investment (FDI) to 74 percent through the automatic route are expected to further boost investments in the sector.

“In addition, the Ministry of Defence has banned the import of several components over a period of time, thus encouraging indigenisation. This clearly shows the favourable tilt of policy framework for defence companies,” says Gaurav Dua, head, Capital Market Strategy, Sharekhan by BNP Paribas. Indigenisation in the defence sector refers to increasing manufacturing capacity within the country, create research and development, and boost exports.

The government has introduced a series of booster schemes and measures that have resulted in a steady flow of capital and investment opportunities in the sector. The cumulative FDI inflow in the defence industry stands at $15.71 million, during the period April 2000 to September 2022, according to the Make In India website. Earlier in 2020, the government had increased the FDI limit to 74 percent from 49 percent, under the automatic route, and up to 100 percent through the government route in the defence sector. 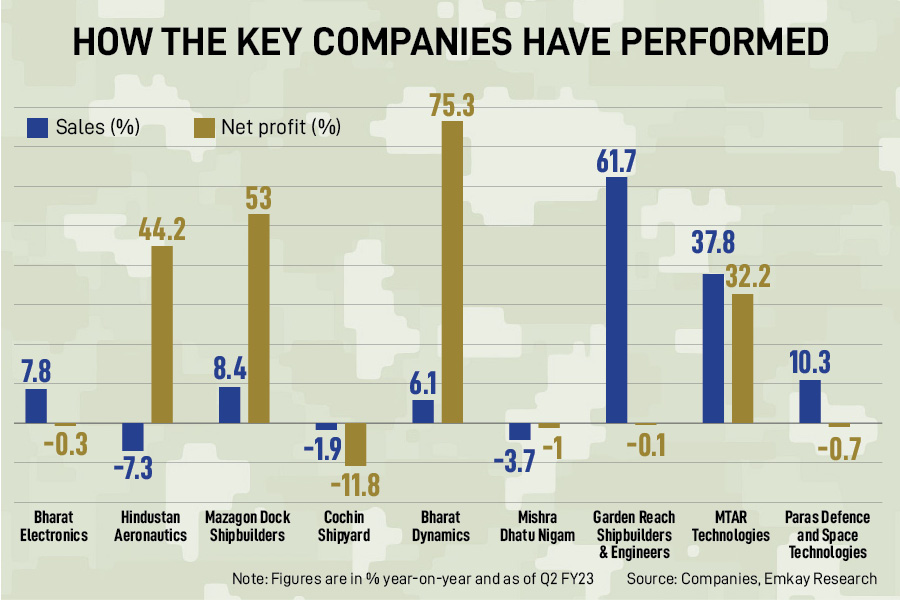 According to government data, India has around 194 defence start-ups building innovative tech solutions. The government has set a target of Rs 1.75 lakh crore of defence production by 2025, which includes export of Rs 35,000 crore. The Budget outlay for FY23 has been fixed at Rs 5.3 trillion, a 10 percent increase over last year.

“The Indian private sector has grown since opening of the defence sector and evolved from producing components and sub-systems, to developing complete equipment and systems, system of systems and platform level solutions,” says Jayant D Patil, member of executive committee and advisor (Defence and Smart Technologies), to CEO and MD, L&T.

“This is clearly visible from the quantum [more than 90 percent] of defence exports by private defence companies. Going forward, the industry looks forward to stepping up and empowering itself with latest manufacturing practices including industry 4.0, for efficient serial production and additive manufacturing towards faster development and limited series production of high-tech parts agglomeration,” Patil adds.

Key defence stocks like Bharat Electronics, Hindustan Aeronautics, Bharat Dynamics, Solar Industries, Garden Reach Shipbuilders & Engineers, Cochin Shipyard and Data Patterns have jumped 30 to 145 percent in 2022 so far, outperforming benchmark indices Sensex and Nifty in this period. Despite formidable stock returns of over 70 percent on average over a year, Amit Dixit, analyst, ICICI Securities feels there is further steam left in the sector on the back of robust order books and improving earnings quality.

However, valuations in certain stocks seem to have run ahead of fundamental post the sharp rally in the past few quarters. So, investors need to have mid-to-long term investment horizons to make meaningful gains from investments in the defence sector, cautions Dua.

Based on the September-quarter earnings, order books of most defence sector companies are expected to grow, margins are likely to expand on sourcing efficiencies, focus on enhancing exports and peak earnings are likely for naval shipyard companies by FY25.

“All the companies mentioned that the order book position is likely to improve further compared to the first half of FY23. Almost all the companies under our coverage reported higher margins year-on-year and quarterly basis owing to change in product mix [Hindustan Aeronautics and Astro Microwave] and raw material efficiencies [Mishra Dhatu Nigam, HAL and Solar Industries]. All in all, the companies have raised their revenue/margin guidance for FY23,” adds Dixit.

Post September-quarter earnings, HAL has raised earnings before interest, taxes, depreciation, and amortisation (Ebitda) margin guidance to 26 to 27 percent. BEL has raised the lower-end of Ebitda guidance to 22 to 23 percent from 21 to 23 percent earlier and reiterated revenue growth guidance of 15 percent. Solar Industries has raised its revenue growth guidance for FY23 to 50 percent (year-on-year). Astra Microwave expects Q3FY23 revenue at Rs 200 crore while estimating FY23 and FY24 revenue at Rs 850 crore and Rs 1,000 crore respectively. 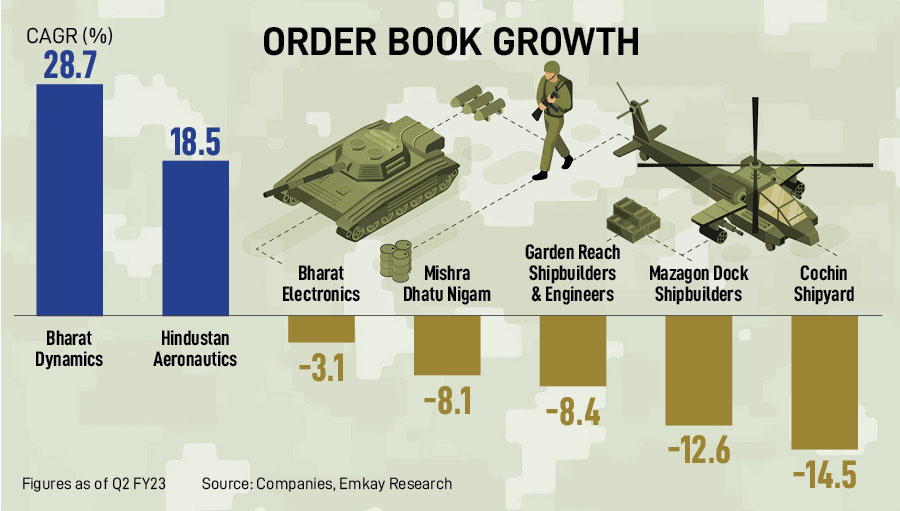 L&T’s current order book for defence is around Rs 14,000 crore, which is about 3.8 percent of its consolidated order book of Rs 3.72 lakh crore.  “This is expected to move northwards with a robust pipeline of orders, with few being significant in value, by the end of the current financial year closure, with a leeway of a quarter here or there. The defence engineering business of L&T had reported significant increase in order inflow in FY21-22 across multiple segments of its portfolio. The major orders in this comprise multi-purpose vessels being constructed at our shipyard, and multiple naval and land based-weapon and engineering systems,” says Patil.

Defence and aerospace electronics solutions provider Data Patterns expects Rs 200-250 crore worth of orders in the remaining period of FY23. Data Patterns plans to deliver upwards of Rs 400 crore in FY23. Its order book at the end of Q2FY23 was Rs 837 crore, with an order intake of Rs 471 crore in first half of FY23.

“With orders received in October 2022 of Rs 47 crore and orders negotiated and finalised of Rs 128 crore, the order book was Rs 1,012 crore at the end of October. Data Patterns’ order book increased from Rs 181 crore at the end of FY19 to Rs 476 crore as on March 2022. Increase in order book was mainly due to repeat production contracts for products already developed and accepted by the customers. We expect our order book to grow to Rs 2,000-3,000 crore in the next three to five years based on potential repeat contracts. We are also participating in many MoD tenders; success in such tenders will add to our order book,” says Srinivasagopalan Rangarajan, chairman and managing director, Data Patterns.

IdeaForge, manufacturer and supplier of drones, has grown its revenue by 10 times in the last two fiscal years as push for Make in India products, simplification of drone regulations, the PLI scheme and the Prime Minister’s initiative to make India into the “Drone hub of the World” by 2030 has opened up multiple applications for drones in India. “The fast track procurements that happened post the Galwan incident and the Armenia-Azerbaijan war in 2020 led to a rapid procurement of our drones for our northern borders and further repeat orders for the same accentuated the acute need for homemade drones as well the confidence of the Indian Army in our capability to deliver,” says Ankit Mehta, co-founder and CEO, IdeaForge.

According to Trivedi, the defence sector is prone to risks. “This sector is prone to long delays in order finalisations and deliveries, given the customer's need for extensive trials. Another challenge for the investor is assessing the players' capabilities, as we may overestimate the company's ability. And as the industry grows, it will attract newer players, putting pressure on their profitability,” he says. Another issue, Trivedi points out, is that many private sector defence businesses are either unlisted or part of large listed conglomerates. “Few listed standalone defence businesses still need to achieve the desirable scale. So the private sector valuations should be looked at in the context of the individual company's ability to scale up,” he adds.

Others concur. “As there are frequent changes, priorities and procurement schemes get modified and delayed considerably. Normal capital procurement process takes a long period from RFI to RFP as well as from RFP to contract. The actual time taken is far higher than the stipulated time frame.  Such frequent delays disrupt the plans and investments made by the Indian defence industry as well as their financials. Acquisition plans are made in three stages: 15-year, five-year and two-year. There has to be a focussed effort by the government as well as services on sticking to two-year acquisitions made by services for each financial year and accountability has to be brought in for delays,” says Rangarajan. 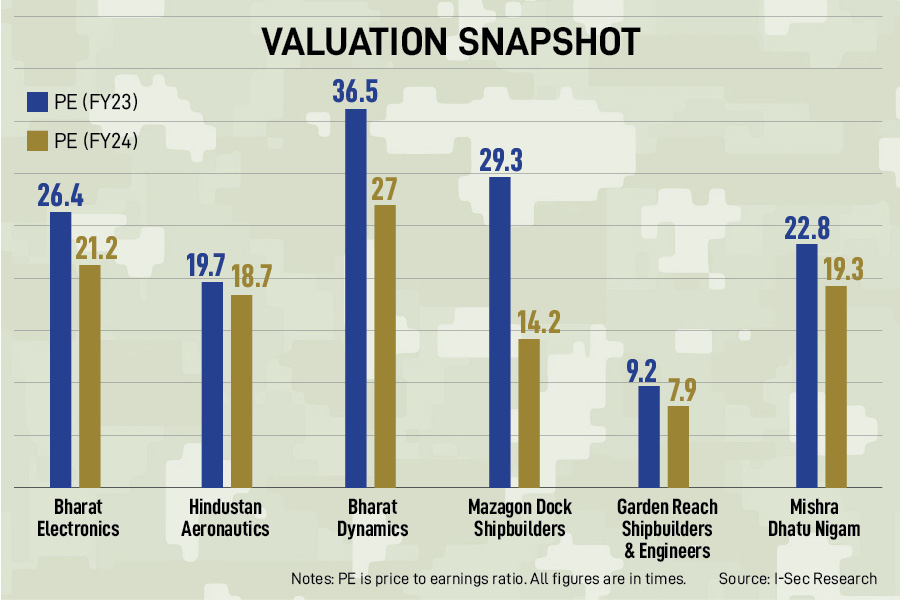 Rangarajan expects the government to extend PLI schemes for defence equipment manufacturing companies and offer incentives to domestic manufacturers in the upcoming Budget. “Tax holidays for new investments in the defence manufacturing sector will motivate existing players to expand their activities and new players to making investments. The government may also consider additional tax deductions and incentives for R&D in the defence sector,” he says.

According to Trivedi, while India’s defence budget to gross domestic product (GDP) 2 percent looks comparable to other economies, there is a need to increase allocation towards acquiring capital equipment.

He adds that to achieve self-reliance, defence has a priority position as it saves the country’s forex and assures the smooth supply of defence equipment in times of geo-political conflicts. Further, as we develop the local value chain of the defence Industry, Indian companies will start to win more export opportunities. The multi-domain engineering talent pool, low manufacturing cost and cordial relations with most nations make us well placed to grab the potential export opportunity.

Tweets by @forbesindia
Binance buys Sakura in a bid to make a fresh entry into Japan
Brian Stafford at Diligent on tech for the modern board's complex challenges, and plans in India