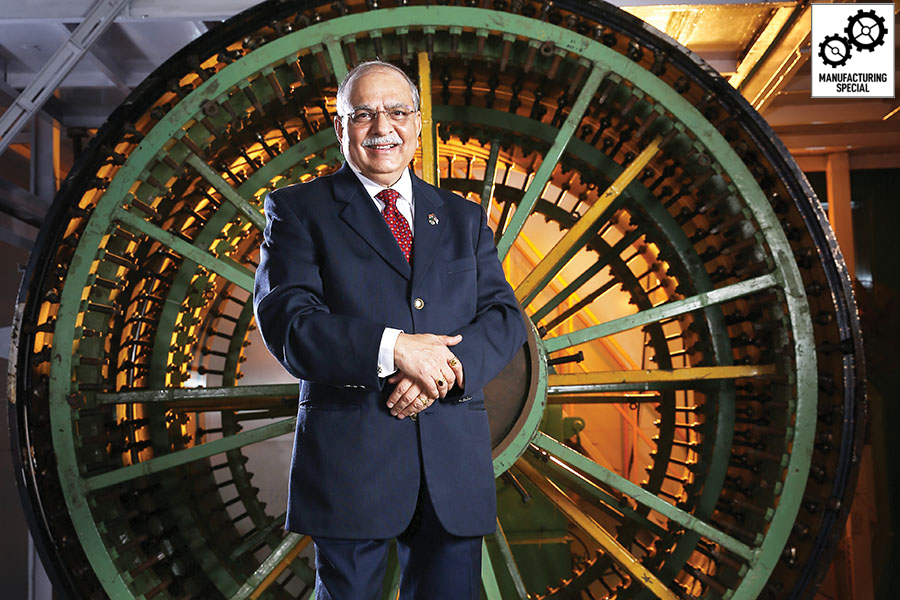 When it comes to hitting a target at war, whether on land, in the sea or in the air, precision is everything. Miss, and you in turn become the target because you have revealed yourself and your position. From warships to submarines and unmanned armoured systems to missiles, precision is what also comes into play while manufacturing these defence capabilities at Larsen and Toubro’s (L&T) plants across India—with the use of Industry 4.0, including automation, Internet of Things and artificial intelligence.

Take, for instance, the process of building a ship. The metal fabrication and cutting of plates happen through a server connected to the final cutting machine using CNC (computer numerical control), where a machine processes the material with precision in order to meet specifications by following programmed instructions—without a manual operator directly controlling the machine operation. Even as the material is being fabricated, a laser scanner keeps an eye on the dimensions and integrity, so that the smallest distortion or slightest variation from the original dimensions is corrected before the job is finished.

And while conventional methods would involve building of the hull and decks, then cutting through the decks to put in the cables, pipes and equipment and welding it back again, at L&T’s plants, the process involves the coming together of sections and blocks, with pipes, cables and equipment being fitted in at various stages alongside. Sections come together into blocks, blocks into mega blocks and then superblocks, four of which would make the entire ship.

“So before the ship is fully assembled or the hull is assembled, you have more or less 80-85 percent of the work on the ship complete,” says JD Patil, whole-time director and senior executive vice president for L&T’s defence business and new age smart technology businesses.

Digitalisation of processes means that every single nut, bolt and washer is accounted for, and every pipe and cable is barcoded to fit in the right place—a system that would appear to work particularly well in the making of submersibles and submarines. The physical fitments (or components) in the case of warships and submarines, points out Patil, can be anywhere between a few lakhs to 25 lakhs.

“The total bill of material in case of a complex platform with their physical fitments, including, say, a smallest lock and washer or a nut and a bolt can run into millions,” says Patil.

When you have a few million parts, it matters that you know the precise weight and its effect on the CG (centre of gravity) in the overall ship, because otherwise you produce a ship which may lean on any one given side. This might not be as critical on warships, he adds, but it is critical in the case of submarines since the difference between weight and buoyancy is less than five percent. “If the weight goes higher, the submarine will never surface.”

L&T’s defence business took the path of digitalisation almost over a decade before anyone was even talking of digital. A couple of factors came together for this. In 1992, when L&T was still a small ₹1,000 crore business, the company secured a one-time licence to build four oil and gas platforms. The deadline for the contract was 14 months, a tall order. But the signing process took two months, giving them a cycle time of 16 months, and they finished ahead of schedule. Not only did they save on LD (Liquidated Damages, which for them as beginners was 10 percent), but they also made a substantial profit. While this was a contract for what was to later become L&T Hydrocarbon (in a different department), Patil’s team, which had earlier worked with Dr APJ Abdul Kalam to build weapon systems and had been doing development work for the Defence Research and Development Organisation (DRDO), had realised the importance of using 3D rather than 2D designs for these projects, something that would require considerable research and development investments.

“So that profit, and my requirement to make these investments, more or less came at the same point in time. My boss at that time, KV (K Venkataramanan, then CEO and MD of L&T), was rolling in money having saved his LD and he said, ‘What all do you want, tereko kya chahiye?’” says Patil, snapping his fingers in his office in Powai, Mumbai. “You can’t do complex systems without a full-fledged 3D environment. And to put money behind it, we needed a couple of crores, and a couple of crores was readily coming.” That, says Patil—who joined the company through a campus placement from IIT-Bombay over four decades ago, and who then headed R&D—paved the way for “differentiated engineering” in the company.

In 1992, they moved to 3D design. “We made an environment where you do the design and the analysis. Production was a loose end, because you couldn’t do production. After design analysis, you would take a drawing extraction (the drawing taken as an extract from the 3D models) and give it to the shop floor,” recalls Patil, who spearheaded the company’s foray in the defence sector since the inception of this segment in L&T in the mid-80s.

Considering the risks associated with the sector they operated in, around 2007-08, the business migrated to looking at drawings only on screen, and the entire documentation process of making and checking too shifted to digital. 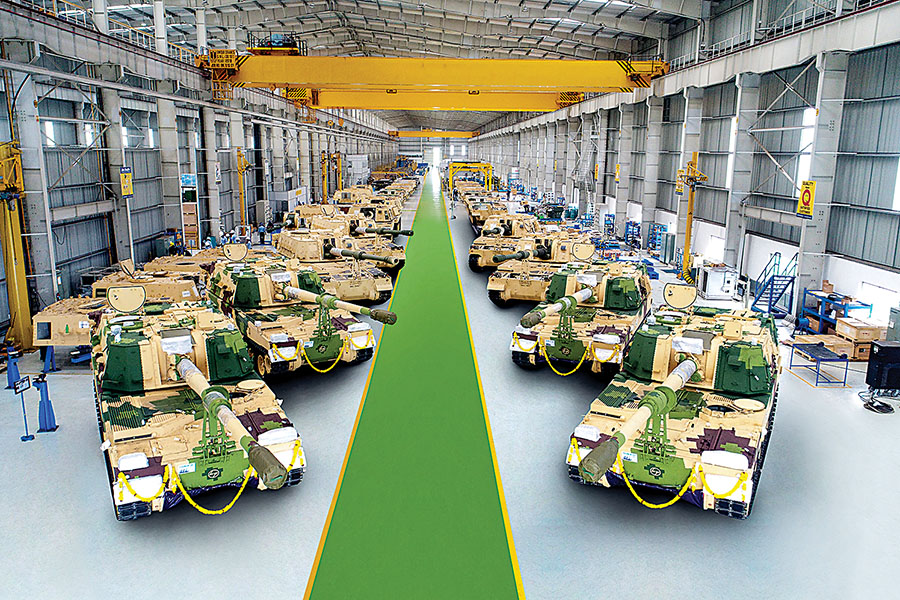 A couple of years down the line, the investment in technology and move to 3D led to a project for full-fledged submersibles, “very complex jobs, completely undoable without 3D”. While they had been doing weapon systems for the DRDO, in 1995 they also started doing projects for the Navy. “Today there are about one-and-a-half dozen classes of weapon systems that we develop that are used by the Navy,” says Patil.

Though participation of the private sector in defence was still a few years away—the government cleared the decks in 2001—the company continued to invest in technology and build facilities. The defence business, initiated in Powai, had units at Hazira in Gujarat and in Baroda, and subsequently another four full-fledged defence units were created. In 2006-07, they commissioned a factory in Talegaon near Pune for weapon and engineering systems and equipment for the armed forces, while in 2010, they designed and built a shipyard in-house at Kattupalli near Chennai. “We built another ultra-high precision manufacturing unit in Coimbatore, which then became the manufacturing unit for missile sections and systems,” says Patil. The team at Coimbatore also manages realisation of rocket motors and solid and booster stages of PSLV rockets. Another R&D centre, a satellite of the one in Mumbai, was also created in Bengaluru.

The latest addition to the AM Naik Heavy Engineering Complex in Hazira is the Armoured Systems Complex (ASC), a 50-acre facility created to manufacture, integrate and test advanced military armoured platforms such as self-propelled howitzers, infantry combat vehicles, future-ready combat vehicles and battle tanks. It is here that the K9 Vajra-T programme was executed, 100 K9s delivered, as per a ₹4,500 crore defence contract, to the Army ahead of schedule.

“In fact, for K9, we took Industry 4.0 and automation to a level where the first hull we produced typically took 100 hours of resources in terms of time or manpower hours. By the time we reached about the 20th, we had come down to close to 1/3rd [time taken],” says Patil. By the time they had crossed about 40 hulls, it had come down to 20 percent, and the tank programme was finished and delivered ahead of schedule.

These processes require a lot of research, development, time and effort at the design stage but they pay off amply on the shop floor. It is, says Patil, like the well-known story of the tree-cutter. “You sharpen your axe so much that you spend half the time and effort in sharpening the axe, but you cut the tree faster.”
******

L&T’s defence arm forms a small portion of the group in terms of revenue and order book. But the percentage is possibly set to grow, with its Industry 4.0, investments into technology, and government policy changes boosting Make in India.

The government, in the Budget this year, earmarked 68 percent of capital procurement allocation for the domestic industry. “If we look at L&T defence revenues, we used to be a few thousand crores over the last four-five years. Some of this came from the government, the rest from PSUs and DRDO,” he recalls. Today, this is changing to direct revenues from Ministry of Defence contracts. “The PSU portion was large, DRDO was another large segment, and what was the smallest [government contracts] will now be the largest.”

Its Industry 4.0 practices perhaps give L&T defence an edge. According to market intelligence and advisory firm Mordor Intelligence, for defence, aviation and space manufacturing, it is important to have complete ecosystems to support Industry 4.0. This requires planning and investment in technologies over and above simple cloud automation and moving to digital platforms for basic operations. “L&T India is one of the leaders in Industry 4.0 adoption, having adopted Industry 4.0 across its 13 engineering and manufacturing plants in India. This adoption includes IIOT-enabled remote welding stations, in-facility logistics management, internet-enabled facilities, data-driven decision making, forging, fabrications and equipment manufacturing.”

Currently, in addition to howitzers, at the Armoured Systems Complex, L&T is also indigenously developing 1500hp transmission for main battle tanks, manufacturing and delivering Sarvatra bridging systems, Akash Air Force Missile Launchers and Pinaka launchers for the defence forces. They are also one of the key suppliers of rocket motors, and solid and booster stages of PSLV rockets. According to analysts, the current aim of the Indian Space Research Organisation to produce and launch as many as three to four rockets per year will be a key factor for L&T in the next five years.

When it comes to armoured vehicles, companies like Tata and Mahindra are more dominant, but L&T’s capabilities and future procurement plans for the Navy puts it in a good position to land major supply, design and building contracts for ships and submarines in partnership with other firms, both domestic and international.

L&T and Mazagon Dock Limited have been selected as strategic partners for the Navy for the realisation of the Project-75 India programme. “L&T’s experience in ship and submarine building will be the leading factor for the company’s growth as India plans to procure numerous modern ships and submarines for the Navy, with tenders for the same expected to launch between 2022 and 2024,” points out Mordor Intelligence.

Considering the growth potential, are there any plans for expansion of manufacturing facilities and capabilities on the horizon? Patil shakes his head and laughs. “We have already invested close to ₹8,000 crore in our defence business.”