It continues to widen the gap with its rivals in India thanks to its robust online presence, product innovations and upgrades, and winning the trust of customers 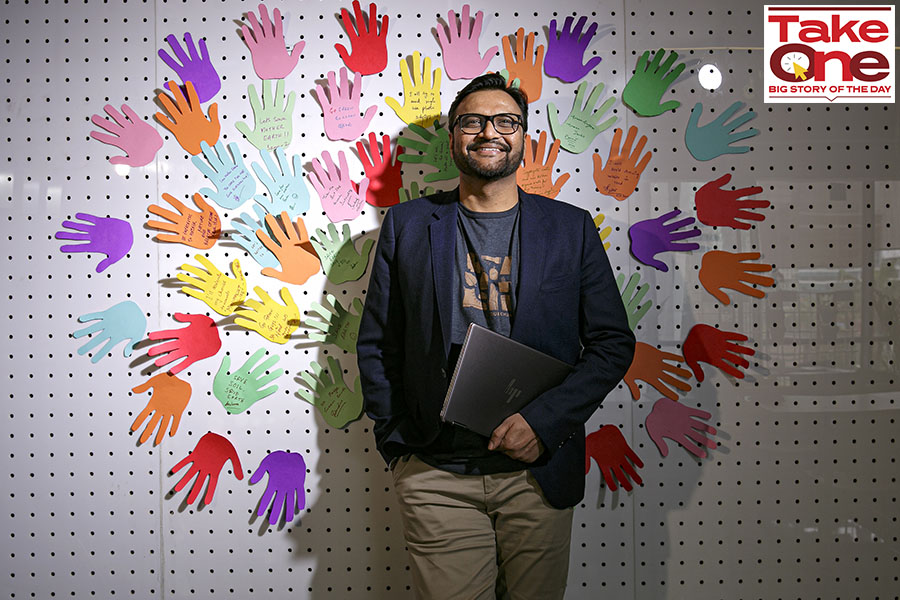 It was a different era till 2019. The contrast, though, gets most glaring in the computing world. The outsiders label the period as BC—Before Covid—which was typically characterised as an excessively sedate period of growth where ‘old desktops’ struggled in ICUs, and ‘young laptops’ crawled like infants. Ketan Patel tells us what was right, and not-so-right, in the PC (personal computer) world till 2019. He begins with the plusses. “HP has always been a credible brand,” contends the managing director of HP India. The brand, he underlines, had a huge credibility, vast presence and great performance. As far as the overall market was concerned, PC happened to be a stable business, India was looked upon as a promising country, and the American brand, which entered India in 1990, occupied pole position till 2018. “The journey was still credible, not incredible,” says Patel.

On the global front, though, something incredible happened in 2013. Chinese rival Lenovo toppled computing giant Hewlett-Packard (HP) to take the global crown. Six years later, in 2019, the dynamics in India reflected the global reality: HP ceded the top billing to Lenovo, which managed to grab 32 percent market share. HP came second with 26.5 percent, followed by Dell at a distant 19.8 percent. Interestingly, a loss in market share happened at a time when the overall market was stagnating. Desktops were becoming a thing of the past, and laptops were yet to become a necessity. This was the not-so-great reality about the Indian market, underlines Patel. The culprit to a large extent was mobile. Unlike most of the countries, where PC became the first device of internet, in India, smartphones played the lead role.

Cut to March 2020. Offices shuttered, schools shut down, supply chain got disrupted and life started revolving around PCs. The BC era was forced to make a sudden transition to a PC (post-covid) world where having a laptop became a must to ensure that one had roti, kapda and makaan. HP made the most of the pandemic tailwinds. To meet a sudden spike in demand and bypass the infrastructure gaps, charter planes full of PCs were flown to the master warehouse in Chennai, from where distribution across the country was undertaken. “We went all out to ensure that life for consumers, retailers and enterprise users didn’t get disrupted,” says Patel.

Airlifting of PCs was not the only heavy lifting done by HP, though. Two months into the pandemic, the computing biggie rolled out over 100 vans across the top 17 cities. The vehicles, Patel shares, were loaded with computing diagnostic equipment, had technicians wearing PPE kits, and the idea was to be accessible to address the repair and servicing needs of the PC users. The company aggressively beefed up its online presence. And lastly, it was nimble enough to roll out a bunch of product innovations and upgrades to the new needs of the users: Quality of camera went up by several notches, additional software was loaded to ensure that the machine worked round-the-clock, eye-safe screen monitors took care of the long visual hours, and audio software was ramped up to kill the surrounding noise. On the business front, a lot of financing options were rolled out for SMEs. The brand also started diversifying from products to a service company by rolling out workplace solutions for a hybrid world. “We used consumer insights to make life better for them,” says Patel, who joined HP in 2005. 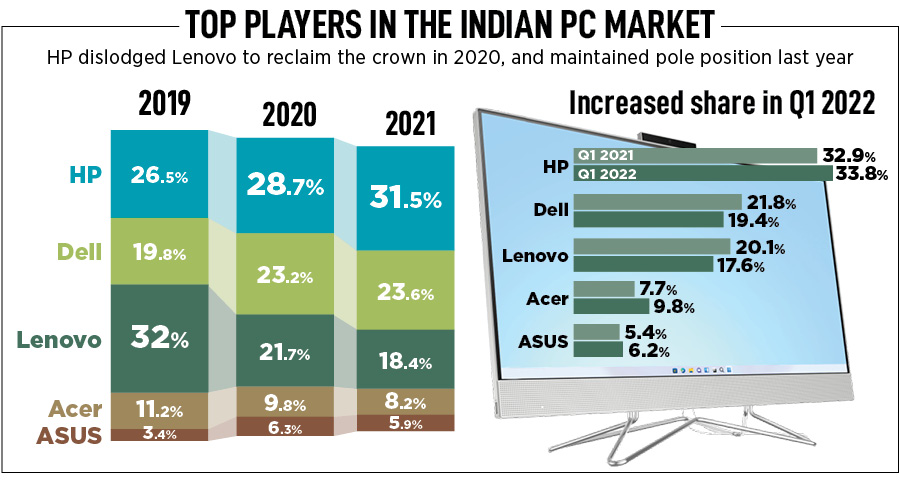 There were two ‘incredible’ things, though, that happened simultaneously. Binge watching on mobiles gave way to big screen TVs and, yes, laptops. And demand for gaming PCs skyrocketed. Look at the numbers. In 2018, HP sold 24,978 gaming notebooks from offline channels. The next year, the numbers increased to 45,340. Then came the pandemic. In 2020, HP sold 79,780 units, and the numbers leapfrogged to 1.04 lakh in 2021. For a company which had an estimated under 10 percent of sales coming from online channels till 2019, the numbers grew more than 3x over the next two years, touched a peak of 35 percent and have now settled to around 30 percent. Along with the online uptick, what also expanded was the retail footprint. From 450 exclusive retail stores in 2019, the numbers increased to 600 in 2021. In the first six months of this year, it crossed the 700 mark.

The efforts seems to have paid off. HP toppled Lenovo to reclaim the PC crown in 2020 by grabbing a 28.7 percent market share. Lenovo, which had 21.7 percent in 2020, slipped to the third slot the next year. HP, meanwhile, widened the gap with the second player Dell. Patel, though, reckons that what helped HP reclaim the crown and grow its clout is not only what it did over the last two years. “The brand was always credible,” he says. Staying with the consumers during the hard times, he underlines, made it incredible. “We sold products, but consumers bought trust,” he says, adding that this made a world of difference. Having products that suited all kinds of pockets was also an added edge over rivals. “We had something for everybody, whatever the budget was,” he says. 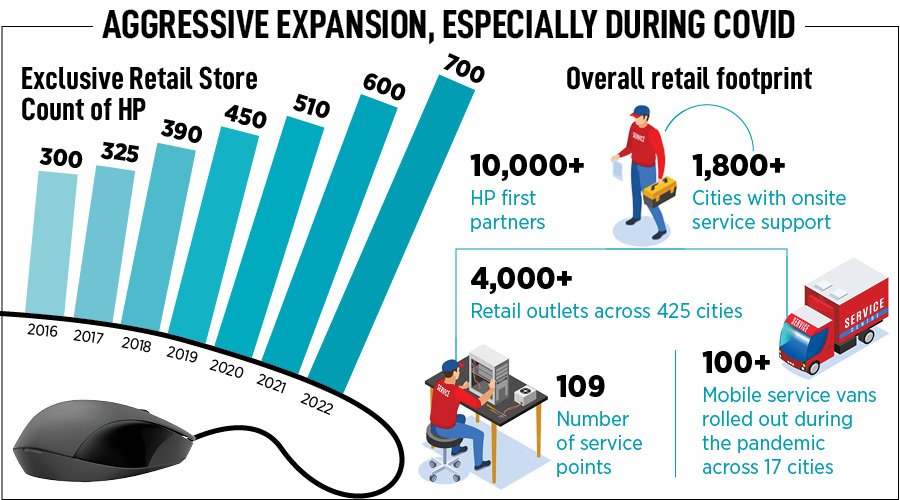 Industry watchers reckon that HP’s strong presence in all the three categories of PCs—desktops, notebooks and workstations—helped it grow at a faster clip than its rivals. The ability to manage supply well both in the consumer and enterprise segments gave it hefty business during the pandemic years, says Bharath Shenoy, principal analyst (personal computing) at IDC India. Even during the first quarter of 2022, the brand has managed to grow. It shipped over 1.4 million units and continued to lead the overall PC market with a share of 33.8 percent. In fact, HP had its biggest ever consumer quarter in January-March this year as it shipped close to 6.5 lakh units with a share of 33.2 percent. It also had a strong commercial quarter with a share of 34.3 percent. “Strong demand for commercial desktops, a clearance of big backlog orders, and continued demand for its consumer notebooks helped HP clock its biggest quarter ever,” says Shenoy.

Having a strong retail presence and brand stores also helped immensely. Premium devices, which includes gaming laptops, get more traction in offline stores as buyers prefer to touch and feel the device before buying, says Shenoy. Brand stores provided more assurance to the end-users, and staying proactive during the pandemic and aggressively providing consumer support helped it win consumer confidence. 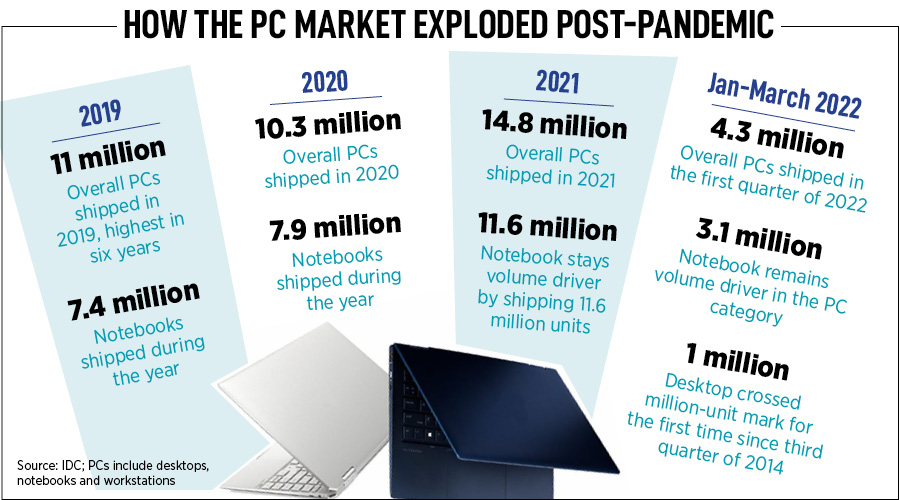 A flurry of global acquisitions also helped the brand to expand its play and reach. In March, HP bought Poly, a leading global provider of workplace collaboration solutions. Poly, the global computing biggie underlined in its media release, will help drive the growth and scale of HP’s peripherals and workforce solutions businesses. Peripherals represent a $110-billion opportunity, is growing by 9 percent annually and are driven by the need for more immersive experiences. Workforce solutions, meanwhile, represent a $120-billion opportunity and are growing at 8 percent annually. As companies invest in digital services to set up, manage and secure more distributed IT ecosystems, Poly’s devices, software and services, combined with HP’s strengths across compute, device management and security would make the company a formidable player in the hybrid solutions’ world, point out industry experts. Another buyout in June 2021—
Hyper X, the gaming division of Kingston Technology—would help HP drive growth in personal systems business, where gaming and peripherals are attractive segments.

Back in India, marketing and branding experts reckon that HP’s hyper obsession with customers helped it immensely. From rolling out servicing vans to introducing new features in the products to expanding the retail footprint, the brand stayed with consumers. “It is like Maruti, a trusted brand not only for quality product, but for customer after-sales and service,” says Ashita Aggarwal, marketing professor at SP Jain Institute of Management and Research. During the pandemic, most of the laptop players just wanted to sell. HP, on the other hand, was bundling products with trust. “It did magic,” she adds.

But with a waning pandemic and the offline world—schools, colleges and offices—springing back to life, will HP be able to maintain its dream run? Patel stays optimistic. “Though the growth won’t be as heady as over the last year, it won’t go back to the levels before pandemic,” he smiles. The headroom for growth, he underlines, is still massive. As people upgrade their smartphones and move to laptops, the future is promising. And then there are millions who still don’t have laptops. “As the purchasing power increase, sales would follow the path,” he says. Another short-term challenge, though, might be rising inflation.

Patel, for his part, reckons that the journey from credible to incredible would not be a short one. “We are just getting started,” he says.

Tweets by @forbesindia
Photo of the day: On the winning path
Gen Z vs Millennials: Here's what young people expect from the media