Lenovo gets an upgrade 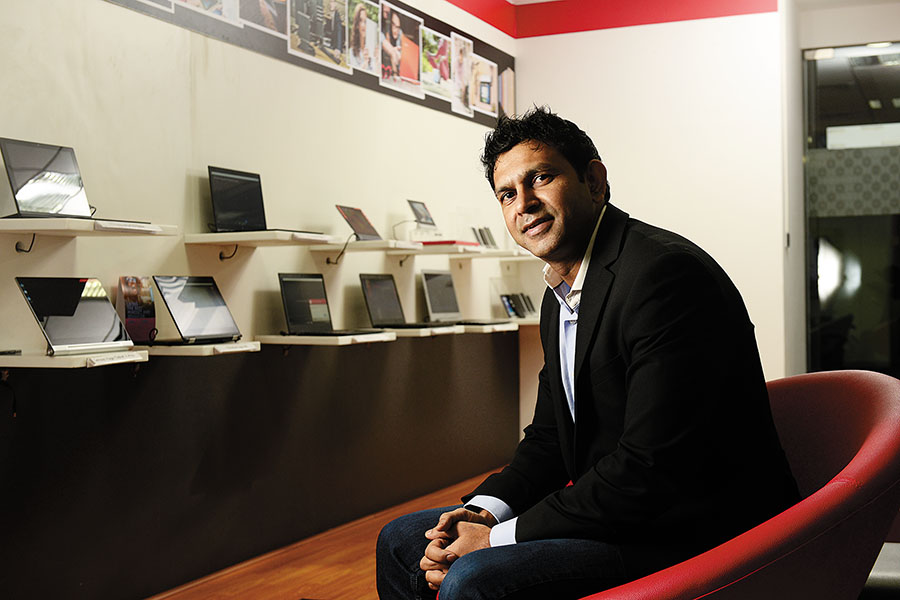 Image: Nilotpal Baruh
Rahul Agarwal, managing director and CEO of the Indian arm of the world’s biggest personal computer (PC) maker, Lenovo, starts his day at his Bengaluru headquarters by looking up the latest sales presentation on his ThinkPad laptop. The 46-year-old’s Lenovo tablet is perched on his workstation, which also has a smart clock, a smart camera and a smart bulb. At his fingertips is a Moto Z2 Force mobile phone.

As he gets ready to talk about his new tech babies, he starts with Smart Display, launched last December. With the Google Assistant, it lets users control over 5,000 smart home devices, answer video calls, monitor the kids’ room or check who’s at the front door through a smart camera. “All this stuff without lifting a finger,” he smiles. With Smart Bulb, Agarwal says, users can control its colour, temperature and brightness with their voice, while the Smart camera offers high-resolution images with a wide field of view for better visibility. “With infrared night vision at a distance of up to 20 mt, users can even see inside their homes,” he adds.

Welcome to Lenovo 3.0. “We want to be seen as a futuristic technology brand, not as a laptop or phone brand,” says Agarwal, adding that as a leader in the Indian PC and tablet market, Lenovo is uniquely positioned to lead the growth of the smart device market by introducing new-age devices and Internet of Things products. Adding momentum to this mission is a strategic partnership with Google. “Our smart device portfolio is in line with our vision of bringing smarter technology to all,” he adds.

Tech analysts view the latest avatar of Lenovo as a natural progression, with digital transformation changing the lifestyle of consumers and influencing the way services and products are consumed. Jaipal Singh, lead analyst at IDC India for PC, smart homes and wearables, says the adoption of new technologies is bringing business and cultural transformations, and is nudging businesses to include technologies.

Another shift taking place in the computer business is the plateauing of PC sales, which is putting pressure on vendors. In 2019, India posted an 18.1 percent year-on-year growth in the PC business, including desktops, notebooks, and workstations, and shipped 11 million units. But the growth was largely driven by government-driven education projects and upgrade purchases for Windows 10, especially in the business-to-business (B2B) sectors. 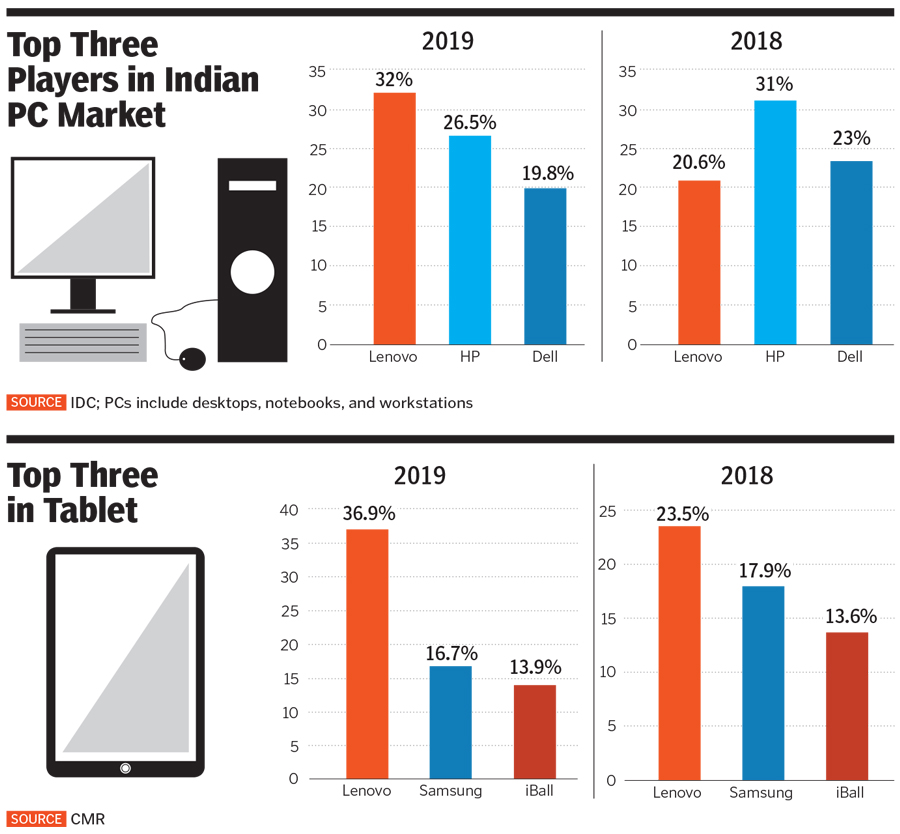 New demand, Singh explains, is coming from companies that are either scaling up or are formed in the internet age; these companies are looking for affordable solutions that are optimised for their businesses. All these factors are forcing PC vendors, including Lenovo, to customise their offerings to the new demand, and introduce new device and solution categories.

Agarwal recalls the first two versions of Lenovo. 1.0 was to make a success of its PC business and it started in 2005 with the acquisition of IBM’s PC business. “There was no precedent of an Asian company buying a global organisation. So, it was a big risk,” he says.

The task was not easy. The buyout expanded global reach and share, but also brought in its wake the task of building a common culture and establishing strong credibility with customers. Though the move paid off, the business hit a rough patch in 2008. “You always go down before you go up,” says Agarwal, explaining how the company managed to survive the global economic crisis. The world, he says, discovered a different kind of Asian company, which was getting better and better. 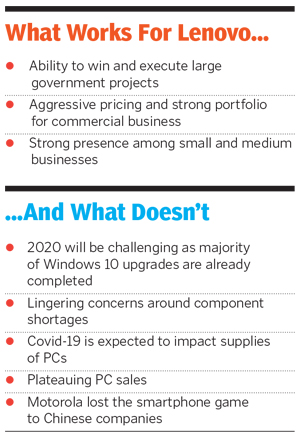 Lenovo 2.0 was about diversifying the product lineup—from PC to laptops, tablets, data servers, and mobile phones. In 2014, Lenovo bought Motorola from Google for a little under $3 billion. “It was a pretty bold move,” Agarwal says. The gambit seems to have paid off, at least globally. “We have achieved six straight quarters of profitability and five consecutive quarters of positive pre-tax income,” says Prashanth Mani, country head of Lenovo Mobile Business Group and managing director of Motorola Mobility India. Though Mani declines to give Motorola’s market share in India, he is betting big on the brand staging a comeback in the country where it used to be among the top five smartphone players before the entry of much more aggressive and nimble Chinese brands such as Oppo, Vivo, OnePlus and Realme.

What is reassuring is the strong legacy of Motorola in India. “It is still a loved and widely accepted brand in India,” says Mani, adding that the brand is exploring new product categories, starting with Smart TV, which was rolled out last September.  “Lenovo 3.0 is all about smarter and intelligent transformation,” he says. “B2B is where there is more money and massive opportunity.” Take, for instance, the November launch of ThinkBook laptop, which is especially designed for small and medium businesses (SMB).

Commenting on Lenovo’s SMB and B2B play, Singh says what has worked well for the company is its ability to win and execute large government projects. This has come on the back of aggressive pricing and a strong portfolio in commercial businesses. In 2019, Lenovo was the fastest-growing large PC vendor in the SMB segment with 25 percent annual growth, and the only company to maintain double-digit growth for two consecutive years, he adds.

The challenge for Lenovo, though, is multi-fold. While the immediate one is to ensure that its supply chain remains steady in the face of the Covid-19 pandemic, the bigger and longer term challenge is to ensure it gets its mobile business back on track in India.

The aspirational positioning of Motorola is a difficult task for two reasons, explains N Chandramouli, CEO of TRA Research: One, while the brand still has some positive perceptions among Indians, once consumers change phones, their perception of the current phone invariably exceeds that of earlier ones; the second concern is that if Motorola is unable to live up to its aspirational positioning, it will not be able to settle for any other position in subsequent attempts.

For Agarwal, the bigger challenges include not repeat old mistakes, like under-investing in ThinkPad and, overall, in Lenovo. “Our investments could have been better,” he says. Another challenge is to keep the focus intact. “We’ve been growing market share, and we’ve been quite profitable,” he says. Lenovo India reportedly closed last fiscal with revenues of ₹7,181 crore, and a profit of ₹179 crore. “It’s a journey. And we have just started.”

Tweets by @forbes_india
India, Day 1: How the world's largest coronavirus lockdown could impact the economy
Can you become immune to the Coronavirus?