Gulden speaks to Forbes India on why India is an important market for Puma, but staying number one is not the ultimate goal 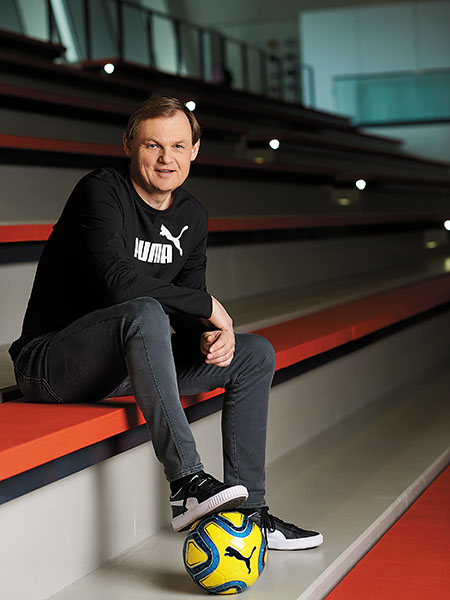 When Bjorn Gulden joined Puma as CEO in 2013, his vision was to make the German sportswear maker the ‘fastest sports brand’ in the world. Seven years on, the company has taken a huge leap in India by overtaking arch-rival Adidas for the second consecutive year. Success in India, says Gulden, is not a headquarter thing. “It’s a local thing.” Edited excerpts from an exclusive telephonic interview:

Q. You attribute Puma’s success in India to your local team. What makes it so special?
In many markets today, local relevance is more important than what people have seen. The consumer, distribution and marketing have put us in a position where we have made fewer mistakes. We have the resources where the mouth is. Puma is a brand that is historically strong, has an international flair and a good product engine. But the knowledge on how to be successful in a market like India is not a headquarter thing. It’s a local thing. The combination of having (Puma India Managing Director) Abhishek (Ganguly) and his team, with resources from us, and taking a lot of local decisions are reasons for the success.

Q. Were you not tempted to have an expat to head India?
I don’t care if a person is an expat or a local because you just need the right person. The probability that the local will be better than an expat is pretty high because if you are born in India, have lived in India and know India, you will be a better manager than if you are in a region like I am in and moving to India. For me, local knowledge is mostly connected with having local management. I’m not a big fan of having expats running big markets. I believe knowledge is more difficult to get for an expat than it is for a local.

Q. Where does India stand in your global scheme of things?
Well, India is climbing fast up the ladder. It’s a market that we believe has a great future. In the last two to three years, the combination of the brand’s global strength and good local execution has accelerated momentum. And with your population and development, it should be one of the top three markets in the future. But there’s still a long way to get there. Right now, it’s among the top 10.

Q. Has the ranking improved over the last two years?
We don’t look at India that way. India has gone through a change in distribution where the mono-branded online stores, either being owned and operated or being some kind of franchise, have been leading the way. Most of the world is still with multi-branded distribution. The only two markets that are mono-branded are China and India. We were early doing mono-branded stores. We were very early doing ecommerce. But it took a while to do it right. What you’re seeing over the last two years is that we are executing this distribution better, and that’s why there is growth in the top line and bottom line.

Q. How do you see the play between top line and bottom line?
First of all, it’s important that you are allowed to think long term, and you don’t try to run the business from a quarter-to-quarter or year-to-year basis. Globally, we should grow in double digits every year. And then we should capitalise that growth with some improvements on the bottom line every year. That’s what we’re doing. It’s impossible to grow your bottom line if you don’t grow your top line. At the same time, you can buy growth on your top line, but you can’t actually dilute your bottom line. That’s why the answer is you have to do both right. You cannot focus only on one of them.

Q. How does it feel to have India as the only country where you are ahead of your global rivals Adidas and Nike?
You can look at it in two ways. It shows you that with a good combination of what you do as a brand and with a strong local team, you can be number one. It’s a confirmation that we’re sitting on a great brand. On the other hand, it also tells us that we have not done a great job in the last 15 years because we are number one only in one market. I look at it the positive way and say that we are number one in a country with the second biggest population in the world.

Q. What are the potential challenges for the brand in India?
If you need to be successful, you need to create brand heat, which means you need to create an interest in your brand. And you have to do that both globally with global stars and a global presence, and the ones with local relevance. In India, a great example is what we have done with Virat (Kohli). He is one of the best examples of how you can take something that is local—cricket is a sport that is very, very big in India—but also irrelevant in most of Europe and the US. And then you have a personality like Virat, who is relevant for the Indian consumer… putting resources behind him is a good investment. The challenge is always the same: How do you keep brand heat in the local market? How do you make sure your pipeline of products, both from a performance and fashion point of view, is relevant? There are many local challenges too. But there are more opportunities than challenges.

Q. Your signing of Virat Kohli was a coup…
Again, this is a local thing. The management in India came up with a proposal and we supported it. It’s back again to finding out how relevant Virat was to India, and what we could do with him. You need to be close to him to understand that and that credit goes fully to Abhishek and the local team. It’s what we talked about in the beginning: Find out what is relevant for the end consumer. And, for this, you have to be there.

Q. Do you play cricket or are you a soccer fan?
No, I don’t play cricket, but I do have a cricket bat in my office. I know how it looks. I even know that it is made from English wood in India. I used to be a professional soccer player. With soccer, you play 90 minutes, and you normally have a winner. But in cricket, you can play for five days and it can end in a draw.

Q. But you knew about Virat?
Yeah, yeah! But that’s because I follow sports on a very wide basis and I am a sports maniac. But I would not have known enough to come up with that idea myself.

Q. Kabaddi seems to be the next big sport in India. Would you be keen to support it?
If the local team wants to and it makes sense, why not? There are certain global sports today that we will have enough competence to do from a global level. Soccer is one of them. Basketball is probably a second one, track and field is another. But locally, there are always things that are more important than the global thing. So, the decision on what would be the next mover in India is a local decision, not a global one.

Q. Globally, women are driving sales of sportswear. What has been the trend in India?
Well, historically, it been a male-oriented industry. It didn’t take the female consumer seriously. Puma, in the ’90s and the beginning of the 2000s, was popular among women and we had a lot of partnerships, both from the sports side as well as design and entertainment. When I came on board, and did an analysis, it was obvious we needed to put more focus on the female consumer again. And we did. We designed with Rihanna, followed up with Selena Gomez, and continued with Cara Delevingne and others. Also in India, the local team has targeted the Indian female consumer, especially on the fitness-training-yoga side. And that got picked up, especially via ecommerce. That’s why they showed a lot of the growth with the female consumer and it’s such a clear strategy for us to put her in focus in everything we do.

Q. Do you ever fear losing the No. 1 position in India?

The goal is not necessarily always to be number one. It is to please the consumer. And if we do that by being a brand that creates brand heat, the consumer gets interested… then we fill the pipeline with the right product and it’s enough to take you to be number one. If you please enough consumers, it will make you number one. But staying number one is not the goal per se, at least not for me. From a global point of view, what’s important is to grow more than the market, take market share, and give some of that growth to the bottom line so that we please our shareholders. In the end, there’s only one goal, which is to please the consumer.

Tweets by @forbes_india
Inside Puma's sprint past Adidas in India
As India's Economy Sags, Even the Trump Brand Is Struggling