How Indians are spinning the happily ever after

Through the Indian imprint of the Mills & Boon love factory, doctors, journalists and stay-at-homes are discovering—and showcasing—their talent for romantic writing 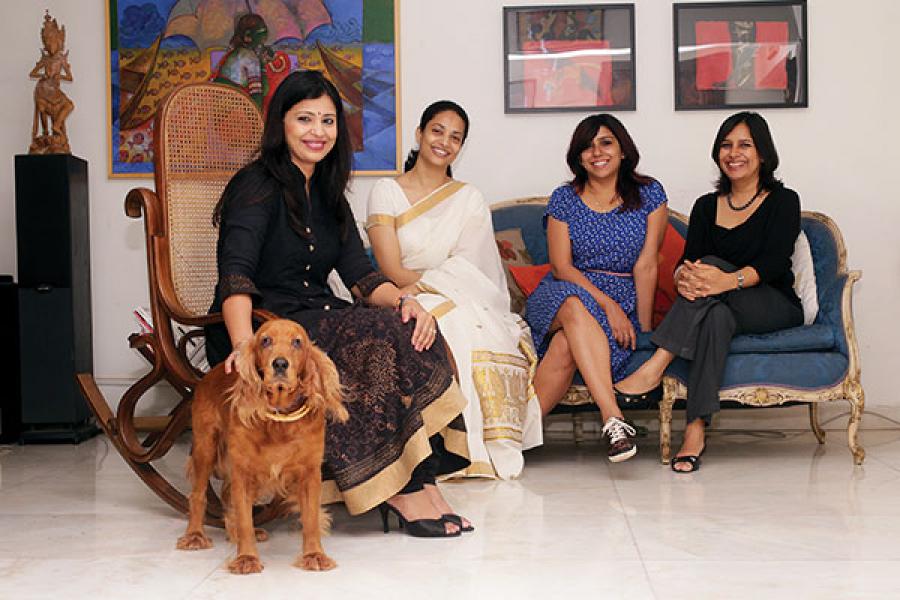 Reet Singh should have no time for romance. an eye surgeon based in New Delhi, she spends the better part of her day attending to patients and penning write-ups for grim medical journals. Once home, she’s a mother to her two sons. Yet, before turning in for the night, she unfailingly travels to her alternate, make-belief world where characters such as Mita and Tanay, the protagonists of her maiden book, Scorched by His Fire, fall hopelessly in love and live happily ever after.  And her day ends on a softer note than what real life decrees. “As a doctor, you can’t take your troubles to bed. You need something  that lifts your mood; something light and funny,” she says.

Consider her own love story: She’s certain she heard the song ‘I Could Have Danced All Night’ playing in her head the moment she laid eyes on her husband, also a doctor. It suggests a fairy tale romance or, in her case, at least a Mills & Boon one. The 52-year-old is among the fresh breed of authors who have been signed on by publishing house Harlequin to pen romances for their Indian imprint of Mills & Boon (M&B) books. In principle, Indian M&Bs have been around for a couple of years, but it is only in the last year that they have picked up steam. After the odd book here and there, Harlequin released nine titles in 2013, and will have another 11 out by the end of this year.

The most common source for scouting talent is the annual Mills & Boon Passions Contest. Now in its fifth year, the contest draws close to 300 entries from budding authors, not surprisingly all women, of which only three or four make the cut. The winners then shape their books over a six-month period of considerable hand-holding by Harlequin’s global editors.

The current crop of Indian M&B writers makes for an interesting cast of characters. From journalists, bankers and doctors whose lives are steeped in reality to stay-at-home mothers rediscovering their long-lost passion for writing—the line-up is varied and fascinating.

Some, like 39-year-old Shoma Narayanan, a marketing executive with HSBC Bank for the last 14 years, found that they have a knack for exploring urban love stories. When she entered the Passions contest three years ago, her submission caught the eye of Harlequin’s editors, and since then she’s published five M&B books. She’s preparing for the release of her sixth novel, An Offer She Can’t Refuse, which is expected to hit the stands by the end of the year.

The women at Narayanan’s workplace are some of her most loyal and supportive readers. And she suspects that her male colleagues have picked them up as well, even though they feign ignorance.

Narayanan is not afraid to tackle thorny issues that are tempered with the sweetness of romance and the guarantee of a happy ending. In Secrets & Saris, a jilted bride relocates to a small town in India only to catch the eye of a television celebrity. But can she get past the fact that he’s divorced and a single father?

Arranged marriages and rebels with a cause are popular motifs in Indian romance novels. In Bootie and the Beast, Falguni Kothari, 41, a US-based homemaker who was born and brought up in Mumbai, touches upon prejudices that are endemic to Indian society: When the press catches Indian supermodel Maya Mathur purchasing a baby bootie, her reputation is ruined, and she flees to Texas to reside with her “life-long friend and secret love, Krish Menon (aka the beast)”. And yes, Krish is a CEO. Some things don’t change in Mills & Boon’s world. 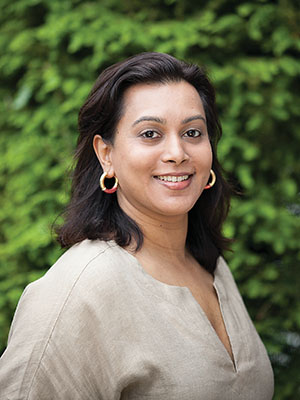 Bootie and the Beast was Kothari’s first stab at M&B romance. She decided to give writing a go after her mother goaded her to “do something worthwhile”, now that her kids were grown up. A short course on romance writing secrets, and she was ready.  She’s currently working on two manuscripts, but has yet to approach publishers.

A common thread running through all these new romance offerings is that the plots are inherently Indian. The conflicts that keep lovers apart run the gamut of desi prejudices—warring families, arranged marriages and even caste and community differences.

Narayanan, who is the only Indian M&B author whose books are published globally, says that her plots come as a culture shock for Harlequin editors abroad. “A question I get is, ‘Why would a guy still bother about what his mother thinks?’ In another book, they wondered why the girl was trying to conceal the fact she was in a physical relationship. They ask, ‘If she’s dating, then why is it a big deal if she’s staying over at his place?’”

Country head and publishing director of Harlequin India Amrita Chowdhury acknowledges the uniqueness of Indian M&Bs. “In a global story, the hero and heroine are very individualistic. The challenges and hesitations are all their own. In India, there will be aunts, uncles, cousins, grandmothers, and so on. In the first few books, the global editors would wonder why these alpha heroes still live with their mothers,” she says.

Chowdhury, who spearheads this tribe of Indian romance writers, is an unlikely suspect for this role: Her résumé includes an engineering degree from IIT Kanpur, a Master’s from UC Berkeley and an MBA from Carnegie Mellon’s Tepper School of Business. Compare that to her current role of commissioning mushy, escapist romance novellas and her choice baffles many. “When I was in B-school we could not admit that we read Vogue or Marie Claire. It was meant for silly girls. If you’re serious, you should read The Economist and Businessweek.”

It’s a bias Chowdhury encounters even today. Often, she meets with women who admit to consuming M&Bs but shy away from acknowledging it publicly. “These books are fun. You don’t have a friend to catch a movie with at night, so read a book. It’s not aspiring to be literature. It is meant to be a good read, a mood lifter. A lot of my authors are highly educated and successful in their careers,” she says.

Many first-timers are initially hesitant to write under their own names. For instance, Narayanan says she had briefly considered adopting a pseudonym. Then, there is Gwalior-based Tanu Jain, the author of His Captive Indian Princess and His Runaway Royal Bride, who has a Phd in English Literature and did her thesis on EM Forster’s short stories. But she nurtured a secret and “embarrassing” desire to research on the world of M&B romances. “I hid the fact that I was an aspiring writer of one of those steamy Mills & Boons books from friends and family for years. It was my childhood dream to see my name embossed on an M&B,” says Jain. She realised her dream in 2012, and is now writing her third romance novel, tentatively titled The Cursed Royals. In Jain’s fiction, Indian rajahs replace traditional M&B Greek tycoons and European billionaires. 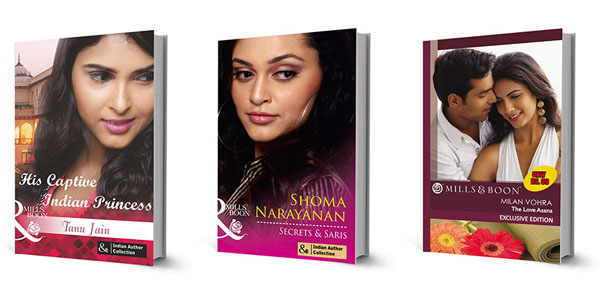 Every love story, irrespective of its geographical setting, follows a non-negotiable pattern: Man meets woman and they fall in love, only to be torn apart by conflict though they will reunite against all odds, get married and live happily ever after. The numerous genres the global M&B series explore within this restrictive framework can boggle the mind. Every book holds a promise of a certain degree of explicitness in the narrative. While the Blaze series—with their more suggestive covers—clearly point to steamy tales of seduction, the flirty, pink covers of the Cherish series cater to die-hard romantics. And Harlequin’s Spice imprint is the most risqué of the lot, with generous doses of erotica, casual sex and bondage.

While the Indian imprint is still at a nascent stage, the global series of M&B is a 106-year-old brand, currently published in 114 countries and 31 languages.

Jain, for instance, is comfortable penning physically intimate scenes, but she ensures that her mother and 16-year-old daughter are kept miles away from her books because of their steamy quotient. A reviewer once recommended that she tone down the vivid detailing of her love scenes. “Passion is intrinsic to my idea of love and I will continue my ‘racy and explicit’ writing as long as I feel comfortable about it,” she says. But she’s more the exception than the norm. Most new writers do not deviate from traditional Indian sexual mores and, more often than not, sex and physical intimacy is implied but never directly addressed.

Leena Varghese, a freelance illustrator and the author of A Perfect Mismatch, has set certain boundaries for her characters. “I’m 42 years old and probably a little old-fashioned. I have certain reservations about showing my characters going to bed on the first date. My romances are more about love, understanding and positivity,” says the Mumbai-based mother of two.

Singh, too, echoes a similar sentiment. “I don’t want to talk about [body] parts. I want emotion and feeling, and not about who’s touching what,” she says.

Chowdhury receives plenty of manuscripts where lovers hold hands, then feel guilty and pull back. After some hemming and hawing they resume holding hands, only to pull back yet again. “It can get annoying the third time round,” she says.

That said, authors are not pressured into writing love scenes they don’t feel comfortable with. “It may not be my favourite part to write, but if it is an M&B book and it is 2014, then what is the point of not having a sex scene?” says journalist Aastha Atray Banan, author of His Monsoon Bride. Physical intimacy, however, is just one facet of a love story. What women of all ages are drawn to is the romance itself, and the dream of a happily ever after. Romance doesn’t come with a sell-by date, it appears, and neither do these dream-weavers.