Battle among the clouds for SalesForce.com

How will SalesForce.com meet the ever-increasing competitive pressure in the cloud computing market they helped to create?

The vibrant world of enterprise software and cloud computing paradoxically generates larger-than-life executives in its own ranks through managing the business of corporations and monitoring client relationships. Consider Larry Ellison, the billionaire CEO of Oracle. It’s no accident that Marc Benioff worked for Ellison for 13 years before founding San Francisco-based SalesForce.com in 1999, a company based on the premise that business software–and maybe all software–was changing from a product to a service. Leaving Oracle was a risk for Benioff, but risk-taking is in keeping with his outsize, jovial personality which brought criticism the first time he stated software was dead. 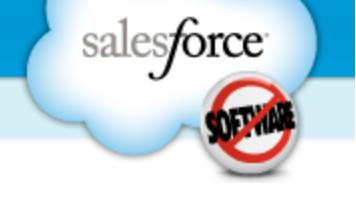 SalesForce.com continues to bolster its enterprise offerings to small and midsized businesses and recently started encouraging third parties to develop applications that run on their technology platform. The company’s revenues and net income have grown substantially each year since fiscal 2007.

SalesForce.com continues to make strategic decisions to strengthen its market position. As a part of a broader strategic move to extend its product, SalesForce.com tapped into past core CRM application space. A recent example is the introduction of Database.com – an Enterprise database built for the “Cloud.” At first it appears SalesForce.com is a competitive threat to Benioff’s former employer. He describes Database.com as a “hybrid of a relational database” and Oracle’s core database as a relational database. Hence industry experts are stating that SalesForce.com and Oracle are not competing head-on in this arena; but this could be a wakeup call for several incumbents – Microsoft already has database as a service and IBM and Oracle might be forced to offer it.

How would SalesForce.com sustain the Forces of a potential Cloud Collision?

SalesForce.com started as a service supporting small businesses without dedicating resources to target markets of specific size. At the time Benioff was concerned about investing too much into the small business market – the cost of collecting revenue itself was higher than the revenue generated.

Potential client attrition was another reason for concern. In spite of the risks, Benioff made the step to invest further in this market which he found to be progressive in its support of new technology. This translated into short sales cycles, low cost of sales and high closure rates. After this success, SalesForce.com made the strategic decision to segment the market into small and medium sized companies. Further, because of the mandate to serve small businesses the majority of their customers were Internet start-ups. These start-ups were committed to technology and rapid growth which resulted in higher demand for Saleforce.com’s product. In 2001 after the Dot.com crash, SalesForce.com experienced serious user attrition and was severely cash flow negative and facing potential bankruptcy. The subscription-based strategy helped to mitigate the attrition resulting from the Dot.com meltdown.

To raise capital, cash flow had to improve and an implementation of a new strategy was necessary. Collecting upfront service fees for a year or more and offering a discount as an incentive was beneficial from a revenue recognition perspective. To change buyer behavior towards commitment during the Dot.com meltdown, SalesForce.com initiated “restructuring” their business model by introducing long term subscription plans. Annual and multiannual contracts represented a dramatic shift for SalesForce.com and for the industry. This step had a significant impact on their growth and presently the model is adopted by prominent industry actors such as Google and Microsoft.

The product solutions were defined by SalesForce.com through satisfying the needs of the customers rather than driving a product roadmap. As new technology was evolving and companies were given a choice between a PC application or cloud computing, SalesForce.com had to ensure that potential customers would select the technology of the future.

It was necessary for SalesForce.com to eliminate the competing forces in the market and create new sources of value, resources and capabilities. The on-demand market place that packaged and distributed applications was introduced.

At that time Forbes magazine called SalesForce.coms’ new product AppExchange “iTunes of business software.” Like any marketplace, customers were offered an opportunity to find what they were looking for, try it and then talk about it with other like-minded people.

SalesForce.com did not charge royalties fees for purchasing AppExchange applications– it was primarily a value-add feature of the platform service and a tool to improve customer retention. With the additional applications provided by the SalesForce.com platform, customers were less likely to leave for a competitor. With AppExchange, SalesForce.com was perceived by the market and by the industry not only as a technology provider, but as an enabler of innovative technology. This changed the competitive landscape and established the foundation to develop an ecosystem of partnerships. SalesForce.com did not intend to cement its business strategy on a niche opportunity – opening and entering into partnerships was associated with capability and resource expansion. Even today after the introduction of Dataforce.com – based on Oracle’s relational database – the partnership with Oracle remains symbiotic and noncompetitive. A Fierce Rivalry
The open-distribution approach strengthens SalesForce.com strategic position as it builds upon its unique set of resources providing a better fit for each of its competencies. As rivals develop new service products and potential substitutes, the threats to this leadership position become significant.

The strong focus on R&D sharpens SalesForce.com’s competitive edge and its capability to expand its offerings.

SalesForce.com’s R&D expenses since 2008 represent a compound annual growth rate (CAGR) of 44%, which is significantly above the industry median. Also impressive is the CAGR of client acquisitions – 34% increase since 2007 due to the increased demand for cloud applications and standard service offerings. These results enhanced the company’s top line growth. Gross profit margins at 80.73% stand out compared to the market median of 28.77% and the industry median of 66.21%. This translates in revenue growth to $1.3B in 2010, an increase from $748M in 2008. (http://premium.hoovers.com.ezproxy.t-bird.edu/subscribe/co/fin/landscape.xhtml?ID=ffff2010) Considering the numerous activities and acquisitions SalesForce.com has experienced over the last year it is interesting to consider if there will be derivations in the strategic position of the company as well as changes in exposure to market forces or threats from competition.

Vs. Microsoft
Microsoft has grown to one of the world’s largest software providers by offering products that reside on computers globally. Microsoft embraced this cloud model of software distribution several years ago and has an interest disrupting SalesForce.com’s meteoric growth.

In its most recent campaign, “Don’t Get Forced,” Microsoft’s target is not thinly veiled. Where Oracle and SAP focus more on enterprise customers, Microsoft is going after the small-to-medium sized market, which is SalesForce.com’s key market space. A recent campaign launched promised a $200 rebate to any SalesForce.com customer that switched to Dynamics in an attempt to break the Salesforce.com value image. Microsoft went to the extreme of sponsoring a publicity stunt associated with the campaign by sending a fleet of Segway scooters to the annual SalesForce.com Dreamforce conference with signs mounted on the front reflecting the campaign: “I did not get forced.” This was more of a reaction to the value of SaleForce.com than a response that would successfully unseat their market presence.

Benioff surprisingly turned the tables on Microsoft when he invited the same actor from the Microsoft campaign (also a personal friend of Benioff’s) to join him on the keynote stage, where he “apologized” for anything SalesForce.com did to send away the fake customer in the first place and then ended by winning him back to the SalesForce.com platform. This elicited an ecstatic reaction from the SalesForce.com crowd that was present. Reactions from companies a powerful as Microsoft underscores the significant difficulty undermining an incumbent’s value proposition once it’s established in a market. Microsoft has the next move in this game of strategy and it will need to be well thought out if it will ever have any substance.

Leadership Vision
Behind the visionary and founder Benioff and his personality there is a company personality that nurtures the image and the brand of SalesForce.com. Benioff was asked in an interview once, “What did you learn from Larry Ellison?”

“You have to have a vision of the long view. When we make a big, grandiose statement like software is dead, or Microsoft is letting us down, that’s what we’re doing. “ (Benioff, M., 2009, Behind the Cloud, San Francisco: Jossey-Bass)

These are clearly only the first salvos in what will be an on-going battle to gain supremacy over the cloud computing market. Can the young, aggressive company with the new ideas stand one-to-one with the likes of Oracle, Microsoft and SAP with innovation alone? Or will the deep pockets and combined R&D strength of Microsoft prove that Benioff simply awakened a sleeping giant? The coming years will undoubtedly provide some distinct tension in the global field of software distribution and usage. Whether or not Benioff and Salesforce.com will be able to remain at the forefront as an industry pioneer and leader or whether they will be absorbed by the giants in the clouds: It will be an engaging development to see unfolding in the coming decade.