From #MeToo and Sabarimala to disability rights and safer workplaces, women are reclaiming their right to an equal society, a movement that gained traction in the past decade 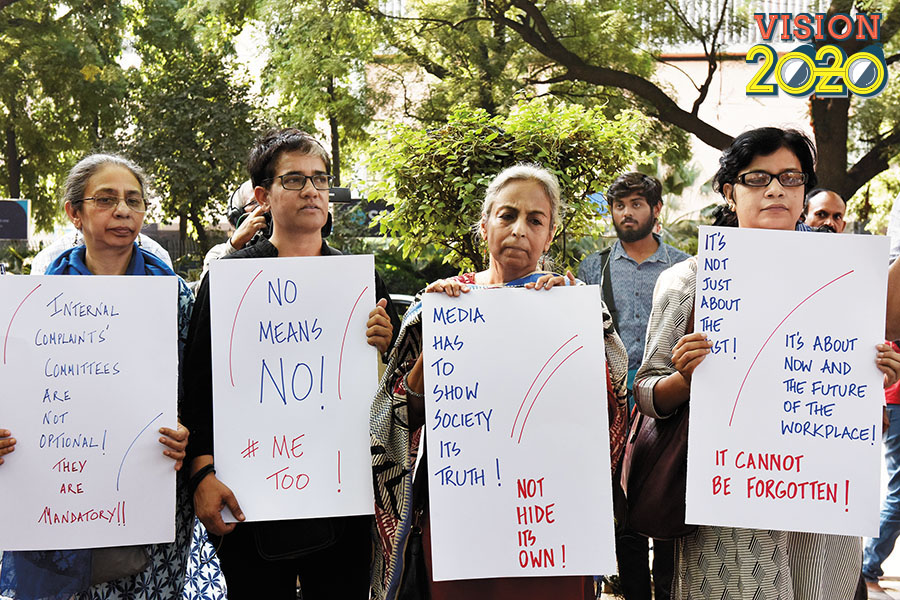 The #MeToo movement opened up conversation on sexual and other forms of harassment against women that were brushed under the carpet
Image: Mohd Zakir / Hindustan Times via Getty Images

Once in a while, something close to a bolt, a bolt of conscience, comes down upon us and moves us to protest and speak out. We would like to point out some such incidents in the context of gender inequality, atrocities and discrimination in the past decade, along with the struggles of the women’s movement, the positive changes and the challenges which face us. 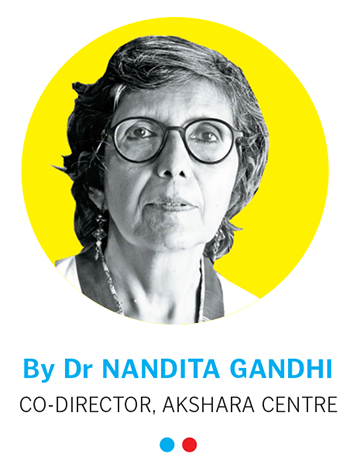 That there is violence against women in our society is known, tolerated as well as frowned upon. But what shook the old and young was the brutal sexual assault on Jyoti Singh Pandey on a Delhi bus in 2012 and the recent case in Telangana. There was public outrage and protests in most cities.
Sexual assault or rape is the fourth most common crime against women, which is increasing at a rate of about 26 percent every year, while the conviction rate is disappointingly dipping. The demands for hanging rapists are frustrated cries for justice. This was not quite the scene when the first protests against rape took place in 1982 with a handful of women standing outside the Bombay High Court asking for a review of the Mathura rape case.

Since then, the women’s movement has consistently worked at amending the antiquated rape laws and broadened its ambit to sex selection [amended in 2003] and domestic violence [2005]. The Verma Commission received 80,000 suggestions for amendments in the definition of rape and police procedures which introduced amendments to the Criminal Act in 2013. The change is that now it is a public concern. Unlike the past, women are refusing to hide behind silence and stigma. These are huge achievements, but there are pointers that convey that much needs to be done for prevention of violence against women by changing deep-rooted and misogynist social norms, and having better police and judicial systems.

Another jolt was the recent #MeToo revelations when a famous actor and later prominent newspaper editors and celebrities were named as sexual predators. For me, the first #MeToo accuser was the daring Rajasthani woman, Bhanwari Devi, whose case ushered in the 1997 Vishakha Guidelines and later the Sexual Harassment of Women at Workplace (Prevention, Prohibition and Redressal) Act, 2013. The latter has now made it mandatory to have sexual harassment grievance committees.

Controversial as it is, the #MeToo movement has travelled all over the world and garnered millions of signatures. Its achievement is highlighting the everyday sexism in the lives of women, which is so often glamorised by commercial films and heroes. Its challenge is that in spite of a favourable law, cases of stalking increased from 4,699 in 2014 to 8,145 in 2017 as per the data from the National Crime Records Bureau.

It gave me great pleasure to see the India-based documentary Period. End of Sentence, win the Best Documentary Short Film at the 2019 Oscars. Not only were women in a small Indian village making sanitary napkins and selling them, but they were also spreading the word on hygiene and against superstitions.

Not so long ago, menstruation was a that-which-could-not-be-named topic. Many women’s groups like Akshara working with women and girls could not ignore menstruation taboos and hygiene. I remember using hand-drawn crayoned diagrams and charts of the reproductive system in small interactive workshops to demystify menstruation taboos and superstitions. Support on this issue came from an unlikely quarter. Corporates discovered that from an estimated 355 million menstruating girls and women in India, only about 12 percent use sanitary napkins, after a 2011 survey by AC Nielsen.

The massive TV and print media advertising campaigns for using pads cleverly included exposing myths like the well-known ‘Touch the Pickle’ advertisement [by Procter & Gamble]. This dragged the topic into the public sphere. Recently, young people have taken up independent initiatives like #HappytoBleed and Pads against Sexism, and rephrased slogans on college walls, saying “Menstruation is natural, rape is not” and “Period blood is not impure, your thoughts are”.

Young women were more inclined to accept the naturalness of menstruation, but hesitated to enter temples when menstruating because of gender socialisation. So when refused entry into the Shani Temple and the Haji Ali mosque, they fought back. Many feminists who were not religious agreed with the right to worship and were against religious obscurantism. But the controversy around women’s entry into the Sabarimala temple in Kerala turned out to be different, with thousands of women linking hands to form a wall of solidarity for their constitutional rights, and there were others with placards, saying ‘Willing to Wait’. In spite of the politicisation of the issue, the court cases have kick-started a public conversation on the rights of women versus tradition.

In 2012, a wheelchair-bound disability rights activist was asked by a SpiceJet pilot to de-board as she would inconvenience passengers. There was no hesitation or time lost as she immediately filed a petition before the Supreme Court seeking compensation and changes in the Civil Aviation Requirement guidelines in India.

There has been a quantum leap in the visibilisation of the issues faced by physically challenged individuals in the past decade. We are now aware that from the 2.21 percent disabled people in the total population in India, about 44 percent are women and that they face discrimination and harassment that is different from men. The 2019 Human Rights Watch Report outlines the violence against women, especially the cases of rape on mentally challenged women. There is a long way to go to, and we need governmental schemes and more films like Margarita with a Straw that will help us go beyond sympathy to understand the complexity of the issues women with disability face.

Often, people ask, where is the women’s movement?  It does not have an address or organisation. It is in the hearts and minds and actions of women who do not wait for someone else or the government to do something, but take it upon themselves to struggle against their own discrimination. It is in the vision and belief and movement for an equal society. As Arundhati Roy said, “Another world is not only possible, she is on her way. On a quiet day, I can hear her breathing.”

Tweets by @forbesindia
On words: 'Disruption' and climate change? They are connected
'Rise above using gender as a selling point for CSR': Apsara Reddy