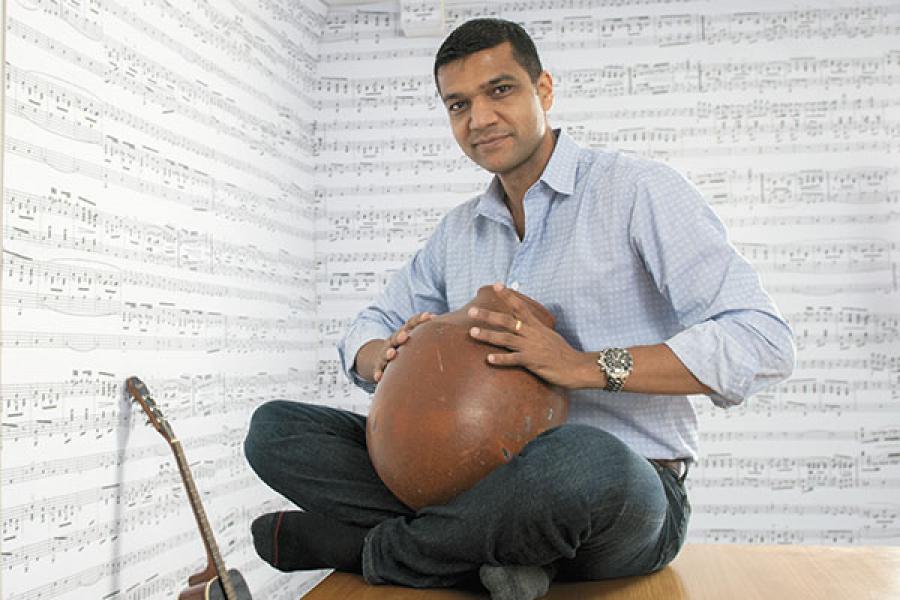 Image: Mexy Xavier
Bajaao CEO Suman Singh’s foray into ecommerce was from Austin, Texas, where his garage doubled up as his warehouse

With guitar music emanating from a quaint corner, ‘Mission 50’ cards—declaring a target to place 50 percent of all orders through phone calls by next year—hanging above every desk and high enthusiasm among its employees, the office of Bajaao, an ecommerce platform for retailing musical gear and instruments, in Andheri, Mumbai, is just a microphone and audience short of being a live music show.

The conductor of this symphony is Suman Singh, 38, who sits with a ghatam (a percussion instrument) aptly atop his desk. Since taking charge as CEO in January 2015, Singh has doubled Bajaao’s employee strength to 120, revamped its website’s interface and automated shipping and inventory. Currently, the company retails over 7,000 products across 500 brands. And, under Singh’s watch, Bajao has nearly quadrupled revenues to Rs 55 crore in FY16 from Rs 15 crore a year earlier. “We will be profitable this financial year,” he says.

Singh is no musician though. After completing his bachelor’s in engineering in 1999 in Mumbai, he pursued his master’s in computer engineering from the University of Texas before plunging into the corporate world. He kick-started his career with Nortel Networks and later joined Dell. “But I soon got tired of corporate life,” says Singh.

His first venture into ecommerce was in 2005, when he was based in Austin, Texas. Singh observed that though Austin is the live music capital of the world, it is an under-served market for amateurs who don’t know much about instruments. “Music stores in Austin are very elitist. If you walk into one and do not know much about an instrument, it gets kind of intimidating. My personal experience in these stores was horrible and I wanted to fix that,” says Singh.

With a $5,000 credit card loan and his own garage doubling up as a warehouse, he started Austin Bazaar, an ecommerce platform for selling musical instruments to beginners. The instruments were sourced locally, says Singh, and “within the first year, we made over a million dollars in sales and had to move out of the garage as it could not house all the instruments”. Today, Austin Bazaar—which Singh continues to helm alongside Bajaao—employs 40 people and rakes in around Rs 230 crore in revenue annually.

Around the same time that Singh started Austin Bazaar, Ashutosh Pande, a postgraduate in Ancient Indian Culture and member of rock band Xenon in Mumbai, observed that there was a shortage of instrument dealers in India. To address this gap, Pande, then 26, founded Bajaao in September 2005 with an initial capital of Rs 4 lakh.

Online transactions were still a novelty in India then. “People were hesitant to put their credit card details online, and we literally had to hand-hold people to make the purchase,” says Pande, who is now the board chairman and CTO of Bajaao. But the company slowly started gaining popularity, mostly in small towns that did not have many retailers.

In 2010, Bajaao was acquired by JMD Telefilms for around Rs 5 crore. The venture then diversified into providing consultancy services to studios for audio-video setups. Challenges, Pande admits, began when the likes of Snapdeal and Amazon entered the musical gear retail space in late 2012.

But help was just around the corner. On a visit to India in 2014, Singh was keen to understand the popularity of music in the country and was introduced to Pande by a mutual friend. “Bajaao, at that point, was facing a lot of challenges (in expanding geographically and scaling up sustainably) similar to what I once faced with Austin Bazaar. The company had to switch to a more sustainable model,” says Singh. At his behest, Pande visited Austin that year.

“He [Singh] was already running a company, which was ten times larger, in the US and I was impressed with the way he had streamlined business processes,” says Pande. The visit led to a partnership and Singh got involved in Bajaao as an investor, acquiring a majority stake from JMD Telefilms. (Currently, Singh and Pande jointly own three-fourths of the company, while JMD Telefilms owns the rest.)

In January 2015, Singh took over as the CEO after which Bajaao developed a unique strategy to grow its four verticals—Play, Experience, Learn and Discover (see box).

“Our focus has always been on selling high-end instruments,” says Pande, “and hence, most of our products are imported.” The average size of a transaction is Rs 10,000. But it “jumps to Rs 25,000 when potential buyers consult experts at our call centre before the purchase,” says Singh, which explains the ‘Mission 50’ cards in the company’s office. 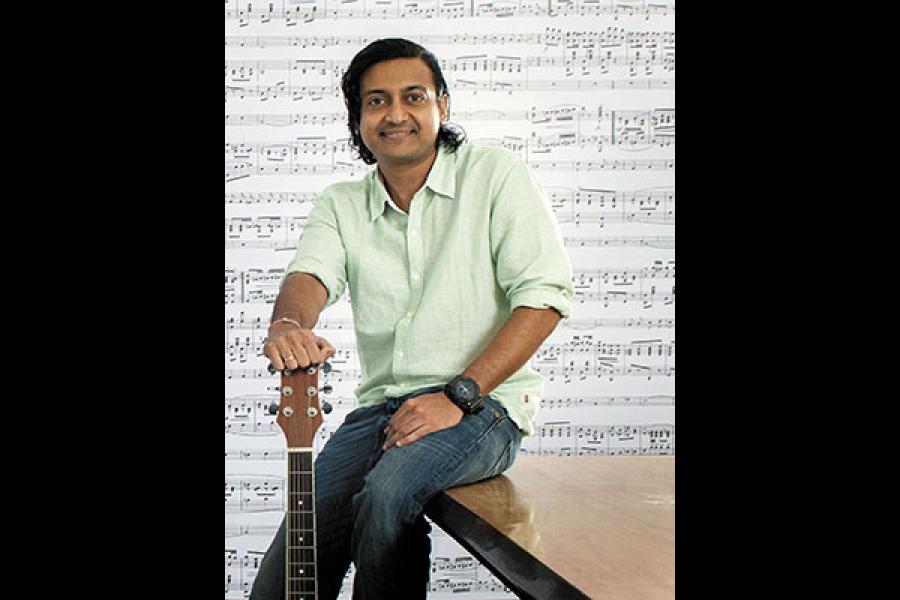 From their warehouse in Bhiwandi, in Mumbai’s central suburbs, the instruments are delivered within five days in most cases. A tie-up with India Post has given the company a pan-India presence.

Logistics and reverse logistics (in case of returns) are the most important aspects of the Play vertical, according to Singh. To fortify this, he is looking to increase staff strength by 50 percent in the next six months.

But are consumers ready to buy musical instruments online? Says Karthik Janakiram, lead guitarist of the Kolhapur-based band Aakar, who bought his first guitar from Bajaao in 2010: “Online sites are useful only for beginners who are not bothered with the intricacies of the instrument like the fret board being maple or rosewood and whether one prefers the brightness of a Fender Stratocaster or the warmth of a Gibson Les Paul [both models of electric guitars].”

These limitations of online retail could be a concern for Bajaao. Along with ecommerce portals for musical instruments like theinventory.in, Bajaao also faces stiff competition from the grey market, retail stores like Furtados and Raj Musical, and marketplaces like Snapdeal and Amazon. But Singh is clear that Bajaao will not foray into retail. “We have already overtaken Furtados in terms of revenues,” he claims.

“In electronics, the ticket size is high and people seek discounts. Retail costs and distribution margins make the products expensive. Also, most people know what they want through research and their music teachers. So I am not surprised that Bajaao is selling more than Furtados,” says Harminder Sahni, founder and managing director of consulting firm Wazir Advisors.

Singh adds that he doesn’t mind buyers doing their research at Bajaao before buying their instruments elsewhere. “We want them to be a part of the experience,” he says and that is where the next vertical comes into the picture. “Our aim with the Experience vertical is to promote live music and get more artists,” explains Singh. Bajaao is credited with the success of music festivals like the metal festival ‘Big SixNine’, the jazz-themed ‘Naariyal Pani’ and the recent dance festival, ‘Bailamos’.

They also arrange artists for various gigs, the most notable being the Tuesdays and Thursdays at Hard Rock Cafe in Mumbai, where Bajaao curates and manages the music for a fee. The company has also worked with brands like Walt Disney Studio, Sony Music and Pepsi MTV Indies. It has also signed a deal with the National Institute of Technology, Rourkela, to help the students learn and experience music. “We are expecting a 10x growth in revenues from the Experience vertical,” Singh says.

For Discover, Singh plans to launch an app which will enable people with similar tastes in music to meet.And as part of the Learn vertical, the company has launched its own line of instruments called ‘vault’, where the instruments are directly sourced from manufacturers and thus priced much lower. “This is targeted at students,” says Singh. Bajaao, for instance, is the official musical equipment supply partner for True School of Music, a Mumbai-based music academy.

Baqar Naqvi, a business director at Wazir Advisors, says, “In an internal study, we found that online sales account for 20 percent of overall sales of electronic musical instruments in India. And Bajaao had one of the largest shares within this space.”

For this year, Singh’s plan is to grow the Experience and Learn verticals which will, in turn, benefit the Play vertical. It is all inter-linked, he says.

He has identified another untapped opportunity. The company is now tying up with local artisans to manufacture Indian instruments and retail them under a new brand. “We are also tying up with a globally-renowned musician to market the brand,” he says without revealing the musician’s identity. The company has also joined hands with Bajaj Finserv to help buyers pay in installments.

Shuttling between India and the US to oversee the operations of Bajaao and Austin Bazaar, Singh has a lot on his plate. But he is not complaining. “Each month we see considerable growth,” he says with a smile, and continues to tune strategies to make Bajaao’s story a successful musical in a volatile market, where one loose string can ruin the deftly orchestrated business.