Don’t Cry For Me Argentum

Argentum Motors’ three promoters had everything going for them to make their venture a success. Now, things are falling apart, amid a furious blame game

The thing with journalism is, a few years into the business and few things surprise you — or, for that matter, fewer things move you. But that day, a bleak winter afternoon, at the plant which houses Argentum Motors in Surajpur near Delhi, our photographer Amit Verma, was stunned and moved, all at once. He was there to shoot Ajay Singh, the company’s chairman. And he wanted a shot on the plant floor.

As he looked around for power points to rig up the lights, he figured there was no power. And so, for the first time in three years, the generator was switched on to facilitate the shoot. At the precise moment that his lights came on, the workers at the plant went into frenzy and a maniacal energy overtook them. Like men possessed, they ran to their lines and started to switch on every machine they could. Perhaps, they just wanted to hear it hum. Perhaps, they just wanted to know their source of livelihood wasn’t dead yet. And as the machines roared to life, the men on the floor fell to the ground and got into the prostrate position in a Shashtang Namaskar. 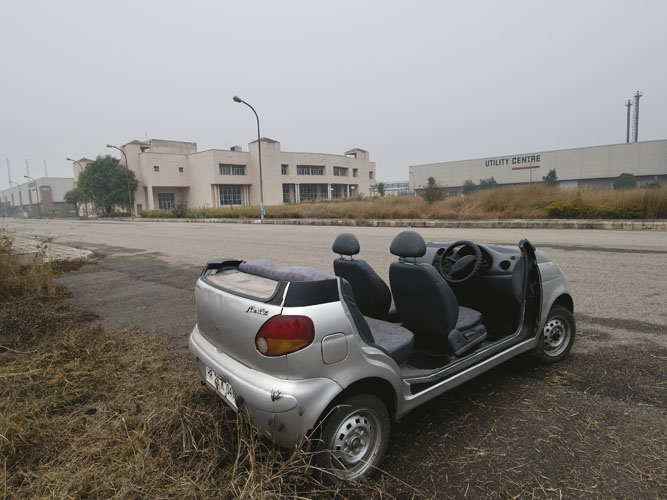 Image: Amit Verma
GHOST TOWN: The once bustling Daewoo plant in Surajpur now lies silent
Times like these, it is difficult to imagine life at Argentum wasn’t meant to be like this after an unlikely trio acquired the plant from the bankrupt Daewoo Motors for Rs. 765 crore in 2007. They included B.V.R. Subbu, an automobile veteran who had spent 32 years of his life in the business. After a long stint at Tata Motors, he moved to Hyundai and is widely credited for its successful India launch.
Then there was Ajay Singh. He first cut his teeth in politics during the mid-nineties with Rajinder Kumar Gupta who was state transport minister for Delhi. He earned a reputation for himself after pushing for significant change at the Delhi Transport Corporation (DTC). It was then that he met Subbu who was with Hyundai and they got to know each other socially. Later, Singh worked closely with the late Pramod Mahajan, a key functionary in the NDA government. Mahajan’s son Rahul introduced Singh to Ashish Deora, a little known Mumbai-based entrepreneur, whom he eventually roped in as the third partner in Argentum.
The three came together at Argentum when Subbu, who had stepped down from the helm at Hyundai Motors (India) was looking for something to satiate the entrepreneurial bug inside him. Daewoo was in trouble and its India assets were up for sale. Subbu reckoned these assets could be put to good use. He spoke to Singh. In a happy coincidence, Singh was on the lookout for something exciting as well.
After the NDA government was voted out of power, he looked outside politics and bet on aviation. His first assignment was at the defunct ModiLuft, which he turned around and in its current avatar is called Spice Jet. That stint had put him in touch with investors looking for the next big India story in an economy trotting away at eight percent.
It didn’t take him too long to rope in Sattva, a Hong Kong based fund, as an investor and DE Shaw as a lender. IL&FS joined in later as an investor. Satva and IL&FS had also been early stage investors in SpiceJet. Singh says he likes the opportunities offered by distressed assets. “The systems in India are so opaque that it is too difficult for an outsider to make things move. Locals who understand the system can turnaround projects,” he says.
Among the three of them, they made a pitch, acquired the company and renamed it Argentum Motors. Singh kept 50 percent of the company while Subbu and Deora got 25 percent each. (Since then, the promoters’ stake has been diluted to 65 percent with Ajay Singh holding 50 percent of that.)
Deora was to take care of the pre-acquisition complications with Arcil and other lenders to Daewoo; Singh would take care of the finances and manage the environment; Subbu would take care of the business.
The beginning was great and the partnership made all the right noises. With its low cost base, India was projected as an option that would give foreign auto companies the critical edge to be competitive. The idea was to refurbish the plant and produce aluminium castings that go into machining, engines, transmissions and body panels.
“This was based on my understanding of the cost structure of large auto players, and my belief that any new global auto OEM wanting to enter the country would need to compete with Maruti, Hyundai and Tata,’’ says Subbu. At some point, they planned to morph into contract manufacturers for large auto companies and finally start manufacturing under their own brand name.
But as things stand, the partnership is in tatters and Subbu and Singh are negotiating an exit strategy for the former and both blame each other for not fulfilling their responsibilities.


What Went Wrong?
By any yardstick, the last two years were abnormal ones. An incredibly complex global environment, a credit squeeze, and elusive deals with auto makers in other parts of the world tested the limits of a partnership that hadn’t been together long enough.

While all the three partners agree economic conditions derailed their plans, they blame each other for making things worse. For instance, Singh claims Subbu failed to deliver on the various deals he was supposed to bring in. He argues that Subbu’s strategy to wait for that one big deal to come Argentum’s way was not practical. And that he would much rather the company got off the ground with whatever orders that came.
He also believes Subbu’s strategy to chase Daimler for truck engines was flawed because what they had on their hands was essentially a car manufacturing plant. He didn’t like the way Subbu functioned either. Referring to Subbu’s near total control over negotiations with prospective customers, Ajay Singh says there was little management bandwidth at the operating level. “But we couldn’t do much. He did not like us interacting with auto guys — he wanted to be the single point person,” says Singh. This, he insinuates, led to the three partners not being on the same page. For instance, Singh says, when he got into the business, he had no idea lead times in the automobile business could be as long as five years. 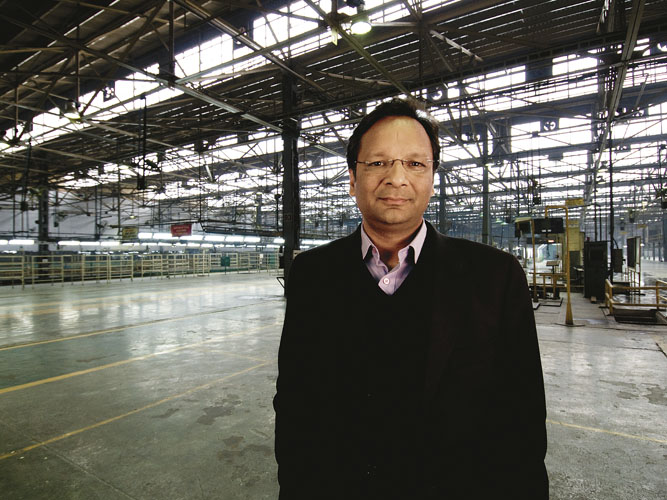 Image: Amit Verma
TORN APART: Ajay Singh cuts a lonely figure at the Argentum plant
Asked how he would do it if given another chance, Ajay Singh says, he would create a stronger team. One that is more sensitive to timelines in the auto business. “We would certainly need a more real revenue generation plan,” he says.
Subbu, on his part, blames Singh for not being able to provide enough working capital to refurbish and move things at the plant. He claims the business plan created in June 2006 predates the partnership and that all the partners and investors had “bought into it”.
In any revival effort, Subbu wrote in an email interview, “We first need to clear all legalities, leverage the assets for working capital and refurbish plant… and simultaneously look for customers. The key issue has been the inability of Argentum to go down this path in a structured manner, due to many reasons, with finance being a significant one.” As for the deals, he says, GM has finally come to Argentum. And that the Daimler truck engine plant was to come up in a new building.
Be that as it may, the partnership also made some horrible mistakes on the way. In mid-2008 for instance, Ajay Singh prematurely announced Argentum had acquired Heuliez, a French company that contract manufactures cars and equipment for 70 million euros. It even set up a Special Purpose Vehicle (SPV) to consummate the transaction. But the Reserve Bank of India (RBI) declined to clear the deal. And furious shareholders of the French company sued the SPV for reneging on a promise.
Argentum is at a crossroads today. Deora is the passive partner. As things stand, it isn’t clear what his role will be like in the months to come. Singh, with IL&FS backing him and a majority stake, will most likely stay at the helm of the company. Sources close to developments say Subbu is most likely to move
on to other challenges in the auto business.
If Subbu exits, Singh and Deora may find it easier to pursue a few real estate deals. They know that in spite of the real estate meltdown, the promoters are aware of the value the 210 acres of land the plant is built on commands. It is worth much more than the price they paid to acquire the business.
There was no court opposition to real estate being developed, says Singh even as he chases auto orders from car majors. Negotiating a mess is something Singh admittedly relishes.

Tweets by @forbesindia
Stay Balanced, Hold on to Stocks with Reliable Cash Flow
Gym Memberships are Up at start of the Year