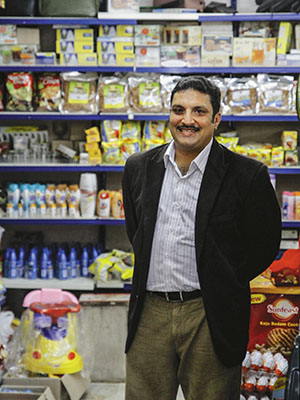 February 2004 was not the best of times to start a business in the Juhapura neighbourhood of Ahmedabad. Two years ago, the city had been gripped by the worst communal riots in its history.

Following the bloody riots in Godhra, Juhapura swelled with refugees, pushing its population up to about 5 lakh, making it the largest Muslim neighbourhood in Gujarat.

In the meanwhile, Nadeem Jafri—tired of his five-year stint at ad agency Grey Worldwide’s Mumbai office—got an itch to start something of his own. Enamoured of a Big Bazaar outlet in the same building as his office in Mumbai, he quit his well-paying job and returned to Juhapura to start a supermarket. Jafri says he considered starting a restaurant and an advertising agency, but discarded the ideas as they would not have given enough returns to investors.

Despite the pervading gloom over Juhapura in February 2004, Jafri opened Hearty Mart, a supermarket at Vishala Circle, on the edge of the neighbourhood. He did not consider its vast Muslim population to be victims and refugees, but potential customers with aspirations like anyone else. And there was no organised retailer catering to their needs: Although there were other superstores, such as Reliance Fresh and Big Bazaar, in Ahmedabad, none had ventured into restive Juhapura.

“Mine was a Blue Ocean Strategy,” Jafri says, between mouthfuls of fried rice and chicken at a Mainland China outlet in a tony mall in the heart of Ahmedabad. The phrase refers to uncontested markets as blue oceans. Apple is a classic blue ocean company.

But, unlike Apple, which created an entirely new market, Jafri only identified an untapped one. He did not create it, but certainly benefitted from the hesitation of others to enter it.

Jafri bet on his relatively prosperous Chilea Muslim community to support the venture, and raised capital from friends and relatives. It helped that his uncle Syed Mushahid Husain Jafri was the head of the sect.

Chilea Muslims—they are Shias with a Sufi tradition—hail from the northern and central parts of Gujarat. Originally a farmer community, they have become a dominant presence in the region’s hotel business and run about 500 restaurants, mostly along highways. They have a string of restaurants in Ahmedabad too.

Jafri says that although no one from the community was killed in the 2002 riots, 90 percent of their hotels and restaurants were gutted and most of the people moved to Juhapura. Jafri had counted on them to form his client base. Yet, after about eight months, he was hunting for a job to support himself.

He left the day-to-day running of the store to his colleagues and took up a job selling space at Times of India and, later, returned to Grey Worldwide. He also started teaching advertising and organised retail at business schools such as Proton Business School, NRIBM and MICA.

Hearty Mart used every tactic in the book, such as customer loyalty programmes and home-delivery services, to raise its bottom line, but progress was very slow. It required sales of Rs 3.75 lakh a month to break even, and it was proving to be a stretch.

That was when Jafri started Hearty Mart (HM) Enterprises, a wholesale supplier to hotels, which would become the backbone of the group. He rightly reasoned that since his community was running hotels, it would be easy for him to get their business. The community’s experience also helped him find people who understood the food and grocery business.

The backward integration paid off. Soon, HM Enterprises was throwing up cash, and its scale was helping Jafri stock Hearty Mart at much lower costs, thus increasing margins.

Around this time, Jafri met Wazir Ali and Hussain Abbas, two entrepreneurs who had started Ashish Enterprises, a supplier to highway hotels. HM Enterprises was still focussed on Ahmedabad.

Ali and Abbas proposed a merger and Jafri accepted on the condition that they would help build HM Enterprises into a food company with interests in the entire farm-to-shelf value chain.

One day, Hemant Trivedi, then a professor at MICA and with whom Jafri had written a case study of Hearty Mart, wondered why he did not expand to villages. Jafri said he did not have the capital. Trivedi, who teaches retail business, suggested franchisees as a solution.

“Here was a business model that did not require high standards of education or skills. An owner-franchisee would be more involved,” says Trivedi, who is now director at the School of Petroleum Management, Pandit Deendayal Petroleum University, Gandhinagar.

This set Jafri thinking. “HM Enterprises was making delivery runs to supply highway hotels. It could deliver to franchisee stores at a marginal cost,” Jafri says. By then, he had also set up another company, HM Logistics, which took care of distribution.

In 2007, Jafri set up the first franchisee store in Illol, a large village surrounded by a number of smaller villages. Here too, connections within the Chilea Muslim community helped. Shabbir Bhai, a manager at Ahmedabad’s Hearty Mart, was from Illol, and he found two brothers—Mehndi and Mehmud—who volunteered to start the franchise.

“My focus is on creating entrepreneurs,” says Jafri, who does not solicit franchisees. “They should feel the need in their locality and come to us. They should be convinced about the business model.”

Hearty Mart charges a one-time fee of Rs 15,000 from a franchisee. There is no royalty in the first year of operation, and from the second year it is 0.5 percent of profits. Hearty Mart franchises have two kinds of stores: The walk-in supermarkets, and over-the-counter stores called Saral, which sell similar merchandise but the stores are smaller in size and cater to smaller villages.

“The biggest competition here is over local brands, because other kirana stores give hefty discounts on them. So, to beat them, at times we sell them at actual costs. But our profits come in from other branded products that they buy,” says Sadiq Ali, a former employee of Hearty Mart, who is now the largest shareholder in the Dholka franchise.

Dholka is the shopping centre for the 30 villages that surround it, and store shelves are a reflection of local aspirations. They are stocked with global brands such as L’Oreal, Johnson & Johnson, Dove, Pears, Maggi and Sugar Free, alongside local brands and Hearty Mart’s own Chef Ki Pasand spices and Day Break tea. Jafri created Chef Ki Pasand as a wholesale brand that he supplies to restaurants, but it now competes with brands such as Badshah and MDF.

Hearty Mart just opened its 12th store in Dholka, its second largest after the one in Ahmedabad. It is housed in its own 13,000 sq ft building, constructed at a cost of about Rs 1.25 crore. The capital for the project came from Hearty Mart, Sadiq Ali and several employees of the company who bought small stakes.

Each venture in the Hearty Mart group is run by a different entrepreneur. Typically HM Enterprises holds about 25 to 30 percent stake, and the rest is distributed among those who run it.

Jafri says this is what keeps them committed, and keen to develop the business. “One of the things that Hearty Mart did was to discover the latent entrepreneurial talent in villages, particularly within the Chilea community,” says Munish Alagh, post-doctoral fellow at IIM Ahmedabad’s Centre for Management of Agriculture. Alagh, who has documented the Hearty Mart story in a case study, says one of the reasons for the community’s success is their pragmatism and culture of service.

Like all supermarket chains, Hearty Mart’s success also lies in its ability to source products at low costs. The scale of purchases helps chains such as Big Bazaar and Reliance Fresh, or international ones like Walmart and Tesco.

But the size and scope of Hearty Mart stores cannot bring in the cost advantage. HM has gotten around the problem by integrating a wholesale supply business to the retail one.

The opening of Hearty Mart at Vishala Circle in Juhapura also helped change the perception of the area. The store became a landmark of sorts at Vishala Circle, which, until then, was a nondescript bend on the Sarkhej highway. “It was something that was identifiable with the rest of Ahmedabad, and was not available in Juhapura,” says Alagh. Soon, a bus stop for private bus operators developed near Hearty Mart and Axis Bank opened an ATM at the store. A property developer is now building an upmarket residential complex opposite the shop. A Mumbai-based restaurant chain has also opened an outlet near it.

For Nadeem Jafri, the challenge now will be spreading to areas where the community is not strong or present at all. There is still some way to go before Hearty Mart can saturate northern and central Gujarat, and the region itself may give it enough heft to become an end-to-end food company.

(Additional reporting by Alok Brahmbhatt in Ahmedabad and Dholka)

Tweets by @forbesindia
Lighting Up
Global Talent Track: By the People