How resisting takeover bids paid off for TeamLease

With the business of skilling becoming an economic imperative, it is no surprise that the staffing firm's co-founders Manish Sabharwal and Ashok Reddy are reaping the benefits of their temping firm's stellar stock market debut 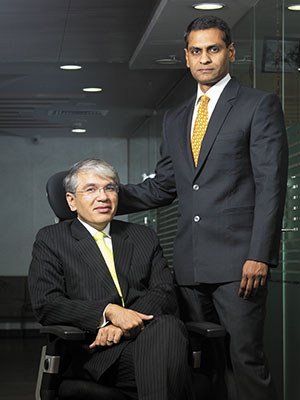 Having emerged as the largest player in India’s temporary staffing scene, TeamLease Services Limited co-founders Manish Sabharwal and Ashok Reddy have been inundated by suitors since 2005. But they were too convinced about the scale of their human resource services business to sell.

“About eight to 10 years into the venture, it became clear that we didn’t want to sell the company. That was because we wouldn’t get to see this kind of scale and impact in our lifetime again,” recounts Sabharwal, chairman of TeamLease.

College mates Sabharwal and Reddy started TeamLease in 2002 with the faith that staffing would become the infrastructure of the modern economy. Today, 97-98 percent of TeamLease’s Rs 2,000-crore revenue comes from the temping business, wherein the firm provides temporary employees to a slew of companies such as Microsoft India, LG Electronics, ICICI Lombard, Bata India and Larsen & Toubro. The rest of its revenues come from consulting, training and education—businesses that were started in the last six years.

Sabharwal and Reddy also knew that the combined Rs 150-crore private equity (PE) funding that they received from Gaja Capital and ICICI Venture—for a 42 percent stake between 2009 and 2011—came with an “expiry date”. Typically, when suitors come knocking to buy a business, PE players want to explore their options to the fullest. “We had multiple knocks on the door from suitors,” recalls Reddy, managing director of TeamLease.

But the TeamLease founders resisted the takeover bids. “Choosing the right PE investors—the colour of money is more important than the quantum of money—and tapping the public market were important alternatives to an early sale of the company,” says Sabharwal. They had also considered a US listing before 2014, when investor interest in the Indian equity market was weak. It helped that TeamLease was the second business venture of Sabharwal and Reddy. “So you have seen the movie before and you know how to deal with investors,” adds Sabharwal.

Their decision not to sell has brought them rich dividends. On February 4, Bengaluru-based TeamLease’s initial public offering (IPO) was oversubscribed nearly 66 times and on February 12, its share price soared by 21 percent to Rs 1,032 on market debut, despite a weak stock market. A week later, on February 19, TeamLease’s shares closed at Rs 1,137 apiece, or 34 percent higher than its IPO price of Rs 850. In comparison, in the same two-week period, India’s benchmark BSE Sensex shed close to 630 points.

In the IPO, existing investors Gaja Capital and ICICI Venture offloaded around 3.21 million shares, while TeamLease issued fresh shares worth Rs 150 crore. Even after their partial exit, the PE firms continue to hold around 20 percent in the firm. Sabharwal and Reddy together own nearly 50 percent in TeamLease post the listing.

“TeamLease’s IPO was different from the recent initial share sales in terms of the industry, founders and the PE players backing them. It was the first large IPO in its space [human resource services] and a trendsetter,” says Harish HV, partner, India leadership team of Grant Thornton India LLP.

So, what is the business model that these IPO investors have bet on? TeamLease finds the right candidates for its client companies and then inducts them into its own payrolls. These employees are then deputed to client locations. The back-end support systems of human resource management, payroll processing, and other statutory compliances (example, paying of provident fund) are done by TeamLease. The company’s revenue generation is based on a service-fee model with clients. This sums up the core staffing business of the company.

“They took on a business [temporary staffing], which by its very nature, seemed grainy, unclear and perhaps even viewed with suspicion, and got it going. Today, I think they are taken seriously when they look at themselves as purveyors of the entire supply chain of human resources in India, covering the three Es: Employment, employability and education,” says Priya Chetty-Rajagopal, board member and executive director, Leadership & Board Practice at RGF Executive Search, India, the executive search arm of Japan-based human resources firm Recruit Holdings.

On any given day, TeamLease has around 110,000 employees (or associate employees as they are called) working as temporary staff in over 1,200 companies across 5,500 cities in India. The average salary of these employees, 60 percent of whom hold a bachelor’s degree, is Rs 16,000 per month. Their average age is around 21 years and most of them are freshers in the job market.

The journey of Sabharwal and Reddy is perhaps the quintessential entrepreneurial story. Reddy, now 46, and Sabharwal, now 47, met in 1987, at Shri Ram College of Commerce, New Delhi, where they had enrolled for a bachelor’s degree in commerce. After completing their graduation in 1990, they went separate ways—Sabharwal started working in the forex and financial services sector and Reddy in investment banking. Sabharwal later earned a master’s degree in management from The Wharton School, in the US while Reddy got his management degree from the Indian Institute of Management, Bangalore.

In 1997, they joined hands to float their first venture India Life. It was a payroll processing and pension administration outsourcing company. In 2002, the erstwhile human capital and management consulting services firm Hewitt Associates bought India Life.

“Basically, both companies (India Life and TeamLease) have been about concept arbitrage. Such companies exist globally, so they have to exist in India as well,” explains Sabharwal. But, the narrative is being rewritten at TeamLease in order to adapt to the Indian market.

Connecting demand with the supply of human resource is what TeamLease has been doing from the start. But in the recent past, it also has been working “on repairing and preparing the supply,” as the co-founders put it. According to them, out of 90,000 job seekers who come to TeamLease every month, the company is only able to hire 4,000 to 5,000. It’s not that the other kids have a “birth defect”, they clarify. “Our university system and the school system are not giving kids the skills that they need to be job ready,” explains Sabharwal.

To tackle this problem and widen the company’s scope of business, in early 2015, TeamLease started a vocational university—the TeamLease Skills University in partnership with the government of Gujarat. The university’s curriculum allows students to get deputed to organisations to learn on the job. Currently, the university has close to 12,000 students, 99 percent of whom have been deputed to learn at various companies.

“Their partnership with the public and government is a testament to the stature that the organisation and founders have—the ability to provide an on-ground, deeply collaborative picture that could result in better outcomes in skill development,” says Chetty-Rajagopal.

Sabharwal admits that the company didn’t start with a framework of matching, repairing and preparing supply to match demand. “We have evolved differently. So, when I say concept arbitrage, it doesn’t mean photocopying what happens overseas, but modifying it to what India needs.”

After a gruelling nine-month, pre-IPO listing period, the co-founders of TeamLease, who have been friends for 29 years, seem relaxed at their office, which is located in Bengaluru’s central business district of Koramangala.

Sabharwal and Reddy believe they have a real chance of building TeamLease into one of three things: India’s largest private sector employer—today, it is TCS with three lakh employees; India’s largest private university—at present, it is Manipal University with over 28,000 students; or they could be the world’s largest staffing company—now, it is Switzerland-based Adecco, which has about seven lakh employees on any given day.

The founders’ belief in the future of TeamLease is one that even investors bought into. “The TeamLease IPO was a play on India as a whole, given the country’s demographic dividend,” says Harish of Grant Thornton.

Sabharwal and Reddy are polar opposites—Reddy is an introvert and Sabharwal is an extrovert. And this is evident when they are together, as Sabharwal is the one doing all the talking. But, there are more differences than that. “He [Reddy] is very patient with cribbing employees and has therapy sessions with them. I make them cry. He [Reddy] pays attention to detail, I hate operations. I love public speaking, he hates public speaking,” Sabharwal rattles on. His final assessment is: “My weaknesses are his [Reddy’s] strengths.”

While their friendship is intact, it doesn’t come in the way of their work. Says Reddy, “From a personal and professional perspective, we keep the two different. On the professional front, we agree to disagree and all points of discussion and debate are on the table as transparency is the best way to work.”

Very often, Sabharwal gets calls from chief executive officers of large companies telling him that they would quit their job if they found the “perfect idea”. But, Sabharwal believes it’s a misunderstanding of the entrepreneurial process and that there is no such thing as the perfect idea. “Entrepreneurship is a process of evolution and mutation,” he says.

“With TeamLease, we were very clear that at some point, the world will recognise that staffing is the infrastructure for the modern economy. It took a while, but I think we are still a baby in diapers,” says Sabharwal. Given their conviction in the business, the founders seem ready to hand-hold this child till adulthood.