Can Bvlgari succeed in India in its second coming?

The Italian luxury brand re-entered India in November last year after making an exit in April 2011. Can it weave its luxurious magic this time around? 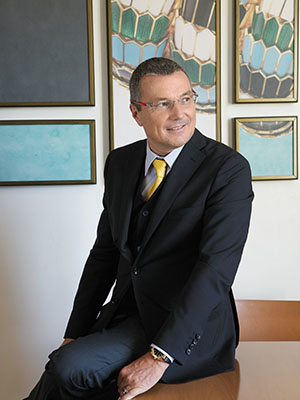 The maharajas and maharanis may have lost their kingdoms but they’ve left behind a legacy that Indians embrace enthusiastically: A love for gold, diamonds, precious stones, and all things bling. This abiding passion is perhaps why Italian luxury goods brand Bvlgari—best known for its jewellery and watches, and more recently even leather goods and perfumes—is re-entering India, after having exited the country in April 2011. At the time, it ended a seven-year partnership with Lifestyle Tradelinks India and shut down its two stores. (A month prior to Bvlgari’s exit, French luxury conglomerate LVMH Moët Hennessy Louis Vuitton had acquired a controlling stake in the Italian brand.)

In its second coming, Bvlgari—recognised by its coloured gemstones and the iconic Serpenti design in both its jewellery and watches—has tied up with a silent partner and claims to have more control of its operations than it did in its previous avatar. In November 2014, the luxury brand opened its flagship store in Delhi’s DLF Emporio with plans to expand to Mumbai, Bangalore, Kolkata and Kochi. And unlike its first entry at The Oberoi Hotel in Delhi, the new Bvlgari outlet is as luscious and opulent as the jewellery it sells.

“This is our real coming [in India] as we have created a full-fledged Bvlgari subsidiary based in Delhi which will handle our retail and wholesale operations for jewellery, watches and accessories. We were earlier exporting to an agent and therefore not controlling our image, awareness building or assortment and pricing,” says Bvlgari CEO Jean-Christophe Babin in an email interview with ForbesLife India.

The decision to re-enter India could not have been made easily, especially because tapping the country’s luxury market is still a challenge for most brands. In a 2013 report, global consulting firm Bain & Company estimates that though India’s luxury market is worth $6 billion, and growing at 15-20 percent annually, it still lags behind that of China’s. Luxury retailers are straggling with about 60 stores; China has 1,100 high-end outlets.

Bvlgari, however, is better prepared to woo the well-heeled Indian, it says. For one, it will tweak its jewellery designs to suit local tastes: There will be more yellow gold as opposed to pink gold, which is popular in the West. “But it will be very subtle; an Indian travelling from Delhi to London must find the same Bvlgari [designs],” says Babin, who is aware of the price sensitivity of the Indian consumer.

The oft-repeated complaint is that the import duty on luxury products (20 percent upwards depending on the category) makes goods in India more expensive. This is also why consumers prefer shopping in Dubai rather than in Delhi. But Babin claims to have figured out how to fix this. “As I did with TAG Heuer, (he was CEO of the watch brand before taking charge at Bvlgari), we will bear most of the tax burden to ensure near parity with Dubai,” he says. “It’s an investment.”

Bvlgari will also have to play catch up with international competitors like Chopard (retails through Dia) and Cartier, which opened its flagship boutique in 2008 at Emporio Mall, but is yet to expand beyond Delhi. But all signs point to the 130-year-old Italian company’s determination to settle down in India for the long haul.

Bvlgari, like all its competitors, offers luxury products in various categories which are sold through multi-brand retailers and department stores respectively. It has no immediate plans to change this distribution model. “We are one of the top three fragrance brands in the country, suggesting that we have the right (distribution) partner. We work closely with our partners for product development and are adapting and creating essences more relevant to Indians like woody orientals,” says Babin. (For its distribution operation in India, Bvlgari has partnered with Beauty Concepts Pvt Ltd.)

Now, however, Babin will have to remind Indians that its jewels have graced the likes of Hollywood greats Sophia Loren and Audrey Hepburn. Elizabeth Taylor claimed that the only Italian word she knew was Bvlgari. And her on-off husband Richard Burton, who presented the actress with an emerald necklace and a 65-carat cabochon sapphire and diamond chain from the Italian house, is believed to have said, “I introduced Liz to beer, she introduced me to Bvlgari.” 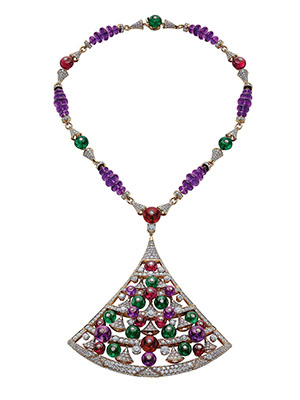 Designed to please: Bvlgari is known for its coloured gemstones and designs in both jewellery and watches

Though the company has no immediate plans of appointing an Indian film star as its ambassador, its official launch event at the Taj Mahal Hotel in Delhi had all the glitz and glamour that’s associated with Bvlgari. With Bollywood actress Sonam Kapoor gracing the front row, designer Anamika Khanna presented a fashion show where her clothes were appropriately matched with Bvlgari’s jewels.

But for all its history and glamour, the brand has its work cut out. Unlike a Louis Vuitton or a Gucci that have seen growth on the back of hand-crafted leather goods that don’t have much local competition, Bvlgari in India will have to go head-to-head with formidable Indian jewellers and brands such as Tribhovandas Bhimji Zaveri.

Also, though jewellery consumption in India remains robust, it is the family jeweller that people often turn to. “Indians have and will continue to be flamboyant in their jewellery choices. We love our chand balis and jhumkas (both very ornate Indian earring styles). But the demand for contemporary designs has been growing. This is in part because of the way we socialise. We upload one picture on Facebook or Instagram and don’t want to repeat that look,” says Shaheen Abbas who retails diamond jewellery under her own label. She also has an ongoing collaboration with GEHNA Jewellers.

The personalisation that Indians love in their jewellery could prove to be a drawback for international brands. “It’s accepted that others may own a similar Louis Vuitton bag or a Mercedes car but in India, consumers can’t accept someone else wearing the same jewellery. They want something unique and bespoke, which only independent jewellers can provide,” says Moin Motiwala, CEO and a sixth generation jeweller at Mumbai’s AK Motiwala Jewellers. “Most international brands will only have limited designs.”

Worth a watch: Like its competitors, Bvlgari offers luxury products in various categories, including watches and perfumes, which are sold through retailers and department stores


Babin remains undaunted because recent trend reports from Euromonitor International and Bain & Company show a rise in the share of the global brand vis-à-vis traditional ones. “Traditional jewellers own the market here as they did in Europe a few decades ago. But that was before the upper middle-class and wealthy became nomads, studying, working and marrying in other countries,” he says. “They left their birthplace to become global citizens. In this new world, the trustee cannot be the traditional family jeweller; it has to be the global brand.”

This could explain why Nirav Modi, the eponymous founder of his jewellery brand, is heading to the US with the launch of a boutique at Madison Avenue, New York City.

According to Modi, Indian sensibilities have been evolving over the last decade. And though consumers still love their jhumkas and chand balis, they are always on the hunt for something different. “While gold has traditionally been seen as an investment by Indians, diamonds are steadily gaining ground with their value almost doubling every decade. More Indians are opting for versatility and for designs that can be worn in the day and just as easily for a glamorous evening or a wedding,” says Modi.

Consumers want impeccable quality and finish, which they find in international brands, and now expect in Indian labels too. And this is perhaps where Bvlgari will thrive.

But the Italian brand will also have to be prepared for another battle: The all-pervasive penchant for copying famous designers. It’s not unusual for skilled craftsmen to recreate designs from European houses at the behest of a client. While the global citizen wants to be seen wearing Chopard earrings, he or she doesn’t want to spend as much.

In Mumbai, the Turner-Waterfield Road stretch at Bandra is lined with jewellers who share anecdotes of making copies of international designs at one-fourth the cost. That said, they are wary of making exact replicas of famous pieces. “It’s a safeguard to avoid being sued for copyright violations,” says one jeweller.

This aside, if luxury brands need to grow in this country, they will have to make an effort to educate the Indian consumer, say experts. And Bvlgari plans to hold local exhibitions and retrospectives like the ones they host in China and the US. It’s an effective way to get Indians acquainted with Bvlgari’s history.

Local jewellers don’t necessarily see Bvlgari and other international houses as competition, and believe that India is at a stage where there is interest and demand for both contemporary and traditional looks.

“The more the merrier,” says Abbas. “We provide one-of-its-kind designs, attention and very sensible price points, while Bvlgari has its own USP. Even I’d love to walk into Bvlgari and buy something.”

And that’s half the battle won for Bvlgari.