The regal trunk gets a facelift

No longer a travel companion but still a handsome storer of indulgences, the modern-day trunk is a nostalgic hat-tip to history, with contemporary design values. Consider the creations of Trunks Company, many of which are bespoke for erstwhile royalty 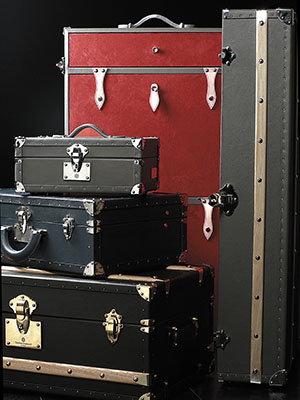 Time was when a trunk was the quintessential treasure chest for the ruling elite. Today, it has become a treasure in itself, evoking nostalgia for a bygone era, particularly among royals who, in a hat-tip to their heritage, are giving the trunk its pride of place: After all, no one appreciates history quite like maharajas and maharanis.

Bearing insignias and their owners’ coats of arms, trunks have been a loyal and, often, luxurious companion to them for centuries, especially on voyages by sea. After World War 1, the art of trunk-making got real impetus, when leisure travel by steamer ships became the rage. Aristocrats and the nouveau riche alike began to order trunks—hatboxes, jewellery cases and luggage—to store silks and other finery.

Revered European houses such as Louis Vuitton, Goyard and Moynat were some of the coveted malletiers (French for trunk-makers) who created and engraved bespoke luggage for the rich. They even received a fair share of orders from Indian royalty. Maharaja Umaid Singh of Jodhpur, who ruled from 1918 to 1947, is said to have ordered a set of five custom-made Louis Vuitton trunks for a sea voyage that he undertook in 1925 to attend a polo tournament in England. These leather trunks still lie preserved in the Jodhpur palace by his grandson, Gaj Singh II of Marwar-Jodhpur.

But as planes started to replace ships, trunks were nudged out of mainstream travel and air travel started the trend towards lighter luggage. As demand dwindled, so did production but trends, like most things in life, trace circles. Fifty years later (in the late 20th century), descendants and heirs recognised trunks as family heirlooms and started having them restored, recognising their inherent aura of royalty. Perhaps that is why when Gaj Singh II sought to house his enviable collection of watches, he, like his ancestors, looked no further than the trunk. He turned to Trunks Company, which, now in its fourth year, has emerged as one of India’s premier malletiers. And the bespoke trunk created for him was the reason for ForbesLife India’s visit to the company’s Jaipur offices earlier this year. 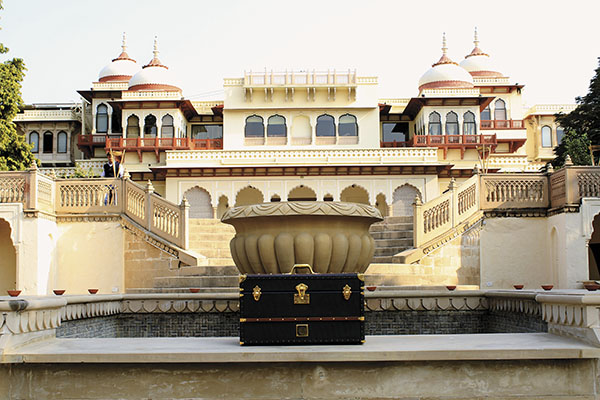 A touch of metal: The gleaming brass rivets and knobs contrast with the leather exterior of the trunk, giving it a regal appearance

“The regal design of the trunk with a strong Indian influence appeals to me the most,” Singh told us in an email interview. And a closer look at the trunk explains his satisfaction. It blends old-world craftsmanship with contemporary style: The exterior is designed in navy blue leather and has gleaming brass rivets, handles and knobs; there is an engraved nameplate carrying the crest of the royal family of Marwar, and it is finished with a bright yellow suede interior, delicate teak wood contouring and one of the best watch-winders in the world (imported from one of London’s oldest and finest manufacturers, Rapport). 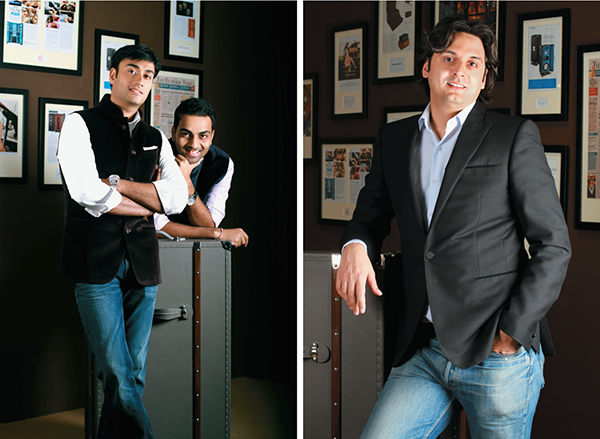 The trunk tells a story of passion and skill, and also of Indianness with fine design values, the foundation on which brothers Priyank (36) and Paritosh (31) Mehta built Trunks Company.

During their travels to Europe for the family export business, the brothers would come across trunks in exclusive showrooms and private residences. They observed that heritage was as important a facet as function, and kept this is mind when, in 2011, they decided to start a company that specialised in creating one-of-a-kind trunks. With its rich culture and past, Jaipur—the city they called home—was the perfect headquarters.

A chance meeting with Parisian designer Livio Delesgues, who studied product and interior design from applied arts school Académie Charpentier, Paris, while he was vacationing in Jaipur, Rajasthan, proved serendipitous. Today, the 34-year-old Delesgues divides his time between Paris and Jaipur, and is the chief designer with Trunks Company.

Before they started manufacturing, the brothers embarked on a two-year reconnaissance during which they found (and trained) quality-conscious craftsmen in Jaipur, identified the best sources of raw materials from across the world, and drew inspiration from diverse muses. They imported leather from Italy, suede and supple lambskin from Chennai, and rivets from France. They designed the hardware themselves, custom-making it either in Jaipur or Alibaug, which is known for its
brass work.

The result of their work is showcased in the company’s atelier in Jaipur’s industrial district of Kartarpura. The wide range of trunks talks to the modern connoisseur, who prizes life’s pleasures—be it aged whiskey or vintage sunglasses—and finds that the regal trunk houses them befittingly. Think dark shades of blue, red, grey and espresso with suede or lambskin interiors in bright tones of yellow, pink and pastel blue. Brass handles, which are silver- or gold-plated at the behest of their owners, gleam in the atelier’s subdued light.

Trunks Company’s expertise lies in designing pieces tailored to the passions of their users. Consider a trunk that holds rifles and swords inherited by a young Rajput gentleman. Or one that can swivel and house shoes for the sartorialist, or one that lends itself to a game of poker, or displays jewellery, or even one that is dedicated to music with speakers, space for CDs and a state-of-the-art music system. 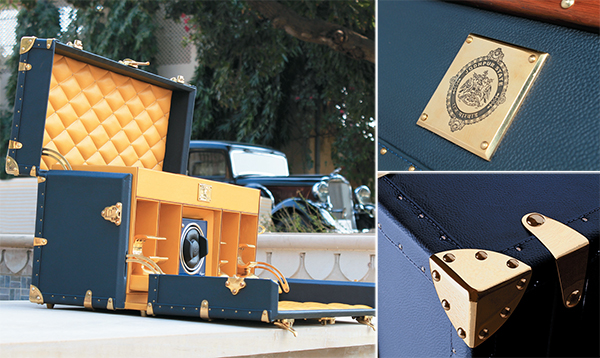 Bespoke luggage: The Royal Watch Trunk was crafted for Gaj Singh II of Marwar-Jodhpur. It has a blue leather exterior, brass rivets, a nameplate carrying the crest of the royal family and a lambskin compartment for his priceless watch collection

Steamer trunks, which were stacked during sea voyages, remain the most popular pieces of luggage. They form the basis of Trunks Company’s work, but the brothers have upended the rules when designing the cavernous insides. The poker trunk, for instance, has wheels for easy manoeuvrability as well as a top drawer that contains a cigar box, a cigar cutter, a lighter, an ashtray and a cigar pouch. There is a set of drawers for poker chips, a separate shelving area to store decanters and flasks, a tray to serve the drinks, glass holders, drawers for money, and another for felt. The top of the trunk unfolds to reveal a polished teak wood tray, a resting place for a drink or even a cigar. “What is the point of sticking to old ideas when lifestyles have changed?” asks Paritosh. “We have reinterpreted trunks to carry the symbol and code of the past, but recreated them to suit modern routines.” 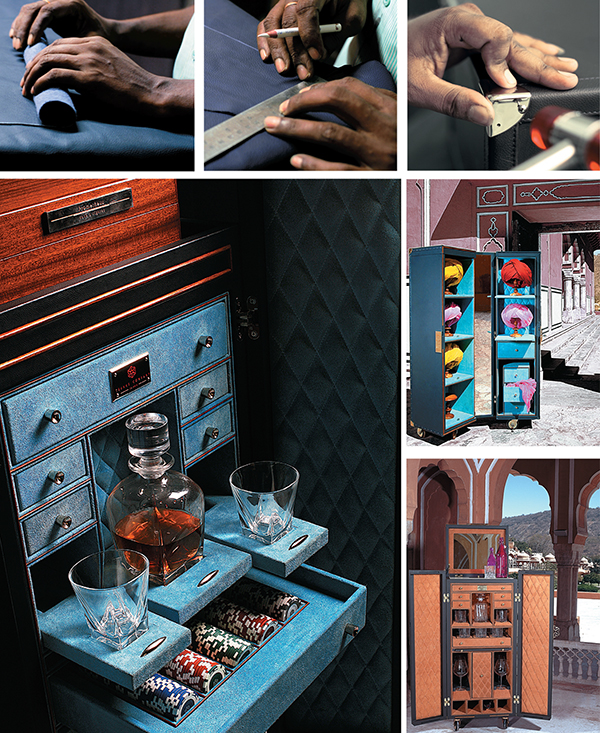 Attention to detail: (top) At the workshop in Jaipur, one craftsman marks out leather while another puts the finishing touches to a trunk; (below left) the commissioned pieces of ‘luggage’ reflect the passions and hobbies of their owners. Seen here is the Poker trunk with chips, a tray to serve drinks and a decanter; the Turban trunk for an owner to display his head wear; and the Rajputana bar trunk

He and Delesgues are particularly proud of a ‘bar trunk’ that took up an entire wall of the owner’s house. Catering to another special order, they created a silver and brass trunk, which required 22 kg of silver.

It takes months, anywhere between 40 and 180 days and an average of 400 hours of painstaking labour, to make one trunk. The price of a single piece can range from Rs 3-4 lakh and can go as high as Rs 18 lakh, if not more. The hefty price tag is not a deterrent. “Such handcrafted trunks are timeless and will always be a unique reminder of an era of leisurely travel with an enduring elite appeal to those who have taste and an eye for luxury,” says Singh.

He is not the only erstwhile royal to have approached the Mehta brothers for a bespoke piece of luggage. Others include the recently married Lakshyaraj Singh Mewar of Udaipur. 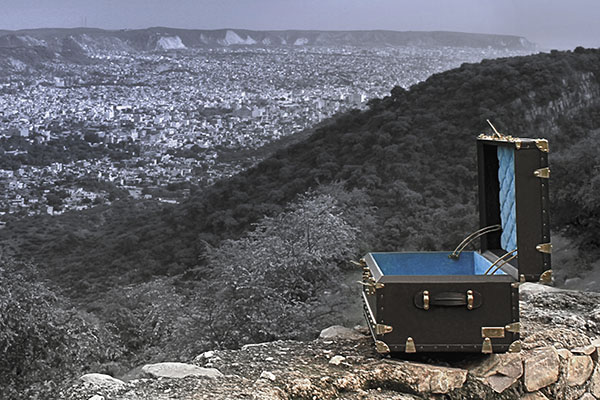 Bon voyage:  A modern interpretation of a steamer trunk, which was popular when travel by sea was the norm

Then there is the royal family of Qatar, which visited Jaipur last year; they came across an installation of trunks at the hotel they were staying in. One thing led to another, and among the range of trunks that the atelier designed for the royal family was a unique piece to store ittar (non-alcoholic perfume extracted from flowers). The ittar trunk was a rare and exciting challenge for Delesgues. He needed the measurements of each crystal bottle holding the precious perfumes so that he could design the perfect resting place for them, without the threat of spillage or spoilage.

“These trunks are a sublime vision of old-world craftsmanship with an inherently Indian spirit—concept-driven and vitally functional,” says Delesgues. It is an art form which, for all its modernity, adheres to traditional craftsmanship. Even the safes installed in jewellery trunks have traditional wheel-based locks, not only to keep the vintage appeal, but also because this mechanism is said to be more reliable than its digital counterparts. Everything from the lever mechanism to electronic elements (like the watch winder in the Royal Watch Trunk) is either designed in-house or imported from specialists. Most trunks also have tiny LED lights embedded in the interior to present the objects of the owner’s affection in greater detail. After all, a 21st century trunk doesn’t just store prized possessions—it displays them. “The focus is on the treasure factor,” says Delesgues. 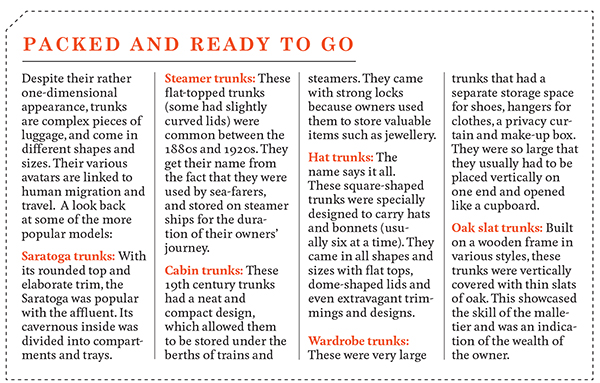 The trunks tend to contain inherently Indian motifs. The company’s logo is inspired by Indian jaali work, and the use of vivid colour inside the trunks has the stamp of Rajasthan. Tradition is important to Paritosh and Priyank who are endeavouring to incorporate art and craft native to Jaipur (carvings, embroidery or even fabric) in the design. “We want to transform trunks to become statement pieces used to cherish one’s treasure, quintessentially urban in functionality, but with the reflection of [Indian] heritage,” says Paritosh.

Stamped with the past, built for the present and preserved for the future, these trunks are built to hold everything—even a bit of yesteryear magic.

(The writer had travelled to Jaipur on the invitation of Trunks Company.)