He inspired fierce loyalty among his followers and fear among his rivals; in death, YSR leaves behind a larger than life image

YSR, as Dr. Yedugoori Sandinti Rajasekhara Reddy was popularly known in Andhra Pradesh, had played out his own version of the Cold War doctrine, “Those who are not with me are against me”; and its rather illogical extension that “those who are with me ought to be against others.”

He demanded fierce loyalty from his followers and reciprocated it by way of unflinching support. That defined his political style during his long career spanning almost three decades. It earned him bitter political foes along with diehard followers. Rarely did one find him at a negotiating table. He refused to be a courtier even when the Congress culture expressly demanded it as a price for political upward mobility. He wrested positions only by waging battles. He always preferred the bugle to the olive branch. That’s perhaps why he had to wait to become the chief minister of the state until battles decided political fortunes rather than high command’s patronage. 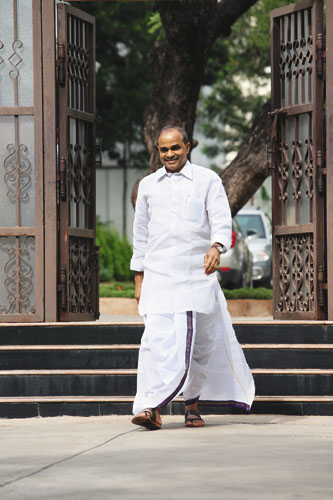 Image: D Ravinder Reddy for Forbes India
WALKING INTO HISTORY: YSR always preferred to bugle to the olive branch
His political beginning was modest from Kadapa district of the faction-ridden Rayalaseema region. He did not hold any important office since his first election as a lawmaker in 1978 till he became the chief minister in 2004 except for a brief stint as a junior minister in the state cabinet holding some inconsequential portfolio for about two years. He became the president of the state Congress within a short time after his political debut as a legislator.
When the Congress was on the back foot following the unseating of N.T. Rama Rao by an ugly palace coup, no tall leader was available to the party to lead it in 1984 Parliament and 1985 Assembly elections. Rajiv Gandhi picked him to head the state unit. That’s when YSR began to be a recognisable actor on the larger stage of state politics.
And that’s when his nurturing of a statewide following began. Most of them who continued to remain loyal to him were those who were selected by him as candidates or state Congress office bearers. The party’s fortunes were at its lowest at that time. There were, in fact, few takers for both the tickets and the party positions. This made YSR’s job easy to groom a new and fiercely loyal following. That political capital lasted till his very end. Any succession plan will have to contend with this highly inflammable political group.
Rajesekhara Reddy never lost an election. Since 1978 when he first won his Assembly seat, he never ceased to be a legislator. He was either a member of the state legislature or the Lok Sabha. He was elected four times to the Lok Sabha. But he seemed to be a reluctant member of the House and perhaps saw it only as a way of retaining political hold over his native district. When he went to the Lok Sabha, his brother kept his Assembly seat warm for him. And when he was to go to the state Assembly, he sent his brother to the Lok Sabha. Now, of course, his son, Jaganmohan, sits in the House. He got elected six times to the state legislature. And it is here that his political passion was evident.
YSR’s imprint on Andhra politics is not merely on account of what he did after he became the chief minister of the state. That, of course, is very important. He rooted for huge irrigation projects; talked about priority to agriculture, rural sector and the farmers in contrast to his hi-tech and IT-loving predecessor Chandrababu Naidu. Reddy made almost every family living below the poverty line the beneficiary of one or two, or even all of his government’s welfare schemes: Old age pension, subsidised rice at Rs. 2 a kilo, free medical insurance, to name a few. Public debt, as a result, mounted. State finances came under severe strain. But that did not deter him.  His promise of free power to agriculture did not find favour with the Planning Commission, the then Union Finance Minister, and even Prime Minister Manmohan Singh. But he persisted. His trench mentality didn’t heed to counsel of prudence in public policy.
While he kept the masses happy with the welfare schemes, he faced strong allegations that he used slush money from huge irrigation and industrial projects to keep his political network well oiled. He remained nonchalant in the face of persistent campaign by rival political parties and the media about his and his ministerial colleagues’ corruption. He tried to blunt the media criticism by attributing ulterior motives to some media outlets.
The demand for a separate state for Telangana region became a strong sentiment within the Congress party too. Although it was considered politically incorrect not to favour Telangana statehood, YSR made no secret of his opposition to the division of the state. He deployed every means to extirpate Telangana Rashtra Samithi (TRS), the party that champions the cause.
Today, the TRS is a pale apparition of its former self. Although his government’s position was not uncomfortable in terms of numbers, he began a systematic campaign to bring in legislators and other important leaders of rival parties into Congress. The main opposition Telugu Desam and the newly formed Praja Rajyam of the matinee idol Chiranjivi began to succumb. This will all change now.  No new leader of the Congress is likely to inspire as much confidence in those who would like to cross the floor.
YSR’s strong imprint is also on account of the manner he earned the position of chief minister. The way he waged the 2004 and 2009 election battles was, indeed, a game changer in the state politics. YSR’s 1,500-kilometre pada yatra in the scorching summer of 2003 marked his transition from a consummate Congress infighter to a mass leader. It breathed new life into the Congress which was then on the verge of extinction after being out of power for a decade. He was not even the State Congress chief then to initiate the campaign.  He wrested the initiative and therefore, the leadership. This long walk throughout the length and breadth of the state made YSR an unrivalled leader of the Congress party in the state. In fact, after the yatra, he didn’t have anybody to fight against in his own party.
The Congress, and indeed the state itself, are not prepared for his sudden exit. With every other leader in the party dwarfed by his towering personality, the cadre got used to trust the political fortunes of the party to his care.  It will be a while for them to accept another leader who is unlike YSR.
For the new chief minister to continue the slew of expensive welfare programmes in the face of dwindling revenues will be a formidable challenge. Anybody who succeeds him will have the tough task to measure up to YSR’s larger than life image in the public imagination.