The government looks at 3G telecom licensing as a means to raise revenue. It might end up killing the nascent industry

How much is too much? Do you factor in future trends or go with the current flow? The telecom ministry would have grappled with these questions when it fixed Rs. 3,500 crore as the reserve auction price for each of the four pan-India spectrum licences for third-generation (3G) telecom services that it plans to auction. This price is nearly double the entry fee that companies like Unitech paid in 2007 in the second-generation era. This is where the questions crop up.

Unitech paid Rs. 1,651 crore to get the licence. In October 2008, it sold 67.5 percent of its telecom venture to Norwegian firm Telenor for Rs. 6,120 crore. This was a huge profit for a company that had not yet started services. The inference was that the telecom minister A. Raja sold the licences in a hurry and at a loss.
This time, the Department of Telecommunication is extra cautious. Its proposed auction of electromagnetic frequency for providing 3G services is coming at a very high price. In all likelihood, big companies are likely to bid up the price and enter the business with a high cost base. But will they be able to make enough money to justify the licence price?
Technology will be just one of their problems. In April 2008, mobile giant Ericsson unveiled a next generation telecom platform. Known as LTE (long term evolution), the new technology could replace the existing 3G standards and the products are expected to hit the market by 2010. Other technoloigies such as enhanced 3G and WiMAX are coming too. If these technologies gain better traction than 3G, the licensees could be burnt. 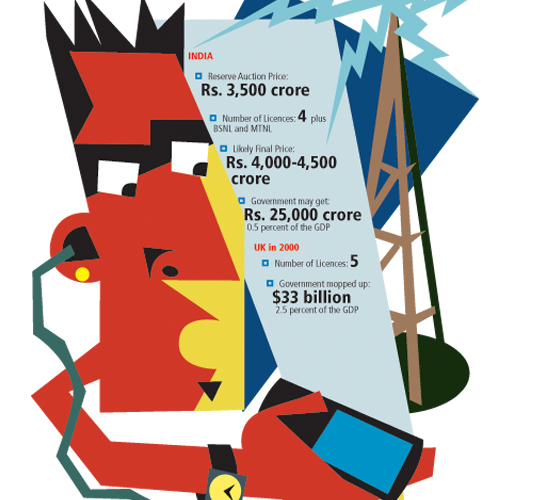 Former chief of the Telecom regulatory Authority of India, Pradip Baijal, questions the reserve price. He asks if data services account for only 10 percent of the revenue of an Indian telecom company, what is the point in pricing the 3G auctions substantially above voice licences?
The most successful 3G auction worldwide was in the UK in 2000, when telecom companies bid 22.5 billion pounds for five licences. But despite the high price, UK companies have not been able to launch enough services to utilise all spectrum and make profits out of their early investment. UK continues to remain a laggard in offtake of 3G services even today.
Telecom specialist Arpita Pal Agrawal of PricewaterhouseCoopers says the Indian auction will see good bidding because spectrum is a controlled commodity in the country and thus scarce. Launching 3G services will not be their main reason.
Baijal says the promise of increased valuation will provoke the new licencees to play up their bids just to get some spectrum to start business. “As the auctions comes at the end of 3G’s lifecycle, if companies dither making investments in upgrading their network, the Indian consumer will be the biggest loser.”

Tweets by @forbes_india
Towards A More Natural Price
A Mixed Legacy