Towards A More Natural Price

Freeing natural gas prices might raise some concerns, but will help in building an energy-efficient economy

What oil was for the 20th century, natural gas will be for the 21st century. These are the words of Vijay Kelkar, chairman of the 13th Finance Commission and a former petroleum secretary. This sums up the reason why India wants to move to a gas-based economy, a cleaner fuel that has been gaining share the world over. But there’s one hurdle to that transformation: Producers here can’t sell gas at a price determined by the market.

Kelkar suggests changing this. At present, bulk of the natural gas in India (about 55 million units out of the total supply of 74 units) is sold at government-administered prices. While the price set for Reliance KG-D6 is higher at $4.2 per million units than the controlled price of $2.5 to $3.5. Current prices in the US (Henry hub) range from $2 to $3, while those in Asia (Japan) range between $6 and $7.
Kelkar’s suggestion is to free pricing of gas. The long-term benefit of this would be to allow the formation of a vibrant Indian gas market, based on domestic natural gas as well as imported Liquified Natural Gas (LNG). A proper price discovery, like in markets in Europe and the United States would have to be supported by an increase in pipeline infrastructure. Price decontrol could cause some pain for the power and fertiliser industries, that use up two-thirds of all the gas produced in the country. 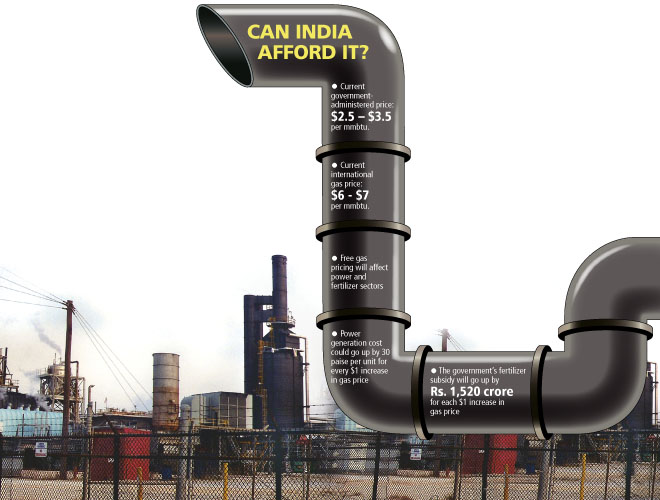 Power producers will shift to cheaper fuels like coal for setting up new capacities. The existing ones using gas will shift to Naptha.
Where substitution does’nt happen, power prices are likely to go up. Deepak Mahurkar, associate director at PricewaterhouseCoopers, feels every dollar increase in gas prices would lead to an increase in 30 paisa per unit in the generation costs”. So assuming gas prices double to $6 or $7 per unit then it would easily result in the costs going up by about 90 paise per unit.
With the same price assumption, if the current international prices of gas are factored in, fertiliser prices will increase by 80 percent. However, it is the government that will foot the bill because of its fertiliser subsidy scheme. The subsidy burden on the government will increase by Rs. 1,520 crore for every $1 increase in gas prices, says Mahurkar. However, reimbursements are often delayed, impacting the firm’s working capital management.
But the eventual price of gas is difficult to predict since it is not well commoditised or widely traded like crude oil. Moreover, gas is mostly traded on long-term contracts and not on a daily basis. But the really big impact will be on the development of the gas market in India and the fillip that exploration activity will receive. The investor confidence will go up with the expectation of a price raise. Lastly, as 100 percent foreign direct investment is allowed in this sector, freeing of prices could attract many foreign investments. But Mahurkar thinks this may not readily happen in the present environment.

Tweets by @forbes_india
My Munster
Risking a Missed Call