Letter From The Deputy Editor: Making Learning Simple and Fun

It wouldn't be surprising if a large percentage of Sal Khan's video tutorials on subjects that run the entire gamut from basic addition to the economic concept of Fiscal Cliff are seen by Indians. He has a small section devoted to solving IIT-JEE problems as well!

There are many ways to measure one’s life. And I mean measure in a literal sense. You could measure it in birthdays, anniversaries or promotions. You could, like TS Eliot’s Prufrock, do it in coffee spoons. There is another way though, albeit unconventional. You can measure it in the number of good teachers you met as your biological clock wound down. These are the people who forever illuminated some part of the jumble that passes off as the universe. 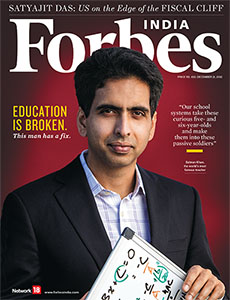 I remember Paula Ghosh, without whom I would have never learnt to love English. Then there was Mr Pattarkine—I never dared ask his first name—without whom integral calculus would have been all Greek. Electromagnetic waves would have been all harmful radiation if Ms Megha Kolhekar hadn’t come along.  As good a teacher these people may have been, I found a better one a few years ago. While trying to explain to my daughter the concept of addition and subtraction, I discovered a video on the number line made by someone called Salman Khan. (Not Biceps and “Commitment” Salman Khan.) My daughter’s math improved and she won’t forget “Sal Khan Uncle”. Khan’s videos were everything learning ought to be: Simple and fun.

It wouldn’t be surprising if a large percentage of Sal Khan’s video tutorials on subjects that run the entire gamut from basic addition to the economic concept of Fiscal Cliff are seen by Indians. Actually, a lot of Indian students must be viewing Khan’s videos because he has a small section devoted to solving IIT-JEE problems as well!

It was a pleasant surprise then to see our US edition put Salman Khan, the internet celebrity teacher, on the cover. Since many of us in Forbes India feel very strongly about education and how children can be made to learn better, we decided to buff up the US offering with our own efforts. We have a totally new and extensive interview of Khan. We also have Karan Khemka and his team at Parthenon writing about how the tryst with educational technology has worked for schools.

There is more to Forbes India in this issue than education though. We have a very insightful story on how Indian Railways is using lessons from cognitive neuroscience to reduce deaths at unmanned level crossings. And we have the redoubtable Satyajit Das writing about why the US needs to do more than what the Fiscal Cliff measures demand. Those of you in Mumbai and Delhi will like the piece in the Life section that marks the fifth anniversary of Blue Frog, the venue that propelled the independent music scene in the country.