Letter From The Editor: Inside Modi's Gujarat

The fundamental underpinning of Modi's Gujarat needs far deeper examination, before we can even assume that its model of governance is indeed sustainable

India is in a state of flux. Its institutions need urgent repair. Its bureaucracy has been lulled into inaction as more reports of corruption, which has eaten into the innards of governments at the Centre as well as in the states, come to light. The parliamentary logjam is threatening to derail governance. There is an increasingly growing section of society which believes that we need decisive leadership at the top, more than anything, to break through this period of stasis. And they invariably point to chief minister Narendra Modi’s so-called economic miracle in the state of Gujarat as an example of how strong leadership can bring about an economic and social transformation. 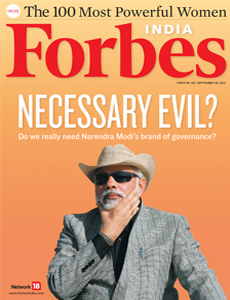 By now, it is amply clear that Modi will play a critical role in the run-up to the General Elections in 2014. The Congress Party is completely on the back foot, unable to manoeuvre itself without landing flat on its face every other month. The way things are, even die-hard Congressmen aren’t predicting anything more than 60 seats, if elections were to be held now. If the ruling Congress Party is completely routed, it won’t be a cakewalk for BJP to form a stable government, even if it emerges as the single largest party with say, a maximum of 150 seats, unless it can cobble together enough allies who can take it past the half-way mark.

This much is clear. But who should be the prime ministerial candidate, if the BJP-led National Democratic Alliance were to come to power? Although he hasn’t expressed his interest publicly, Modi is pulling out all stops to score a huge victory in the state elections in December. Whether he will use it as a platform to jump to the national stage isn’t yet clear. But if he does, the biggest weapon at his disposal will be his brand of efficient and effective governance, which has won him kudos from all quarters. Big Business can’t stop praising him for his vision and also for doing everything in his power to bring large industrial projects to the state. Local entrepreneurs say they are able to directly write to him, if they run into any bureaucratic red tape. Citizens praise him for the quality of infrastructure he’s built in the city of Ahmedabad and elsewhere.

But that’s perhaps just one side of the story. I believe that the fundamental underpinning of Modi’s Gujarat needs far deeper examination, before we can even assume that its model of governance is indeed sustainable. This is especially true given Modi’s autocratic style of leadership that brooks no opposition. That’s why my colleague and Senior Editor Dinesh Narayanan’s cover story is significant. For the past several weeks, he’s met scores of politicians, common people, businessmen and bureaucrats both in and outside the state to present a balanced view of Modi’s Gujarat. We do hope it stokes a more well-informed debate on the nature of leadership, government and society we really need in our country.

Correction: This article has been updated with a correction. Ahmedabad is not the capital of Gujarat as stated earlier.

Tweets by @forbes_india
Indian Airspace Suffers From Supply Demand Imbalance
In FMCG, Product is Hero; in Media, Content is King