The Rise of Asia

The sense of uncertainty that's gripped the entire Western world was palpable. In contrast, you could feel the quiet confidence every time you shook hands with the tycoons from China, Indonesia, Taiwan and India

Last week, I was away at the Forbes Global CEO Conference in Kuala Lumpur. Attended by 400 leading entrepreneurs and thought leaders from around the world, it was a veritable intellectual feast for the mind. If one needed a reaffirmation that the balance of power was shifting to Asia, this was one such occasion. The sense of uncertainty that’s gripped the entire Western world, particularly the crisis facing the Eurozone, was palpable in the formal panel discussions. In contrast, you could feel the buoyancy and the quiet confidence every time you shook hands with the tycoons from China, Indonesia, Taiwan, Singapore, and of course, India at the formal sit-down lunches and dinners over the two-and-a-half days of the conference. 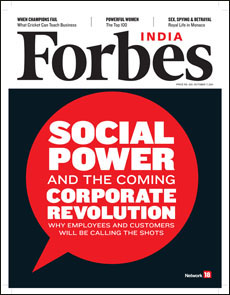 Capitalism is alive and kicking across Asia. I met Asian entrepreneurs who had made billions from healthcare, real estate and construction, media and the consumer sector. There were many smart minds there, including the co-founder of Facebook, the mild-mannered Eduardo Saverin, who sat through most of the sessions. William Adamopoulos, the president and publisher of Forbes Asia and the man who brought the conference to Asia for the first time in 2001, days after the 9/11 attacks, told me that the collective net worth inside the Grand Ballroom at the Shangri-la hotel, where the conference was held, was close to $115 billion.

Back home, the countdown to the Forbes India Leadership Awards, one of our biggest showpiece events, has begun. Preparations are on in full swing to make October 21 a night to remember at The Trident in Mumbai. On page 94 of this edition, you’ll get a sneak peek into the list of outstanding entrepreneurs, who are in contention for the various awards.

Tweets by @forbes_india
What Has Happened To The Labor Market In The Great Recession?
What Business Can Learn From Cricket