Irrfan Khan resists being labelled. It is limiting, says the actor, whose search for more meaningful roles continues despite the overwhelming affirmation from critics and audiences alike 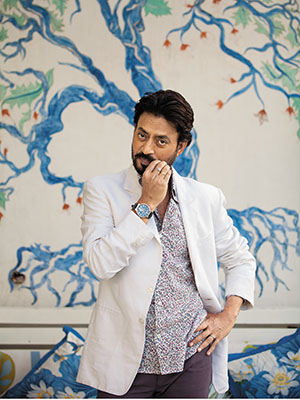 Away from the hustle and bustle of mainland Mumbai rests a quiet stretch of land dotted with leafy palm trees that sway in the winter breeze and monstrous old buildings that are being renovated into hotels, resorts or residential complexes. Called Madh Island, the area is not only far but also far removed from B-town’s usual cacophony. Its famous resident, Irrfan Khan, is looking for just that.

Cut off from what he calls the corrupting influence of “a movie-city like Bombay” on an artist, Irrfan, 46, inhabits—and defines—a world of his own, just like in his movies. Dressed impeccably in a white blazer and slim-fit grey trousers, beard trimmed to perfection, hands gently rolling a cigarette—something he “got hooked on” at the National School of Drama (NSD)—he settles down for a chat with Forbes India.

The tranquility of the place is unmistakable and Irrfan’s husky-voiced intensity rips through it as he dwells on his craft, the soul-wrenching efforts that go into his effortless performances, and his never-ending quest for contentment as an actor. “What  I am looking for still eludes me,” he says. Even after a  host of unforgettable films, wide recognition and  multiple accolades, he is looking for “stories that can really engage me” and “take me forward”.

The cause of this lack of fulfillment, he says, “is a continuous struggle to find my kind of story… such a story where I have a great experience and give the audience a great experience. And for that you need a storyteller.” Is there a dearth of storytellers who can fascinate an artist of his calibre? “There are many promising new directors but it is time they were more ambitious and started telling stories that have resonance all over the world,” he says.

It is this need for a “universal” brand of cinema that he has stressed upon in his visits to a gamut of film festivals this year, including the prestigious event at Cannes where he was hailed for his compelling performance in The Lunchbox. He reckons Indian audiences are evolving and “they need different kinds of films and experiences”.

He wears the acclaim of The Lunchbox on his sleeve. “It is the first Indian film that was released like an English film [in terms of scale] across the world,” says Irrfan, who was a co-producer. But as an actor, not playing his age was “a tedious process”.

“To look like that, to think about it, how to age myself, I don’t sleep, I booze, I do this, I do that… you don’t want to do that thing [and] be in that zone,” he says. This isn’t the first time he has played an old man—and felt unpleasant about it.

In 2011, for the HBO series In Treatment, he played a widower paralysed by the grief of losing his wife and at the same time battling pangs of cultural displacement when his family brings him to the US for treatment. Irrfan says, “It was very difficult. I haven’t faced that kind of complexity in my life. I didn’t know from where I would bring that experience of pain.”

In 2006, in Mira Nair’s sublime celluloid adaptation of Jhumpa Lahiri’s Pulitzer Prize-winning novel The Namesake—a film that established him as an actor of repute in the Western world—he played a professor who ages from a reticent young fellow to an unobtrusive old man. “I never enjoyed that phase… playing that age and feeling that age in your body when your agility is challenged. I hated it,” he says.

The actor has often felt “stifled” by the intense process of acting. “Earlier I used to look for a method. At NSD, they asked you to find a posture which would lead you to the emotion of a scene. It was among the various techniques they taught. But I could never connect to that,” he says.

He kept looking for triggers that allowed him to slide into a character and experience all its emotions to the fullest. He cites the example of Maqbool (2003), Vishal Bhardwaj’s adaptation of Macbeth and one of Irrfan’s most memorable films. “During that scene where Tabu is lying dead, something happens to me when I suddenly realise that this woman has brought me till here and she has left… she is gone!” he says. “I was going through grief as an actor. And because you are creating that grief, you start enjoying being in that state.”

In another Bhardwaj film, 7 Khoon Maaf (2011), Irrfan plays an effeminate poet by day who turns into a wife-assaulting beast by night. He struggled to determine the “emotional core” of the character. “I kept asking Vishal ki isme kya hai? [what is in it?]” he says. Right before a shot one night, he heard an Abida Parveen ghazal that helped him “find the contradictions, complexities and compulsions” of the man. “There was no connection between the ghazal and the character. It was just a trigger,” he says.

Rarely does one come across an actor who analyses his craft so scientifically and manages to deconstruct the process so convincingly. Time magazine puts it aptly in a 2012 essay: “By eschewing Bollywood frivolity and focusing on his craft, Irrfan Khan has won the right to be considered the finest Indian actor of his generation.”

Irrfan says he only attempts to give the character “a proper culmination and appeal”. But some roles are already complete like the one in Paan Singh Tomar, a film that won him the National Award last year. “For certain roles, you have to grow and find the character. But when Tigmanshu Dhulia [the director] narrated Paan Singh Tomar to me, it was just there. He was standing in front of me,” he says.

He finds it most rewarding when audiences are overwhelmed by his performances. “The way the audience relates to your work and the way it stays with them is the most precious thing. That is the reason you are an actor,” he says.

But the fiercely self-analytical actor is irked when audiences praise him for a role in which he “felt nothing”. He says, “Sometimes people love your performance but you know that you never experienced anything. What is it they like so much?”

He also has an aversion to epithets even if that is of a “fabulous actor”. He feels “caged” by tags. He says, “The industry is eager to put you in an image so that they can use you. They want to define you as soon as possible. I feel claustrophobic when any definition is put on me.”

Nonetheless, unfettered praise has marked Irrfan’s journey. Oscar-winning director Ang Lee called him a “unique actor” after Life of Pi. Danny Boyle, who directed Slumdog Millionaire, said he is “beautiful to watch” and compared him with an athlete who could execute the same move perfectly over and over again. Legendary film critic Roger Ebert termed his work “subtle” and “engrossing”. Amitabh Bachchan called him an “incredible performer” in Paan Singh Tomar.

Today I don’t need to communicate to the industry that I can engage,” says Irrfan with a sense of pride. But the restless actor can’t wait for more “engaging scripts”. He has turned producer to play an active role in a transitioning industry. “I don’t want to keep waiting for good stories. If I see a possibility of making an engaging film, I would rather take charge and make my own,” he says.

Will he direct too in the near or distant future? “When I watch cinema what attracts me is people’s behaviour more than the story. My natural inclination is towards acting. I can’t direct,” he says.

His latest film Qissa, a “hard-hitting” Partition tale, was screened at the recently concluded Abu Dhabi Film Festival and Irrfan is quite upbeat about it. “This film has Indian, German, French and Dutch producers. So it gives us a kind of visibility in the European market,” he says.

While sections of the media are quick to anoint him the first truly “crossover” Indian actor who has found favour with influential Hollywood studios, Irrfan is keen to work with the new crop of desi directors who are making waves with non-formula films. “Dibakar Banerjee, Shoojit Sircar, Shimit Amin, Sujoy Ghosh, Sriram Raghavan… they are all promising. They just need to find their ground and their stories,” he says.

For an actor who is eternally hungry and hunting for “something beyond”, the sky is the limit. Perhaps Irrfan Khan won’t settle for even that.