Few filmmakers have captured contemporary India quite like Zoya Akhtar, who has made the genre her own 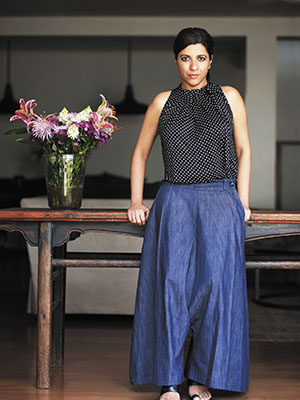 “Recently someone told me, ‘I heard you are really good on set… you are like a guy’,” Zoya Akhtar recalls with an eyeroll. Now this could just have easily been one of the many sexist comments that Dil Dhadakne Do’s Kamal Mehra (played by Anil Kapoor) makes to his daughter Ayesha (played by Priyanka Chopra). In the film, Ayesha is denied her legitimate entrepreneurial bequest by her tycoon parents because businesses, after all, are to be inherited by sons.

On the surface, Dil Dhadakne Do is about a dysfunctional family on a cruise, but through the film, Zoya maintains a deceptively easy-going focus on gender issues. Consider that Ayesha’s father brushes off her being listed as one of Forbes’s Top 10 Entrepreneurs by saying ‘next year it will be my son’s name in the magazine’. In another scene, her husband Manav (played by Rahul Bose) says his family is progressive because he allows Ayesha to work.

Though Zoya captures these nuances with trademark finesse, the concept of gender discrimination was so alien to her when she first started working in the Hindi film industry as an assistant director that she didn’t even notice it. However, she does remember an incident from the set of her directorial debut Luck By Chance (2009). “A Steadicam operator, who had worked with Farhan [Zoya’s younger brother and actor-director] before, kept turning to him for instructions. We were sitting together behind the monitor and he would look at Farhan for approval.” Zoya took the operator aside and told him, ‘I am the director of the film’ to which he said, ‘No, no, you are like my sister’. “I told him, ‘No, I am not your sister. I am your director. You have to be able to handle that. Can you?’ He said he could and we worked again after that film.”

Two mega hits (Zindagi Na Milegi Dobara, 2011, and Dil Dhadakne Do, 2015) later, it is unlikely that Zoya Akhtar has to assert her authority on her sets. Indisputably among Bollywood’s most successful directors (with two of her films becoming box office blockbusters), she doesn’t make the 2015 Forbes India Celebrity List because she is selective about her work and absent from social media.

The times she does venture there, Zoya still finds evidence of everyday sexism, but from the audience rather than the industry. “If I do a video interview with a male director, the YouTube comments will mostly be about how weird I look or what I am wearing. It’s annoying. It’s like saying that at the end of the day, you are just a chick so you will be judged on your looks. Your work doesn’t matter.”

The recent Jennifer Lawrence essay on Lena Dunham’s newsletter Lenny about Hollywood, sexism and gender pay inequality resonated with Zoya. In the pointed essay, the actress wrote, “I’m over trying to find the ‘adorable’ way to state my opinion and still be likeable.”

“You are constantly apologising for doing your work properly. You wonder if you are demanding too much or pushing too much,” says Zoya. “Guys who are half the filmmakers that I am feel entitled to it. Actresses have it worse. At least, I would get paid as much as a male director.”

Happily, in recent times, actresses have started speaking up about equal pay even in Bollywood. “I am glad they are speaking up because we have some incredible actresses here. Priyanka [Chopra], Deepika [Padukone] and Kangana [Ranaut] are powerhouses and people come into theatres to watch them. They should be given their due.”

Zoya, her cousin Farah Khan and collaborating partner Reema Kagti are the only female voices in the much-touted Rs 100 crore club (box office collections) in Bollywood. Just with four films—including Bombay Talkies (she directed a segment of the 2013 omnibus to celebrate the centenary year of Hindi cinema)—Zoya has established her very distinct voice. “As a filmmaker, you have to put yourself out there. Your film is a reflection of your politics and value system.”

And Zoya has a very refreshing voice, says close friend Reema Kagti. “The common thread through all her films has been that she’s picked a setting or story that is normal and turned it on its head. There have been many films on the film industry, bromance or road trips and family dramas, but she has a different perspective.”

Both Dil Dhadakne Do and Zindagi Na Milegi Dobara offered a look into the inner lives of the rich and privileged. Born into one of Hindi film industry’s most prestigious families, it’s not surprising that Zoya knows that world well. But questions about the socio-economic strata she sets her films in exasperate the 43-year-old director. “Of the four films I have made, two were not in that strata. My films are about rich people, not for them. Slumdog Millionaire is a film about people in the slums but it’s not for them. Two of my popular films are based in this milieu but they are popular because that’s what the audience was interested in watching,” she says. “Thematically, I think my films reflect contemporary India. There is gender disparity in families across cities and economic strata. Similarly [themes like], bromance or how people deal with each other and analyse their lives, which is what Zindagi... was about, only reflect urban India.”

Another thread stringing together her last two feature length films is Zoya’s love for travel. “I try to go to a new country at least once every year. There is so much to see in the world. It really opens your mind up. It makes you come out of the little hole you are in where you think that your problems and the Hindi film industry is everything. I love food, seeing new places and trying new things,” she says between sips of green tea. Travelogues, guide books and souvenirs stacked on the shelves of her sea-facing Bandra home are testament to the wanderlust in her.

“I have driven across most of India with my friends: The Northeast, from Bengaluru to Hampi and Manali to Ladakh; I have done lots of driving in India and it is stunning. I have also done road trips in Australia and America. There is certain magic in a road trip. Every time you go on a long road trip, you come out slightly tweaked. This is why I always thought I wanted to make a movie around a road trip.”

With Dil Dhadakne Do, the idea went beyond the travel. “Reema and I wanted the family to come together for a reason. It was boring to do a wedding or a death.” That’s when they decided to stick the family together on a cruise ship. “We thought that would be metaphoric for the family.”

The Mehras of Dil Dhadakne Do might not be able to work together but the Akhtars are a very tightknit group. Javed Akhtar is a part of all the films his children Zoya and Farhan have made. “Zoya is very crystal clear in what she wants for a scene. This makes my job both very easy and tough. Even when she wants to change something, it’s not on a whim. She has very clear reasons for why something is not working,” says Javed Akhtar about working with his daughter as lyricist and dialogue writer.

Zoya has also worked very closely with Farhan through their careers. “I have collaborated with Farhan in every capacity. We have been co-directors. I have been his executive producer, casting director, assistant director and director. We are very different as people but we have a similar ethic and aesthetic taste.”

Growing up in a world where hanging out on the film set was the norm, where Amitabh Bachchan mouthed lines her father wrote and she was baking cakes with Karan Johar and Shweta Bachchan, it might seem natural that movies are an integral part of Zoya’s life. But that wasn’t the plan. “Growing up, I obviously loved the movies but I wasn’t sure if I wanted to make them because the ’80s were so bad. I thought maybe I’ll go into advertising.” So, while she was still studying at St Xavier’s College, Zoya started working at adman Adi Pocha’s Script Shop. Watching Salaam Bombay! changed the trajectory of her career. At 21, Zoya worked with Mira Nair on Kama Sutra: A Tale of Love before heading to New York University (NYU) for an advanced diploma course in filmmaking. “Once I came back from NYU, I was ready to make my first film.”

Zoya wanted to make Luck By Chance, a film about the film industry, and at the centre of it was Vikram, a small town boy who dreams of stardom. This script did the rounds for a long time. “The film’s lead was a manipulative son of a b***h. No one wanted to pay that part. It had the film industry as a backdrop so it also needed a certain canvas—it wasn’t going to be a cheap film. I had money and the script but I didn’t have an actor.” Zoya finally cast her brother. Though the film didn’t set the box office on fire, it established her as a filmmaker to reckon with. And certainly not just ‘like a guy’.

Tweets by @forbes_india
Mahesh Babu: When heroes get real
Songs and their enduring appeal