The grit, the ideas and the spark in the 2017 Forbes India 30 Under 30 list are signs that not all is wrong with the world 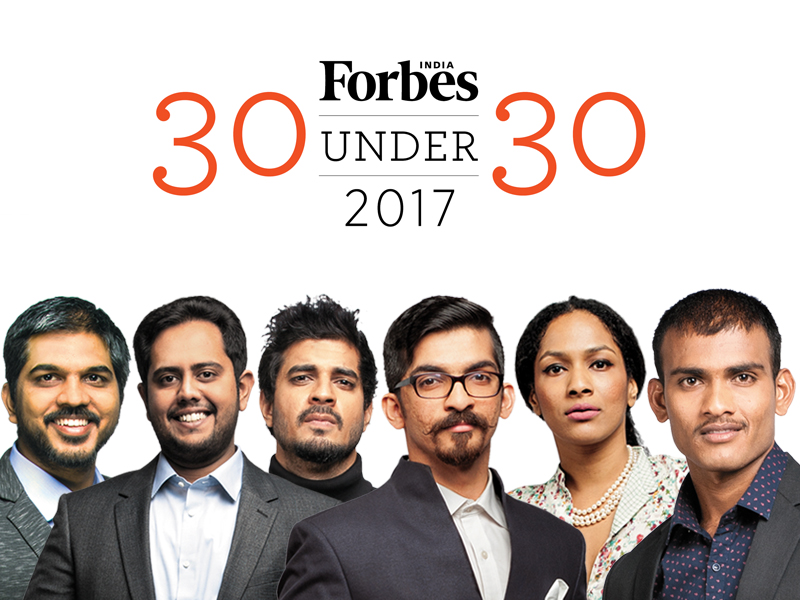 CLICK HERE TO VIEW THE FULL 30 UNDER 30 LIST
Happy news isn’t easy to come by these days. The headlines, for the most part, report or predict doom and gloom. Throw a stone and you’re likely to hit a fascist or a defeatist.

We were looking for shiny, hopeful people. So we didn’t throw stones. Instead, we spread the word. Gently at first, and increasingly with greater vigour. It took us a few months, but we found more than we expected: The many members of the bright, young, optimistic cross-section of the country for whom the glass is half full. And with good reason.

The men and women you’ll meet in the 2017 Forbes India 30 Under 30 list are, simply put, refreshing. And real. They have purpose, grit and, often, charm.

Also, they are worthy additions to Forbes India’s stellar 30 Under 30 alumni which counts Ola’s Bhavish Aggarwal, actor Sushant Singh Rajput, Practo’s Shashank ND and Abhinav Lal among its many noteworthies.

CLICK HERE TO VIEW THE FULL 30 UNDER 30 LIST
They form, as always, a diverse set, selected across 14 categories. It is important to note that it is never an exhaustive list, given the geographical spread. But it is representative.

The broad parameters for selection: Extent of disruption created by the nominees, whether they are self-made (not enabled by legacy) and if they aren’t already well-established. The criteria automatically rule out next-generation entrepreneurs and the leading lights of, say, Bollywood and sports.

Instead, it brings the focus on people like Dattu Bhokanal, the 25-year-old who was never meant to be a rower, much less India’s most successful one. After his father, a well-digger, passed away, he joined the Indian Army and that is where he found himself an unexpected profession.

Or Arpana Choudhury, 25, who, for almost four years, has been helping pregnant women working in the tea gardens of Sonitpur, Assam, get their maternal rights from the government.

Or Richa Singh and Puneet Manuja, both 29, who are offering help to mental health patients through their platform YourDOST.

Or designer Malav Sanghavi, 27, who has used his product design capabilities to create a low-cost incubator; actor Tahir Raj Bhasin, 29, who isn’t sacrificing acting for stardom, and Shiva Nallaperumal, 24, who is bringing India on to the font design map to great effect.

These are the agents of hope in a climate of general discontent. They are the good news we seek.

Forbes India - Forbes India has released its much-awaited... | Facebook
Methodology
The research process was three-fold: One, interviews by Forbes India staffers with sources across relevant categories as well as through studies of databases and media coverage. Two, on forbesindia.com, inviting applications from, or nominations of, entrepreneurs and professionals who fit the criteria. Three, spreading the word on social media. This helped us arrive at a longlist of over 300 names across 14 categories. The next step was narrowing down to a ‘short long’ list—the names most likely to make it to the top 30. This pool of around 100-odd names was decided in consultation with experts. The last stage was separating the final 30 from the other contenders. Armed with expert views, the Forbes India editorial team debated, argued and vetoed its way down to the final 30.