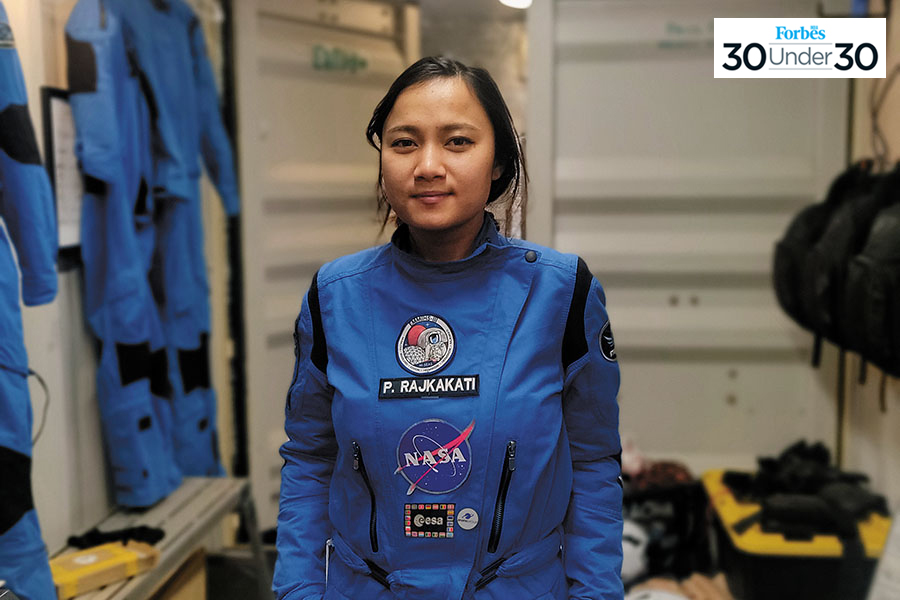 There are multiple high points in Priyanka Das Rajkakati’s career as a space scientist. Among them is being selected to submit her art work to be part of an international Moon Gallery project that aims to send art to the moon via a Lunar lander mission.

Rajkakati’s submission comprises two objects constrained inside a 1cm³ box: A strip of paper with hand-drawn phases of the moon in glow-in-the-dark ink, and a nano-sim card that contains artistic simulations that are coded using Python programming language. Inspired by her Indian roots and Vedic influence, the work is named ‘Bhedadipika — an illustration of Duality’.

“She is drawing inspiration from ancient Indian Vedic scriptures from her own culture on the notion of duality, and playing with her own dual nature as an artist-scientist. Her artwork carries a strong message for the future of space and culture,” professor Bernard Foing, executive director of the International Lunar Exploration Working Group and former chief scientist at the European Space Agency, tells Forbes India via email.

“I made it to the National Institute of Design and then felt that I needed to do science, but when I was studying science the artistic side of me kept coming up,” Rajkakati tells Forbes India from  France, where she moved at 21 to pursue her passion for space exploration. Currently she is waiting to defend her doctoral thesis in the area of global navigation satellite systems.

Another highlight was to be chosen as an ‘analogue astronaut’ and commander-in-training, with a team of scientists studying the effect of being constrained together in a small space for a long time—an important factor to be considered in the case of human space exploration.

While Rajkakati’s academic track record is outstanding, what makes her stand out is beyond that, says Jerome Vila, leader of space rocket maker ArianeWorks, in an email. “Future innovation leaders, who will tackle the challenges of tomorrow (beginning with climate change) won’t be pure ‘hardcore engineers’, but also women and men who have the right qualities to get the best from people surrounding them: Humility, curiosity, tolerance, respect.”

Adds Vila: “She has the ability to be truly herself in everything she undertakes, not trying to mimic others but instead bringing her own genuine personality to work. This will inspire others around her.”

Tweets by @forbesindia
Electric vehicles force carmakers to reinvent the wheel, and brakes, and mirrors ...
Theme park businesses yet to recover from the roller-coaster ride of Covid-19