Becoming Steve Jobs: The Evolution of a Reckless Upstart into a Visionary Leader is worth a read 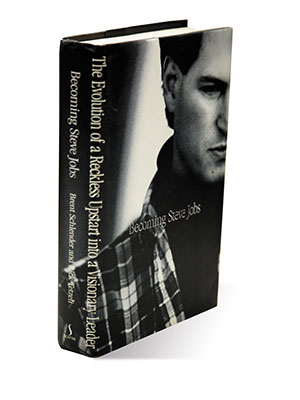 In 2008, Brent Schlender had set up what was to be a dream roundtable: Andy Grove, Bill Gates, Michael Dell and Steve Jobs. Jobs, in fact, had suggested the whole thing, as a better alternative to another idea Schlender had tried to rope him into, as part of a book he was working on then. Coordinating these men’s calendars wasn’t easy, but eventually a date, time and venue had been fixed. And then, a week before the session, Jobs called Schlender to say he wouldn’t be able to make it. He told the author, in confidence, that his health had “really gone downhill”, and that he owed it to his family to take that seriously. If he couldn’t tell the others about Jobs’s advancing cancer, Schlender asked, what should he tell them? Jobs replied, “Just tell them I’m being an a*#hole. That’s what they’ll probably be thinking anyway.”

Jobs was a man well aware of his own legend, for good or for worse. One could possibly say that he revelled in his notoriety. Certainly, much of what has been written about him highlights the negative aspects of his personality, his rages, the way he treated people. And since it was Jobs who turned Apple into what is today the world’s most valuable public company, many make the mistake of assuming that being obnoxious was a necessary quality for success. As Bill Gates says to Schlender, “So many of the people who want to be like Steve have the a*#hole side down. What they’re missing is the genius part.”

What Schlender sets out to do (the book carries Rick Tetzeli’s name as co-author, but it is Schlender’s voice telling the story) is go deeper into the making of the man than other works have done, including Walter Isaacson’s authorised biography which, reports say, is rather unpopular with Jobs’s closest colleagues and friends for capturing more of bad Steve than the good side of him. It is certainly true that if Jobs had been the full-time ogre some accuse him of being, there was no way he would have been able to attract the admiration and loyalty of so many talented people.

Schlender’s relationship with Jobs was a long one: As a journalist, he covered the man for nearly 25 years, they shared backgrounds and were around the same age. While Jobs would introduce him as a friend, and it is clear that there was fondness in the relationship, the boundaries stayed: “I was the reporter, he was the source and subject.”

Becoming… follows Jobs through his early successes, then spends a lot of time on his wilderness years, when he was booted out of Apple. It attempts to draw out the lessons the young maverick learnt at NeXT and Pixar before Apple got him to return and his staggering success in his second stint there. Occasionally one gets the feeling that Schlender cuts his subject a little too much slack. But as much as one can deduce another human being’s life lessons, especially given Jobs’s reluctance to introspect publicly on his past, the book does a commendable job of communicating the essence of Jobs. It is worth a read for any serious student of business.

Tweets by @forbesindia
HUL results: A disappointing set of numbers
Katy Perry: Woman of the world