BMW i8: Care for the Earth, and have fun too

How to zip, zap and zoom, yet stay green 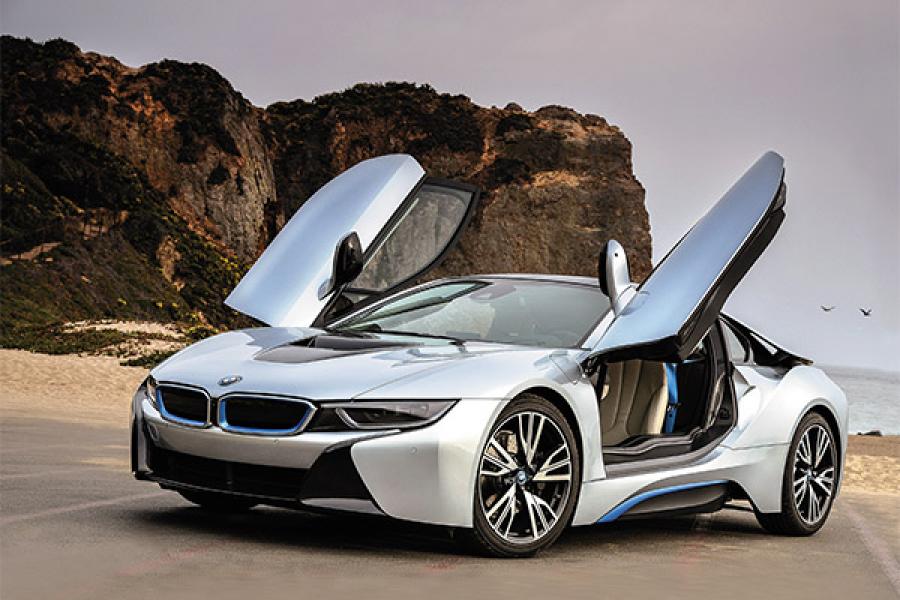 We were rather impressed when BMW decided to attack hybrids and other future power-trained cars by creating a whole new, end-to-end eco-friendly car platform and brand.

For instance, BMW not only has organic leather dyes and organic fibres, but also emphasises that the car is being built at a plant sourcing hydroelectric power. The carbon fibre not only saves weight and raises efficiency, but also makes it possible to deploy the material elsewhere.

Philosophically, what we deeply enjoyed about the i8 was that it revelled in its newness of idea, form and function. Too many cars hide revolutionary ideas so that they don’t startle traditionalists. The i8 flaunts what it has got.

The layered bodywork, the combination of lines and stance is all unfamiliar. The pen has been wielded with great skill because while driving around LA, we couldn’t find another car that could out-swank or out-cool the BMW i8. In this sense, the i8 is what the Prius cannot ever be. The Toyota’s distinctive shape identifies you as someone who cares for the Earth. The i8 says you not only care but you’d also like to have a good time while you are it.

The promise of performance is delivered. BMW uses a brand new 231 PS twin-scroll turbo 1.5-litre three-cylinder engine that drives the rear wheels. Upfront is a 96 KW electric unit that drives the front wheels. The engine sips petrol while the electric motor sips from a lithium-ion battery and can be charged from a power socket at home. The two propulsion units talk to each other via BMW’s new power control electronics.

What this does is give you 37 km of all-electric front-wheel drive range (EU cycle) and a top speed of 120 kmph. But a press of the throttle pedal and you get 4.4 seconds-to-100 kmph capable sports car with all-wheel drive engineered to feel like a rear-wheel drive car.

The car manages 48 kmpl on the EU driving cycle. In the real world, BMW says 20 kmpl or so should be possible. The longer the trip though, the more the petrol engine will have to work, obviously. But still the i8 should consume about half as much gas as any comparable sports car. It is a real world car in other ways too: The batteries are expected to last the life of the car.

As the charge depletes, the car turns on the petrol engine. In normal driving, the engine is a silent player. On switching to sport mode, the petrol engine starts to come out and play. Speakers are used to amplify the engine’s natural sound and pipe it into the cabin. In sport mode, you get great thrust as well as a pleasing baritone roar that accompanies the car as it darts between California’s many corners with incredible pace.

The i8 makes very little sound: At street speeds, it doesn’t even have tyre noise. Any pressure on the accelerator pedal produces a strong thrust that feels absolutely amazing.

Tweets by @forbesindia
The Billion-Dollar Dress: Secret behind Rent the Runway's success
Why Global VCs Are Running Shy