Motorcycles and books are my two great loves and when the two come together, I expect magic. Or at least sunshine and puppies. And that is more or less what happened when I read a 2002 book called She’s A Bad Motorcycle, edited by Geno Zanetti. I’ve no idea who Zanetti is, but he put into the chapters of his book excerpts that gathered up some of the best motorcycle prose, written by writers as well known as Robert M Pirsig, and as sublime as Melissa Holbrook Pierson. I ended up trying to purchase each and every one of the books Zanetti drew upon. And it was a fruitful search, though it remains incomplete; a few are out of print, and others are articles I haven’t managed to trace so far. To this day, I love that book and I’ve lost count of the number of my motorcyclist friends who have received it as their birthday gifts from me. 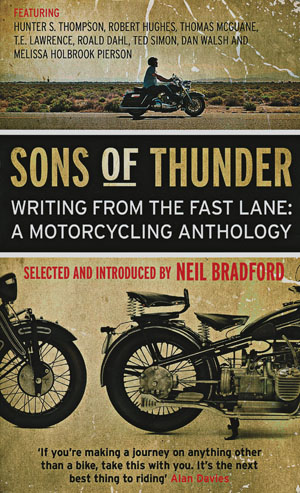 Now, I have just finished reading Neil Bradford’s Sons of Thunder, another anthology. I was, to be childishly frank, super-excited. Could Bradford have created what I deeply desired, ‘She’s An Even Worse Motorcycle’? The sequel, or even better, the ultimate anthology?

Bradford relies on many of the same authors as Zanetti, but his selection is deeply evocative. TE Lawrence as Motorcycleman Ross forms an exquisite opening to the book and the same goes for Pierson as well. (If you like motorcycles, to be honest, buying Pierson’s The Perfect Motorcycle is something you absolutely have to own. Her eloquence and passion is something that all motorcyclists have inside of them, but few have the articulation and pause required to express it in a form others can identify with.)

But where Zanetti’s view was very America-centric, Bradford successfully travels a far, far, wider world, which stretches all the way across the planet, and from the early 20th century up till right now. In each passage or poem, Bradford chooses to focus as much as possible on why we get so emotional about motorcycles and it makes the book positively glow for those of us already in love with our two-wheeled gods. And it turns motorcycles into objects of inspiration and lust for those who haven’t evolved to that state yet. It also stops the book from becoming too technical or too involved with performance or Hell’s Angels.

Bradford uses the literal translation of TE Lawrence’s Aramaic name for his Brough Superior motorcycle as the name for this book.

Packed with tonnes of thunder in its pages, it will make you go out for a ride as soon as possible after you put it down. As for me, I’ve already ordered myself a copy, and am looking at my calendar to see which of my friends has a birthday coming up.