Book Review: The Service of the State

A sneak peek into the world of a typical IAS officer 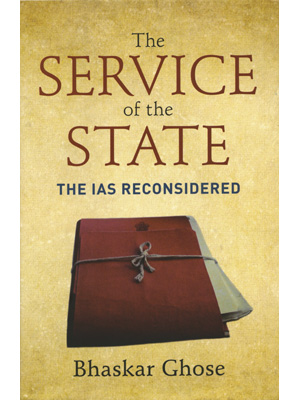 Former secretary to the Government of India Bhaskar Ghose’s latest book comes at a time when there is increasing public anger against politicians and bureaucrats for being corrupt and insensitive. As such, the title of the book and the tagline promised to shed some light on the burning question about the relevance of an IAS officer in today’s India, where inequalities and social unrest are growing faster than the economy.

However, Ghose’s book would largely disappoint readers on that specific count. For the most part, it is a compilation of Ghose’s experiences as an IAS officer between the mid-1960s and the mid-1990s. But, as a memoir, it is a lucidly written account that gives a sneak peek into the world of a typical IAS officer.

Ghose bares his heart by sharing his fears and mistakes as an IAS officer. The book is full of interesting incidents and anecdotes. For  instance, his hilarious findings when Ghose was asked to check how the Censor Board of India went about deciding which scenes were to be deleted from a movie; or the time when he was the district magistrate of Cooch Behar and thousands of people, protesting the non-availability of food grains, were literally about to kill him!

However, it has been a decade since he retired and many of Ghose’s assertions about the service, per se, may not hold true any more since the nature of Indian bureaucracy has changed over the years. For example, Ghose asserts that the sense of camaraderie between IAS officers of the same state cadre is one of the main aspects that distinguish the service. But it is an open secret today that a huge number of bureaucrats, in any given state, are more aligned to different political bosses than to their state cadre. As the years have rolled by, a senior officer helping out a junior IAS, just because they belong to the same cadre, is more of an exception than the rule.

In fact, Ghose’s experiences show the precipitous fall in adherence to such noble conventions in modern day IAS.

A significant amount of space has been devoted to explaining how the IAS is different from the ICS (Indian Civil Service). But references to ICS appear almost anachronistic and serve little purpose in analysing the current problems afflicting the IAS.