The Curse Of Brahma is fast-paced

A stylishly written and fast-paced book, the first installment in the Krishna trilogy 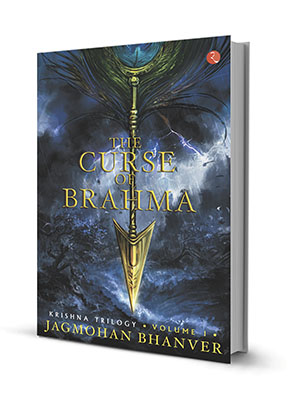 Kansa was never an evil man. He loved his cousin Devaki and fought demons to protect her. But then there was the dark lord who wanted to take control of Mrityulok and Kansa had to become a pawn in the fight between the good and the evil where he eventually leaned towards evil. This meant he had to kill all the children who were born to his beloved sister.

The story behind Krishna’s birth is what makes The Curse of Brahma worth reading. The book is stylishly written and yet fast-paced.

That itself is a rare achievement.

Jagmohan Bhanver has written this book with the modern reader in mind; the language is contemporary and fits well into the mythological tale.

Kansa is never shown to be evil, but as one of those characters who has issues with his father: There is a voice in his head that keeps telling him to question his father about his birth. When he comes to know the truth, he is in a complete state of shock and does what he has to do. Most of us are aware of what he does to Devaki and Vasudeva just to stop Krishna from being born.

But the real story in this tale is about the dark lord, Amartya, Brahma’s favourite disciple, who is cursed and banished from Swarglok. To avenge the unfair treatment meted out to him, Amartya builds an army of asuras who will spread havoc in Mrityulok. Kansa comes into the narrative when Amartya needs his help to ensure that Madhuvan (of which Kansa is prince) is on his side in the war.

The character of Amartya is dark: He goes from being an extremely nice pupil to becoming the evil lord, but there is still some inherent goodness in him that sometimes comes in the way of his evil doings. Bhanver has taken care not only to build on his major characters but also the minor ones, each with their own histories that are tied to the main narrative.

For instance, Amartya’s three monsters from hell are full of character. The Pisaca is a creature with the body of a snake and the head of an octopus; the Kalakanja resembles dried leaves without any blood and flesh; and the third, the Bonora, has one eye and is covered in scales. The only job of these assassins is to behead Devaki. The death of Devaki is the objective of the dark lord and the events in the book revolve around this central theme.

There is a ‘Lord of the Rings’ atmosphere that surrounds the narrative, complete with battle scenes, the politics that plague kings, and the shadows of the dark lord trying to take over the universe. The dark lord is philosophical and intriguing and many a time manages to get the readers’ sympathies, even when his actions are against the supreme gods.

Bhanver is a former banker who left his HSBC job in 2004 to become a writer and a professional executive coach. He set up PeopleFirst, a coaching and consulting firm, and later started the Indian Institute of Finance and Management, an emerging business school.

He has written three non-fiction books; The Curse of Brahma being his first work of fiction, and the first installment in his Krishna trilogy. Bhanver believes we are living in a time when the evil on the planet has really exceeded the good and the only way to save the planet would be by awakening that little bit of Krishna within each of us, if not the whole.