Auto Expo 2016: Carmakers at a crossroads

Despite the frenzy around Auto Expo 2016, automakers are cautiously optimistic given the flat demand and tightening environmental norms 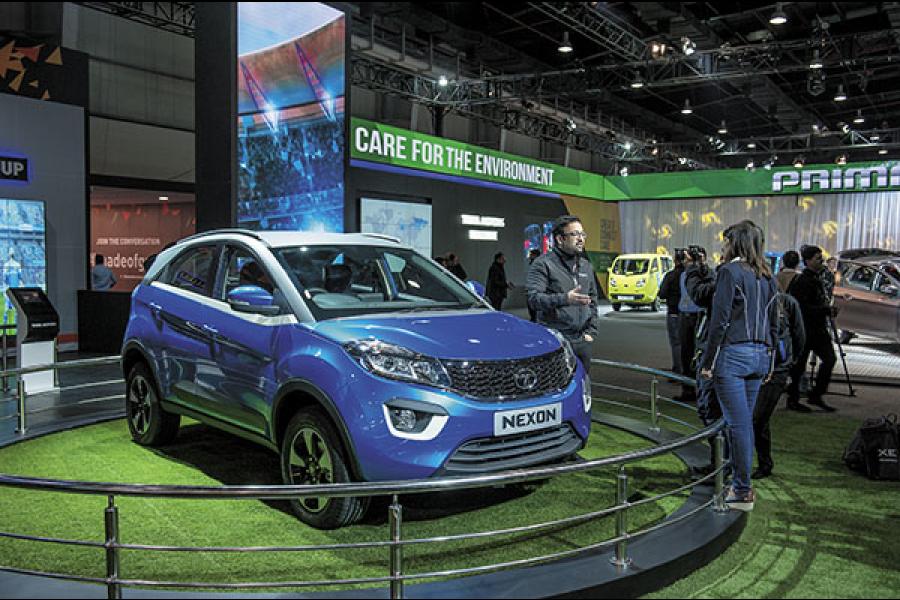 Image: Amit verma
While Auto Expo 2016 had over 6 lakh visitors, greater footfalls might not translate into greater sales

With 108 car and bike launches—from carmakers like Maruti Suzuki, Hyundai, Honda and Tata Motors as well as marquee brands like Audi, BMW, Mercedes-Benz and Jeep—and several recently-introduced automobiles being put on display, Auto Expo 2016, the glitzy biennial exposition held in Greater Noida between February 5 and 9, attracted aficionados across all ages and socio-economic sections.

Enthusiasts made a beeline to see some of the iconic vehicles on display, including American muscle cars like Ford Mustang (recently launched in India), Chevrolet Camaro and models like Wrangler and Grand Cherokee from the SUV brand Jeep, which announced its entry into India at the expo (see box on top launches).

The automobile extravaganza saw some clear trends emerge. SUVs were the flavour of the season, followed by compact sedans and premium hatchbacks, which have always been popular among Indian buyers. While diesel cars had ruled the roost at Auto Expo 2014 due to their superior fuel efficiency and high petrol prices, this year petrol cars have made a comeback riding on cheaper fuel and environmental concerns around diesel-powered vehicles.

“The 13th Auto Expo…seems to have set the stage for a combat in the relatively niche four-wheeler segments, especially compact sedans and SUVs,” states a February report by Religare Institutional Research. “In all, we think four-wheelers will be driven by more novel, energy efficient and competitively-priced new models in 2016.”

Though for Delhiites, the Auto Expo may have been an ideal way to spend a pleasant winter afternoon, the industry is conscious that greater footfalls need not translate into greater sales. The mood of the industry at Auto Expo 2016 may be best described as ‘cautiously optimistic’. Carmakers have figured out that the most effective way of growing sales in the current environment is to keep introducing new models, the strategy that bore fruit in 2015. According to industry estimates, passenger vehicle sales grew around 8 percent in 2015 after declining for two consecutive years.

The growth recorded last year, however, has come at a cost for automakers. Heavy discounts and marketing costs associated with new launches have not helped bottomlines. “The auto sector has been going through a tough phase for a long time. Last year, there was some growth, but that came at a cost as the level of discounts was very high,” says Jnaneshwar Sen, senior vice president, marketing and sales at Honda Cars India. “If you look at January 2016, there was no growth [in car sales] at all. We are hoping this was an aberration.”

In January, carmakers like Maruti Suzuki, Hyundai and Mahindra & Mahindra reported low sales growth, while others like Tata Motors and Honda reported a decline.

Does this mean the industry is moving downhill? Not everyone thinks so. “Demand will gradually pick up,” says Kenichi Ayukawa, MD and CEO of Maruti Suzuki India Ltd. “Product launches will be important to spur demand and carmakers who can offer new products consistently will do well.” Ayukawa adds that Maruti Suzuki’s car sales grew around 13 percent in 2015 and he expects a similar growth in 2016 as well.

Even as the industry is expecting stable, albeit low, growth in car sales, there is the niggling issue of air pollution. Delhi’s dismal air quality has prompted the government to impose a ban on new registrations of diesel cars with an engine capacity above 2,000 cc. Also, the government has decided to leapfrog from BS-IV emission norms to BS-VI by 2020. While the carmakers support the move, the timeline to implement the norms is stiff and will escalate costs, they argue. “Some found it [the timeline] unreasonable, but if that is what the regulation is going to be, then we have to comply,” says Ayukawa. “But we need a reasonable timeframe because we need a special device to attach to the engines. This could be tough to design within a small timeframe while keeping costs low.”

Pawan Goenka, executive director and president of the automotive and farm sector at Mahindra and Mahindra, also has similar concerns. He says that given the tight deadline, carmakers will have to go with the tried and tested technology that they have used to implement Euro-VI emission norms in European markets. This could mean cars becoming considerably more expensive. “According to our estimates, the additional cost of meeting the revised emission norms, with the current prices of components, is around Rs 90,000 per vehicle. Even if our marginal cost declines subsequently when we produce mass volumes, this can go up to Rs 1,10,000 per vehicle after adding excise duty and other taxes,” he says. “On a vehicle that costs Rs 6 lakh, that implies a 20 percent escalation.” According to Ayukawa, the increased cost of compliance may well see small diesel cars, which had become popular, disappear from Indian roads, like they have in some foreign markets.

The outlook for the two-wheeler segment isn’t flattering either. For two-wheelers, the Religare report says, the expo was “largely a non-event”, though some bike manufacturers like Honda Motorcycle and Scooter India, TVS Motor and Hero MotoCorp made some launches and refreshes. Considering that the sentiment isn’t exactly buoyant, some like Bajaj Auto and Harley Davidson gave the expo a skip altogether, citing the high cost of presence.