Bengaluru is achieving what many regions could not: Stanford business school dean 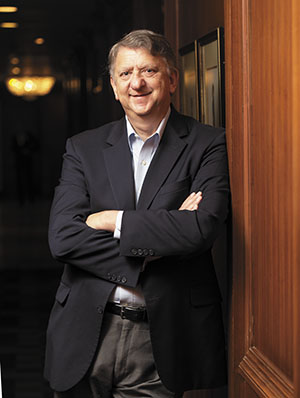 Stanford university’s Stanford Graduate School of Business (GSB) counts numerous Silicon Valley entrepreneurs among its alumni, including Sun Microsystems co-founder Vinod Khosla. In 2013, Stanford GSB launched its Ignite programme for entrepreneurs and innovators, with Infosys’s Bengaluru campus acting as the host facility. Its Dean Garth Saloner was in India recently to explore the possibility of finding a facility host for The Stanford Institute for Innovation in Developing Economies (Stanford Seed). Saloner spoke to Forbes India about the importance of the entrepreneurial process and why Bengaluru has managed to create an enviable startup ecosystem.

Q. How would Stanford Seed work, were it to come to India?
The idea with Seed was to work on poverty alleviation. When you think of poverty alleviation, you don’t think about a business school. When we thought about it, our conclusion was that we wanted to work with existing companies that have the potential to scale. If they could scale, they would provide employment and alleviate their region’s population from poverty. We’ve done that several times in West Africa. The idea is that in the coming months we’ll bring this to South Asia.

Q. Your arrival in Bengaluru was almost in tandem with the e-commerce boom…
I like to say we caused it (laughs). But I wouldn’t go that far. It wasn’t just luck that we came to Bengaluru. We could see the nascent signs of a startup community. The thing about a startup community is that it is multi-faceted. You need a number of elements to come together. At Stanford, at least once a month we have a delegation from some country trying to learn the secret of Silicon Valley’s success and how to replicate it. The problem is there is no easy answer. But one of the hardest elements to replicate is the startup culture. And a big part of the startup culture is the willingness to take risks and, therefore, to fail. What I said about India at the time [in 2012] was that the tipping point comes when you start to see the big successes. When you start to identify young entrepreneurs, and they start to become household names, then people can begin to put in perspective that there is risk, but there is also reward. I think that’s happened here. Bengaluru is achieving something that many regions have not been able to, which is to prove the model that in turn attracts the capital and once the capital is there, it attracts entrepreneurs.

Q. Increasingly, a lot of the focus in business schools is on innovation. Is innovation something that can be taught?
It’s an excellent question: Can you teach entrepreneurship? I think there are some elements of being an entrepreneur which are innate. We can nurture that but not really instil it in somebody. You need to have the taste for risk-taking; you have to have the drive to create something. That I think comes largely with the person. But what you can do is teach the process by which you take that passion from the beginning of an idea all the way through to creating the company. Learning that through experience would be very expensive.

Q. A few months ago, it was reported that Stanford GSB would like its students to graduate before they work on their startups.
We think that as a founder of a small business you’re going to be employing all aspects of general management. So the thing that we impress upon our students is: You’re here to get a general management education. Make sure you get that. As an entrepreneur, you’re gong to need that.

Tweets by @forbesindia
A tightrope walk for Mr Jaitley
Auto Expo 2016: Carmakers at a crossroads