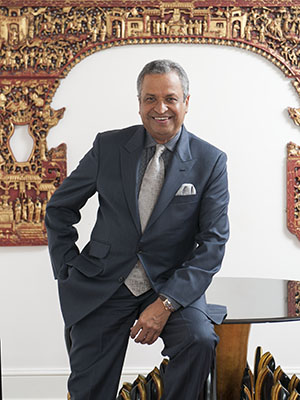 Binod Chaudhary is the only Forbes billionaire from the Himalayan nation

Binod Chaudhary began his entrepreneurial journey with a nightclub called Copper Floor in Kathmandu, Nepal. Today, at 60, he is Nepal’s richest man and the only Forbes billionaire from the Himalayan nation, with a net worth of $1.14 billion (as of April 4, 2016). His CG Corp and Cinnovation have interests in beer, electronics, hotels and even a controlling stake in Nepal’s Nabil Bank.

But perhaps Chaudhary’s best known enterprise is his brand of instant noodles: Wai Wai. His business path has seen him traverse the labyrinthian power structures that have existed in Nepal, both under the monarchy and in subsequent civilian governments. Controversies, therefore, have never been far behind.

In an exclusive interview with Forbes India, Chaudhary talks about his roller-coaster ride as well as his forthcoming autobiography, Making it Big by Binod Chaudhary, to be published by Penguin Random House India. Excerpts:

Q: The book mentions how, in your early years, you ran a nightclub, had long hair and rode bikes. Do you have trouble associating yourself to that today?

Not at all. I take great pleasure in having done what I did back then. I think every young person aspires to go through that phase. But when I look back and see the way I conducted myself then, it gives me a sense of satisfaction because even then, I was responsible and running a profitable business. My fundamentals were very clear. Even in things that I aspired to do, I was still trying to do it right. Just as I was, when I was 10 years old and running a tuck-shop in my school. I made that business profitable too!

Q: An important point in the journey seems to be the realisation that you needed to find someone within the Royal family if you were to continue growing your business.

In Nepal at that time, there was a controlled regime. Many of the members of the Royal family were involved in businesses. They would support people with whom their interests aligned. So I had no choice, but to find an ally. My good friend, the late Prince Dhirendra told me: ‘Look, they won’t let you survive. They’ll be after your life’. He wasn’t being greedy. In order to protect me, he offered a majority stake in a business that I would run with him as a partner. He even signed a paper that confirmed that the money I was investing for his share was a loan. So there were also good souls in the Royal family.

Q: Wai Wai is perhaps the most recognisable part of your group. Back when you began producing it, was it only a question of optimising the use of flour from your flour mills?

Yes, back then I was simply looking to create a product from flour and then I decided on this product. Flying to Bangkok and back, I saw many cases of noodles on the baggage belt and I would ask people: ‘Why are there so many of these cases coming from Thailand?’ They would tell me that people loved them. I think people have grown with the product. To begin with, Wai Wai wasn’t easily available in India. Today we have 20 percent market share in India. Now we’re looking at creating a large national campaign here. We do localised marketing, but this is going to be a big one.

How has the Nepalese economy evolved over the years and has it reached a point where it can enable more people to succeed?

The mindset of the regulators and people has opened up. When I opened the first office abroad in Singapore in 1990, it was around the time when the Maoist problem had started. But that wasn’t the only reason. I also had this inner desire that we need to grow. Why can’t we also build multinationals? Why do we have to be the country where multinational companies come? Why not the other way round? The situation then was unthinkable from a Nepalese perspective, in terms of the laws, the rules and regulations. There were no laws to even define specifically what a non-resident Nepali was. Often when I talk to students, I tell them that sometimes entrepreneurial initiatives of the sort that I undertook can also be termed as madness. If I was cautious and thought too much about the implications, I don’t think I would’ve been able to achieve what I did.