How Deepak Shahdadpuri's bets on the most unlikely ventures paid off 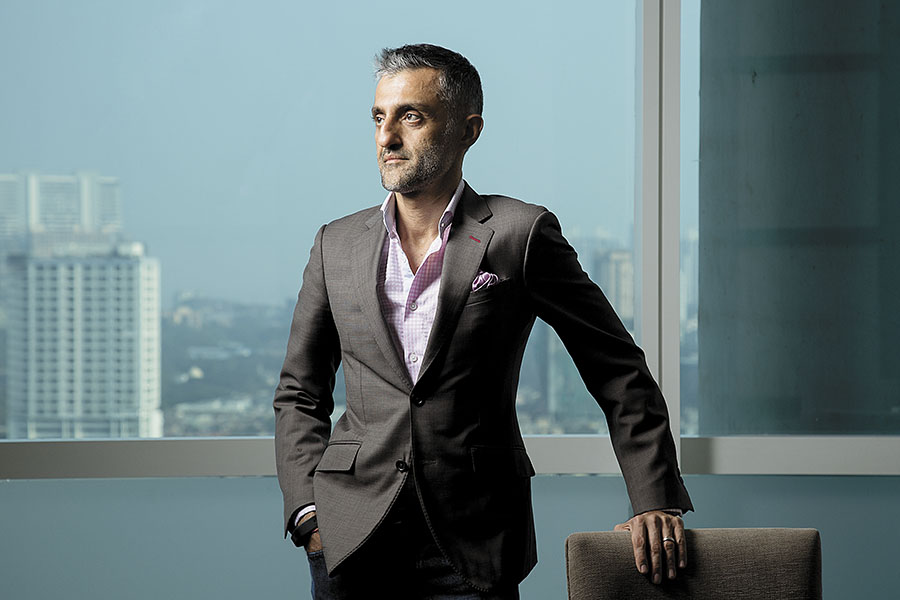 Deepak Shahdadpuri, founder and MD, DSG Consumer Partners. The things he invests in tend to be from fields he’s been passionate about for years
Image: Joshua Navalkar

I’m not a mystic,” is Deepak Shahdadpuri’s usual response to people who ask him how he foretells what companies will succeed. It’s his reply to Forbes India as well. His insights, he adds, come from market research, tracking global trends and keeping his ear to the ground. In the over-decade-and-a-half that he has spent investing primarily in early-stage businesses, Shahdadpuri has made some stellar bets on some ostensibly unlikely ventures. From the pioneering Indian winemaker, Sula Wines, to the hospitality insurgent that is OYO Rooms, Shahdadpuri has made a habit of finding contrarian propositions and betting on them early.

On a late November afternoon, we’re even seated in one of them. Kitchen Garden by Suzette, a farm-to-kitchen concept restaurant, is part of a clutch of outlets that have come up under the ‘Suzette’ banner in Mumbai. And Shahdadpuri, who is the founder and MD of investment firm DSG Consumer Partners (DSGCP), is happy to point out that, early on, to an outsider, Suzette too would have seemed like an odd investment. “They missed French food and Suzette was an experiment,” he says of the founders—Antonia Achache, Jeremie Sabbagh and Pierre Labail. But he saw in it a potential consumer brand. With just a few outlets, Suzette’s expansionary journey has only just begun. Its investor’s journey, however, is perhaps now approaching its prime.

When we met, Shahdadpuri, 47, was in the closing stages of raising funds for his second fund under the DSGCP banner. “We’re at $37 million now,” he says of the $40 million target for the second investment vehicle for his firm. “I’m confident we’ll get there.” (He has.) He has already spent 2016 investing in companies like Hyderabad-based bike rental company Tazzo and RAW Pressery, a cold-pressed juices brand. “DSGCP-2 will be identical to DSGCP-1,” he says. The investments will be made at the same early stage. It will have a portfolio of 20 companies. And $20 million of the $40 million will be reserved for follow-on funding.

Though Shahdadpuri is now synonymous with early-stage investing in Indian consumer brands, when he began in London with Reuters Venture Capital (RVC) fund, he knew little of the Indian landscape. In the early 2000s, when he arrived in India, the Singapore-born Shahdadpuri began to acquaint himself with it. “In those four years at RVC, I began to like India and saw a huge opportunity on the consumer side,” he recalls. “India was coming of age. Potentially great consumer brands were being built by entrepreneurs and they could get virtually no funding.” Banks wouldn’t touch them. Private equity (PE) players wouldn’t invest in them because they were too small, and venture capitalists (VC) in those days did only tech and outsourcing investments, he says.

In 1999, at the wedding celebration of a friend from his alma mater, INSEAD, he met Rajeev Samant, founder of Sula Wines. “We went to Goa for the post-wedding celebrations and found that we both liked house music; we really hit it off,” Samant recalls. Back then, Samant had just begun setting up his winery on a 20-acre plot near Nashik. Shahdadpuri was intrigued. “For the next couple of years, he watched as I made the first batch of wine, and sold it. And a few years later, he became our first VC investor,” says Samant. Shahdadpuri had, by then, left his job at RVC and was managing a fund called GEM India Advisors. Sula, in 2004, was his first investment.

Even then, certain traits were fundamental to Shahdadpuri’s approach as an investor. Primary among them: Being completely invested. “He’s such a genuine guy that from day one, you have the feeling that you’re partners in the venture rather than an investor and an investee,” says Samant. “He’s as emotionally invested as you as an entrepreneur are.” And it shows. It has been nearly 13 years since that investment, and though he has diluted his stake, Shahdadpuri is still invested in Sula and is a director on the board.

Following the Sula investment, Shahdadpuri, through GEM India Advisors, invested in the online travel company, Cleartrip, online art auction platform Saffronart, and frozen bakery and confectionery producer and supplier Bakers Circle. By 2007, he had transitioned from VC to PE, co-founding a fund called Beacon India Private Equity Fund. “I remember always maintaining to Deepak that that was the wrong strategy for him,” says Sameer Sain, co-founder and managing partner of PE major Everstone Capital, who got to know Shahdadpuri when the latter facilitated Everstone’s investment in Sula Wines. “I think Deepak got a bit seduced by larger ticket sizes and investing in more mature businesses. But that was a tough vintage.” Shahdadpuri agrees that the $200 million PE fund was a bad fit. “I found that I didn’t like it. Everything’s competitive, everything’s an auction. That’s no fun for me.”

By 2012, he had moved back to Singapore, and decided he would go back and do early-stage investments. His GEM investments had also turned out very well. The fund had invested $15 million between 2004 and 2006. “By 2012, I had given $32-$33 million back in cash. So, all of my old investors were very happy.” They decided to invest in his new fund. “We set it up as a partnership between Everstone and Deepak. It had Deepak’s identity and his expertise, but Everstone’s institutional net, franchise, reach, capabilities and infrastructure. We also put in a lot of our own capital,” says Everstone’s Sain. And so, in 2013, DSGCP was born.

Shahdadpuri’s focus on consumer brands could mean that he’s mistaken to be someone who’s averse to tech investments. That’s only half true. “I don’t actively go out and look for technology deals. Deals which have a consumer angle find me,” he says.

In the first year of DSGCP, that’s exactly what happened, when a youngster named Ritesh Agarwal first began looking for investors. He tracked down Shahdadpuri on Angel List, a startup database, and contacted him. “Ritesh wanted me to introduce him to people I knew at Expedia,” Shahdadpuri says. Agarwal was also simultaneously speaking with VC fund Lightspeed Venture Partners. “So we got together and agreed on what he should do and gave him the money.”

But before that, Shahdadpuri took his oft-repeated route to investing: “Go in early, sit down with the entrepreneur, think about the thesis, put some money in and build the business.” Their first call was early—7 am, Agarwal recalls. “He asked some pointed questions about the business and was hands-on about getting to understand it better,” says the OYO Rooms founder. “He accompanied me to see OYO Rooms 001 HUDA City Center (our first hotel) in Gurugram to understand how we deliver the experience.” And then, he was in.

Of course, not every investment turns out like that. “Sometimes the business is not working at all. Sometimes the entrepreneur and I disagree about how big it’s going to be,” Shahdadpuri says. “So I tell them: I’m not going to sell my shares. I’ll support you from the outside. But I’m not going to actively engage with the company.”

OYO Rooms hasn’t been DSGCP’s only success. Since 2013, its investees include table booking platform, EazyDiner (which Shahdadpuri has helped create alongside Rohit Dasgupta and Vir Sanghvi), mobile payments firm Mswipe and specialty food ingredients producer Veeba Foods among others.

And there is a pattern to it. “It’s all very good on paper,” says Sain. But the important thing is the individual’s integrity. “I trust Deepak completely. He’s my partner and the best consumer VC investor in India and Southeast Asia.” His greatest skill, says Sain, is his ability to say no quickly to things he doesn’t understand. “I’ve seen this guy say no (to someone) in a meeting, within 15 minutes.”

The things Shahdadpuri does invest in tend to be from fields he’s been passionate about for years. Take food and beverages (F&B), for instance. From full-service restaurants to packaged food products, Shahdadpuri has invested in and been involved in the space from the beginning. “F&B is something he knows instinctively,” says Samant. “He’s been a big foodie who understands his wine. Just like Sula is an extension of my personality, Deepak’s work is an extension of his.”

Though passion may be a primary driver, Shahdadpuri is ever mindful of the risk his work entails, particularly in the aftermath of an apparent slowdown on the Indian investment scene. “In my business, you cannot make money unless you price it in a fair manner. For my planning purposes, I assume for every 10 businesses I fund, three will become zero. Three will break even. Only four will make me money.” Considering this, the way deals were often priced in the recent past was “crazy”. For now, that craziness seems to have abated. And with the announcement of the second fund, Shahdadpuri’s investment work is set to go on overdrive. “The next few years, I’m going to keep my head down and keep investing,” he says, adding, “Hopefully, we’ll generate some exits. And hopefully, I’ll find new entrepreneurs with interesting ideas. Because that’s what excites me the most.”