Celebrity 100: How Sunny Leone evolved into an enviable brand

Former adult film star Sunny Leone has defied conventions and survived as an actor in India for five years. She has also evolved into an enviable brand. And this is just the beginning of her entrepreneurial journey 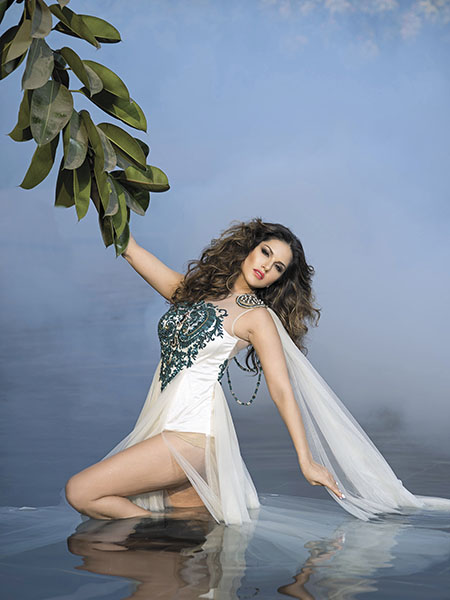 It is late afternoon in November as we stand at the door of Sunny Leone’s sixth-floor apartment in Mumbai’s Juhu suburb. Daniel Weber, her husband, business partner and former adult film co-star, lets us in. He is tall, tattooed and wearing a blue vest with a Peta (People for Ethical Treatment of Animals) insignia. Leone, dressed in a denim skirt and a white blouse, smiles and waves from behind him before stepping forward to introduce herself. “Would you like something to drink?”

It’s quiet, and no aides or publicists are milling around. We pick a spot on a couch across from the TV in the living room, next to a bank of windows. “I know it’s not the Indian way, but we don’t like having help at home,” says Leone, handing over the glass of water before taking a seat at the other end of the sofa.

The 35-year-old Leone is, by some accounts, the most popular celebrity in India. She regularly eclipses some of the biggest names in Bollywood (and occasionally even the prime minister) in the ‘most searched’ lists released by various online search engines. And she was recently named among BBC’s 100 most influential women as well. Thanks to her appearances in films, scores of item songs and reality TV shows, you’d be hard pressed to find someone in the country who hasn’t heard her name. But it is her eventful journey that puts her in a league of her own.

Karenjit Kaur Vohra: An Indo-Canadian girl who changed her name to Sunny Leone to become an adult entertainment star in the US, and having succeeded, left it for a mainstream movie career in India. It’s a compelling story, one which has captivated Indian audiences for half a decade since Leone participated in the fifth season of Bigg Boss, a reality show on Colors. [Colors is owned by Viacom18 and is a part of Network18, the publishers of Forbes India.]

And yet, to limit Leone simply to her status as a unique crossover star is to do injustice to her remarkable successes both within and, especially, beyond films. There is more to the phenomenon that is Sunny Leone than simply the element of surprise. Though, that is how it started out when she and her husband arrived in Mumbai in 2011.

“The plan was to survive in the moment,” says Leone, who was scheduled to be a guest on Bigg Boss. Weber tells Forbes India that he initially planned their travel for just a week. “We did the deal (with Viacom18) from the US. I thought we would probably spend a week over here.” The show’s format was such that one member from the Bigg Boss house would be eliminated every week, depending on the audience votes. “I figured [that if it’s] voters’ choice, I’d be out,” says Leone. That, of course, didn’t happen. Audiences took to her, and she lasted much longer than what Weber and she had expected. While on the show, Leone was offered a movie by filmmaker Mahesh Bhatt. And things snowballed from there, making the overseas star a household name in India.

“I’ve been a brand for 12-13 years before I arrived in Bollywood,” Leone points out. She recalls setting out to do business when she was just 18. “That was the magic number in my head. I wanted to own a business.” She hadn’t figured out the specifics or what it would look like, but she knew that she needed to build it. “It’s not the typical Indian way, and I know that. I definitely heard a lot of different lectures on that growing up. But that’s just who I was.” 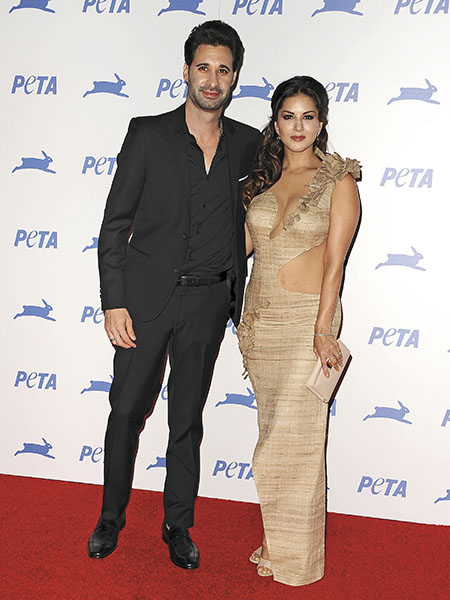 Sunny Leone with her husband Daniel Weber at a Hollywood event in September 2015
Image: getty Images

With this pursuit in mind, Leone familiarised herself with the fundamentals of building a website, editing software, “and all those lovely geeky things that it involves”.

And, though by the late 2000s she was a successful adult film star in her own right (with her own adult entertainment company, Sunlust Pictures), it was her arrival in India that gave impetus to her goal of creating something that lasts.

“You know, when you think of being able to launch a brand or your own line, it’s either not available or it’s a dream too far to reach,” says Leone. “But when we came to India, it became a dream that wasn’t too far to reach.” The line of perfumes, Leone says, is just the first step towards what she believes will be a broader brand that will soon include cosmetics and other beauty and wellness products. For it, Leone and Weber have partnered with the manufacturer and maintained control over the rest of the process, from marketing to distribution, through their own team. She is wary of ceding ground. “We have the capital to do that right now,” says Leone. “So why not keep it small and tight in terms of who has control over it?”

Evidently, she has transitioned from dreamer to entrepreneur.

Chopra, in a review of Leone’s recent film titled One Night Stand, wrote: “In some scenes, Sunny’s face resembles a mask—she’s gorgeous, but nothing moves.” She goes on to add, “I can’t really recommend One Night Stand. But I think we need to acknowledge another marker in the evolution of the Hindi film heroine.”

Leone admits that her journey has been completely different from anyone else’s. But she qualifies it, adding, “You talk to someone and they’ll tell you the same thing. Their journey has been a completely different journey than everyone else’s; every celebrity.” Weber is more emphatic. “I think our journey is extraordinary. Only because I feel that our leap from one place to another is unique in comparison to anyone else.”

This distinction, though, comes with its challenges. Leone has been the target of absurd criticisms by politicians, who have variously blamed her for “increase in rapes”, and causing a “negative impact on the mindset of children”. Her treatment by the press, too, has often had undertones of prurience and derision.

“There have been days when we’ve thought: ‘Oh my god, what’s happening?’” she says. “And it’s not so hard to imagine what those moments could be since they’re all over the news all the time. But there have been a lot of amazing moments too. Like when we met Aamir (Khan)!” The Bollywood heavyweight is one among a legion of her supporters, who strongly backed her after a controversial television interview this year. Says brand consultant Harish Bijoor, “Sunny Leone is the classic example of someone who is able to hold her own confidently and battle it out on issues consistently.”

Importantly, the misogynist hues of criticisms against her put Leone in a position she had found herself in before: At the centre of an impassioned gender debate.

It’s not a position she actively covets. “I just see myself as a girl who wants to work,” she shrugs. The same insouciance is on display when you ask her about the impact that fame has had on her. “I don’t know. I don’t see myself as a famous person,” she says. “I see myself as an awkward person in a big gigantic room with all these famous people, and I want to go into a corner and just drink a glass of wine.”

Her admission, though, contrasts with the scale of her accomplishments. Leone may not see herself as a famous person, but she and her team realise fully well the financial potential of her extant fame.

“I’m a product of social media, I believe. That’s how I grew my fan base to what it was, and when we came here, I knew I had a following in India; I just didn’t know how far that reach would go.” Quite far, it has turned out. Just between Facebook, Twitter and Instagram, Leone has nearly 30 million followers.

Her online following lends itself to the gaming world, which Leone hasn’t shied away from. About a year ago, she struck a deal with Mumbai-based game developer, Gamiana, for a mobile card game called Teen Patti with Sunny Leone. “She is one of the few celebrities in Bollywood that I know of who’s been playing video games for years,” says Vishal Golia, co-founder and CEO of Gamiana.Not long before Leone and Weber first met Golia, the game Kim Kardashian: Hollywood had become a sensation, driven in part by Kardashian’s massive social media following. Gamiana, in collaboration with Leone, went on to build the game, which has been live for nearly a year now and is among the top 10 casino games on the Google Playstore in India.

And while the structure of Leone’s company and brand is still taking shape, Bijoor believes they’re being built on a strong foundation. “There are persona-driven brands that have used controversy to establish themselves in India, but they haven’t clicked the way she has.” The key: “Her integrity and ability to stand up for what she thinks is right. Those are things that people look forward to.” He adds that the fact that Leone doesn’t apologise for her past helps. “Essentially, viewers and consumers live vicariously through their stars,” he says. “And when they’re honest about themselves, people love that.”

On the film front, Leone is now working on a movie called Tera Intezaar alongside Arbaaz Khan. Her underwhelming performances in the past have now led Leone to seek the assistance of an acting coach.

“I sit right in this corner every day for my acting workshops,” she says patting the seat next to her. She’ll also appear in a song in Shah Rukh Khan’s upcoming movie, Raees, and is working on another undisclosed project in the US.

Five years is a long time for someone who thought she was visiting India for a one-week engagement. And, in that time, not only has Leone changed, but she has also managed to alter both the industry and the country of her parents’ birth.

Her last few films may not have done well, but as Anupama Chopra puts it, “I really admire the machinery that she has created. And she’s done it in a very intelligent, systematic way, in an extremely conservative society that didn’t know what to do with her.”

The trouble with us, Chopra adds, is that we want to put her into a pigeon hole, which she just won’t fit into. “And that’s wonderful!”

Tweets by @forbes_india
Breaking bad: How the world of villains has changed
Rebel with a cause: Sonam Kapoor's diverse repertoire