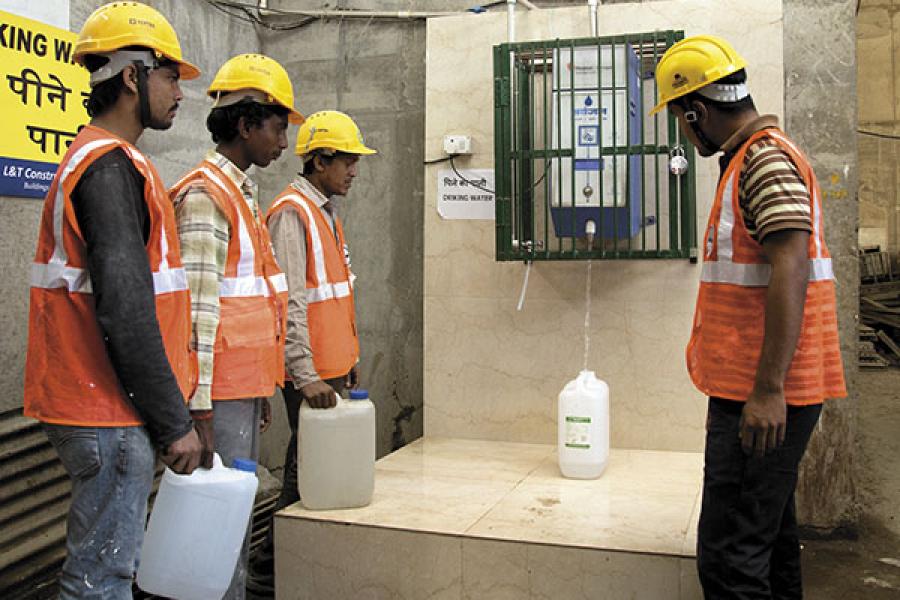 Image: Joshua Navalkar
The Sarvajal initiative has delivered 8.8 billion litres of clean drinking water to over one lakh people across six states

Sawarmal Goyal is a 45-year-old shopkeeper from Palsana, a town 84 km from Jaipur. Once, this region was infamous for its poor quality of water, with contaminants causing long-term ailments. Four years ago, Goyal used to pop as many as eight pills a day to fight a chronic digestive disorder.

Located around 94 km from Palsana is another town in Rajasthan called Jhunjhunu. Like Palsana, the quality of water here was dubious, with high levels of fluoride that led to health issues like joint pains and weakened bones. Khursid Banno, a 50-year-old homemaker from Jhunjhunu, suffers from arthritis and, till a year ago, used to spend as much as Rs 1,500 a month to buy painkillers.

But, of late, life has improved for Goyal, Banno and others like them. Goyal only needs two pills a day now, Banno still has arthritis but the pain is bearable. It’s the access to clean and safe drinking water that has made a difference in their lives.

Both Palsana and Jhunjhunu are sites where the Piramal Foundation, the philanthropic arm of health care to real estate conglomerate Piramal Group, launched the Sarvajal initiative in 2008 to provide clean drinking water to people at the bottom of the pyramid.

When infrastructure creation is spoken of in India, the fundamental parameters that give citizens a good life are usually ignored. Drinking water is one of them.

Consider some vital projections: India has around four percent of the world’s water resources, but accounts for 16 percent of the global population. At present, only 18 percent of India’s rural population has access to treated water. Two-thirds of India’s households lack access to piped drinking water supply, according to Grundfos, a Danish water solutions company and the world’s largest pump manufacturer. The World Bank estimates that 21 percent of communicable diseases in India are related to unsafe water. Diarrhoea alone causes around 1,600 deaths in the country daily. The need to provide safe drinking water also presents an economic opportunity for social enterprises and rural entrepreneurs in India, as well as multinational water solutions companies.

Grundfos has devised a solution called Lifelink, a self-contained, energy- and cost-efficient, decentralised clean water delivery solution meant for developing countries. It will be assembled in India, at Grundfos’s Chennai plant, and will be sold in the country as well as other developing markets.

At the core of Lifelink is a product, called the AQtap, which combines three essential elements for smarter water management: Smart cards to store water credits, a dispenser unit to supply water and accept payments from customers, and a water management system where data is recorded. The solution also contains an ultrafiltration water purification system to treat local water supply and make it fit for consumption. To collect water, people charge a smart card with credit that can be bought either physically or through a mobile wallet, insert it into the dispenser and pay for the water they need.

“Some of the challenges that we have tried to address while designing Lifelink is to find out a precise way to manage water resources and ensure overdrawing of water doesn’t lead to groundwater drying up; collecting revenues in a transparent manner to prevent leakage of funds; reducing running costs to a minimum; and ensuring periodic maintenance of the filtration and water dispensing system by professional service partners,” says Peter Todbjerg Hansen, managing director of Grundfos Lifelink, a Grundfos subsidiary. Grundfos uses solar-powered pumps to extract water to keep operating costs low.

For sales, service and maintenance, Grundfos is relying on a network of franchisees through which it aims to sell its product to local entrepreneurs in India. Its first franchisee in the country is eKutir, a socially-focussed venture engaged in innovating new products, services, and a sustainable model for entrepreneurs at the margins. KC Mishra, director of eKutir, says he wants to start a “water brigade” in Odisha, where he is based. Piramal Foundation’s Sarvajal has so far delivered 8.8 billion litres of clean drinking water to over one lakh people across six states. The initiative makes water available through water ATMs as well as a household delivery model where 20-litre recyclable cans are delivered to consumers, collected back when empty, refilled and delivered again. Sarvajal works with local entrepreneurs who own the water pump and filtration systems, provide the borewell required to draw water from, and the land on which the entire setup is installed. It has developed its own patented remote monitoring technology for its water purification and dispensation installations.

Sarvajal is also engaging with large Indian and multinational companies, encouraging them to adopt villages or schools and support an infrastructure to provide clean drinking water to the local population. Around 20 companies, including Honda Cars, HDFC Ergo, Nestle and DLF, have signed up.

Vasu Padmanabhan, Sarvajal CEO, says that while his organisation’s own operations would remain limited in size and scope as it isn’t a for-profit venture, the cascading effect of Sarvajal’s efforts has been meaningful.

“If you are talking about direct touch points, I may have 500, but more than 2,000 villages have been inspired to do what we are doing as other entrepreneurs have seen us and replicated the setup,” he says. “We encourage others to come into this field. I don’t think Sarvajal can solve the nation’s problems alone.”

The cost of purifying water using Grundfos’s technology works out to around Rs 5-8 for 20 litres, Mishra says. If this water is sold for Rs 10, then local entrepreneurs can earn Rs 2 for every 20 litres sold. Mishra and Padmanabhan, however, admit that not everyone is willing to pay for such water.

But Hansen contends that a customer like a government water utility service can easily recoup in two years the $4,000 that it may have to pay for a Grundfos water dispenser by plugging the revenue leakage caused by physical cash transactions.

Mishra says that even in India’s larger cities, clean drinking water isn’t really free. The cost of making tap water consumable through a purification system is the cost for water that citizens incur. While the upfront cost of Lifelink is high, he says, the economies of scale can justify the investment if it is used by the community as a whole.

(The writer was in Bjerringbro, Denmark, at the invitation of Grundfos)