Final Farewells: Doing it in Luxury with Lungyen Life Service

David Lee brought dignity and luxury to Taiwan funerals, and now the mainland is calling on his services 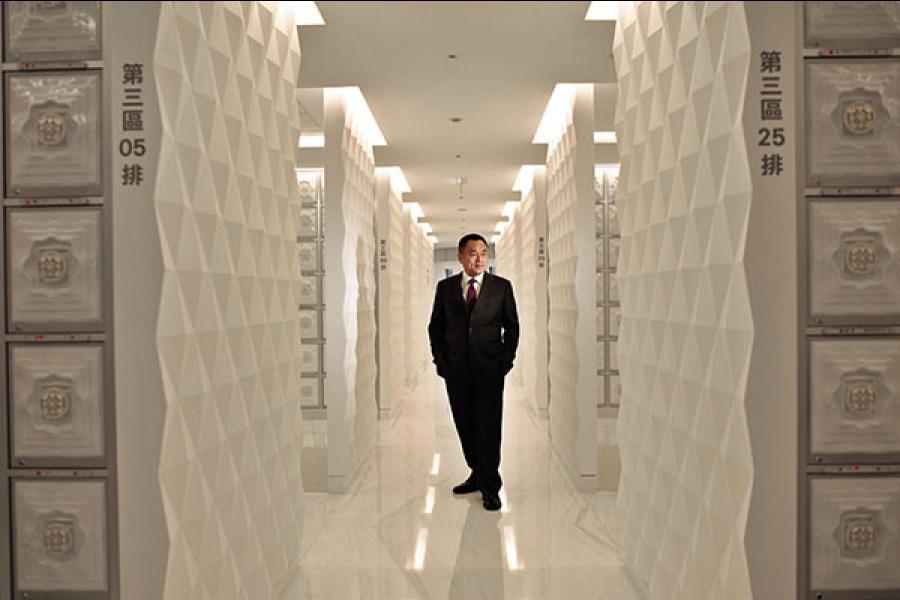 Image: Chris Stowers / Panos for Forbes
Lee in a model for a lavish new columbarium space

Mrs Hsu, in her 90s, is sobbing over the loss of her husband. At the Taipei funeral home she cries out at a lifetime of images while relatives and friends hold themselves back. Attendants, men and women in black uniforms and white gloves, make sure the grieving bid their ﬁnal farewells in an orderly and digniﬁed way.

“In a moment like this we share the family’s deepest pain,” Cindy Chang, a senior funeral director at Lungyen Life Service in Taiwan, says from the sidelines of Mr Hsu’s service.

Funerals in Taiwan aren’t always this calm. Until recently some traditional Taoist ceremonies could go to extremes of incorporating bikini-clad strippers on a neon-lit truck or third-party mourners, who are hired to wail on demand, to provide a loud send-off.

That always gives David Lee, 53, a chill. He started Lungyen two decades ago, and it can claim to be the world’s third-largest funeral specialist by market capitalisation, at $1.23 billion. Only Service Corp International (SCI) and Hillenbrand of the US are larger.

Back then, circus-like funeral rituals and the sector’s lack of professionalism in Taiwan provided an opening to Lee—a mechanical engineer by training who was managing his father’s $15 million-revenue business, shipping conducting foils to Japanese electronics makers.

His father’s best friend offered to let him take over a cemetery in the mountainous northwest coast of Taiwan at a discounted price of $30 million, to be paid in instalments. “I never thought I would have entered into the funeral business,” he says. “But after years of effort we’re bringing the bright side to the dark business of death.”

Lee recalls his ﬁrst visit to a government-run funeral home in Taipei., following the cemetery deal, as “head-spinning”.

“Short of freezers, corpses were scattered in the hallway without any cover. Some of them, packed in dry ice, began to turn red,” Lee remembers. “An executive from the Loewen Group [since acquired by Service Corp] who accompanied me told me that it was the scariest funeral home he had ever been to, after 30 years on the job.”

That horrible experience, however, didn’t scare Lee away, nor did the surprise of friends that he would take on such a tarred trade. With no experience, Lee looked to Japan, where he’d done business for his father, for a “much more civilised” approach to handling funerals.

Sun-Life of Japan, in particular, became a model as Lungyen sought to set his operation apart from Taiwan’s mom-and-pops. Lee commissioned folk-customs experts to retrieve authentic rituals in the Chinese Confucian funeral culture. The packaged services Lungyen offers cost an average of $8,350. Lungyen does 5,000 services in a normal year.

Meanwhile, Lee initiated expensive construction of a 20-storey columbarium at his cemetery site, a so-called yin zhai (residence for the deceased). Cremation is now the vastly preferred means of handling the deceased in Taiwan, where the price of scarce burial grounds has skyrocketed.

On its completion in 2002, business took off. The vault emerged as the company’s major proﬁt driver with prepaid spaces. These advance sales, in which Lungyen dominates in Taiwan, are an especially high- margin business. Whether for future or current use, the resting places account for 70 percent of the company’s sales and have quadrupled in ﬁve years. (In the ﬁrst half of 2013, the company reported pretax proﬁt of $32.7 million on $68 million of revenues, a sales drop-off from the year earlier period when its latest outdoor urn spaces were put on offer.)

Renowned architect Tadao Ando and glass artist Heinrich Wang were recently recruited by Lungyen to collaborate on the interior design of the pagoda’s 17th ﬂoor, where their artistic exhibit, ‘Flawless’, anchors urn spaces that go for a minimum 30 percent premium, at up to $44,000 apiece. “Our capital-intensive business model left our competitors powerless in catching up,” Lee says.

“Traditional funerals may be boisterous but are far from as solemn as those Lungyen organises,” says 70-year-old Hung Chun-chang, who has reserved cubic space for his and his wife’s urns next to those of his deceased parents at Lungyen’s columbarium. He adds, “I like the view here.”

Lungyen is credited within the funeral trade for raising the bar for even basic services. For example, it recruits none but college graduates with a soothing demeanour as its funeral directors. All clients are treated with care with a money-back satisfaction guarantee. 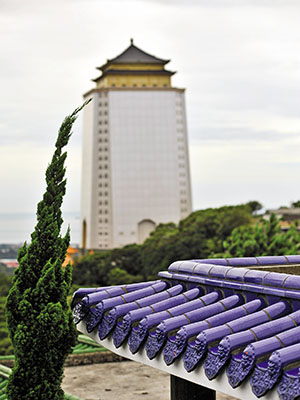 Image: Chris Stowers / Panos for Forbes
The 20-storey yin zhai (residence for the deceased)accounts for 70 percent of Lungyen’s sales
It was 2009 when Lungyen ﬁrst drew in Japanese architect Ando to be the lead architect of a new graveyard bordering on the original site. It is to be green in every sense, at one with its surroundings, with cherry-blossom-lined boulevards included at an estimated cost of $333 million.

The new project, targeted for completion by 2020, showcases Lee’s aim to move up the value chain, says his right-hand man and general manager, Liu Wei-lung.

According to Liu, Lee okayed his choice of Ando after a 10-minute brieﬁng but spent a couple of months exhausting his connections and resources in Japan to pitch to Ando.

During a meeting in Taipei, Ando asked about the budget. Lee gave a philosophical reply instead of a ﬁgure: “We’re in pursuit of No. 1 in the world. I don’t think you will squander a penny on something that isn’t meant to be, nor do I think you will save me any penny that is meant to be spent.”

With that, Ando was in for his ﬁrst and only cemetery engagement. “I fully delegate and have every trust in my management team. Once a proposal is ﬁnalised, it is my job to make it happen,” says Lee, who admits that he wasn’t familiar with Ando’s work prior to the negotiation.

Lee’s extravagance inevitably invites criticism from some in the local industry, who complain the ‘nouveaux riches’ are triggering yin zhai property speculation as land supply tightens.

In his defence, Lee says Lungyen has diversiﬁed its product lines to include those at an affordable price after he acquired six more cemeteries in late 2011 (extending the ﬁrm’s presence islandwide), while pro bono funeral services are given to those in need.

The success and scope of the 480-employee outﬁt in Taiwan, no doubt, has caught the attention of the city government of Wenzhou, in China’s Zhejiang Province, which approached Lungyen to lead its effort to pioneer funeral reform on the mainland.

In March, Lungyen committed to eventually put $489 million into the city, including service instruction and the construction of a top columbarium. (Liquidation of non-funeral assets will help the company’s big capital needs.) Although a Lungyen business operation would be only part of the commitment, Lee hopes his Taiwan model can be duplicated, ﬁrst in Wenzhou, then in other markets of China.

“Give it time,” Lee avers. “Shall we succeed in Chinese markets, we will overtake [SCI] to be the world’s largest—a goal we’ve been striving to achieve.”

Time is certainly on the side of Lungyen, for China now has the world’s biggest aged population, with nine million deaths a year. The industry’s prospects in China are promising as surveys show that mainlanders prefer to spend more than they can afford on funeral arrangements, as a reﬂection of social and economic rank. “In face of free choices, consumers in China are less rational, as the majority tends to feel the pressure of vanity in keeping up with others for lavish funerals and burials,” says Qiao Kuanyuan, a business professor at the University of Shanghai for Science & Technology.

Qiao’s survey found that more than 50 percent of people in Shanghai are under the inﬂuence of what he calls the “comparative mindset of vanity”, whose ideal funerals exceed the depth of their pockets.

But for all that spending impulse, the China market had proven dicey for earlier forays in this sector, notes Yang Kuo-chu, deputy director of the Life Ceremonial Research Centre at Nanhua University in Taiwan. Aside from regulatory red tape, the public in China, which has long accused the industry of proﬁteering, still ﬁnds it hard to accept funerals as elaborate as those in Taiwan. A funeral and burial will take place over three days, while in Taiwan the ritual can last more than 14, Yang says.

Lungyen’s Lee, however, doesn’t ﬁnd the business challenge in China daunting—he can appeal to both the middle- and the high-brow. The big hurdle for Lungyen to succeed in Chinese markets, he says, is personnel. “Everything can go wrong if you ﬁnd the wrong talent,” he says. Lungyen will look to train fresh recruits for at least a year and even hopes to ﬁnd college graduates, preferably educated overseas, as pallbearers.