Sometime in the third week of November last year, a rather incongruous bit of news found its way into the papers. Indian Oil Corporation (IOC) made public its intention to get into nuclear power. It is another matter altogether that the significance was lost in the barrage of information we’re pounded with everyday. For a moment though, look at the news from a different perspective. With revenues in the region of $63 billion, IOC is India’s single largest company. It controls half the country’s market for petroleum products. Its closest competitor in India, Reliance Industries (RIL), with revenues close to $32 billion, is half IOC’s size. But these numbers don’t reveal the whole truth. Dig a shade deeper and the numbers reveal an altogether different story.

IOC’s profits as a percentage of its revenues are just 0.9 percent. RIL on the other hand takes home a little over 10 percent. For that matter, when compared to its global counterparts, IOC comes off looking rather sorry on this count. The only reason why IOC continues to be in the business on the back of these numbers is because it is owned by the government, which in turn, controls fuel prices at pumps. The exigencies of politics demands fuel is sold at subsidised prices. That makes it unviable for private players to get into retail while companies like IOC get off the hook on the back of oil bonds — an instrument issued by the government to compensate for the losses made on retailing. These bonds are shown as income on the profit and loss account statements, and convert losses into profits.
Getting Shot Down
Now, the folks at IOC know this can’t last forever. Eventually, the markets will be opened up and the administered price mechanism will give way. The most logical option would be the natural gas business — it’s cheaper than oil, cleaner, and abundantly available. All available indices though indicate the opportunity has passed IOC by. By the time this year is through, Gujarat, home to almost half of India’s oil-refining capacities, will consume more gas than oil products. “We are acutely aware sales of liquid fuels are coming down, particularly in markets where gas is available,” says B.K. Bansal, director, business development at IOC. It isn’t just about cars and taxis in the country switching to gas-based fuels, but IOC’s large customers like power and fertilizer plants that are migrating from naphtha to natural gas. 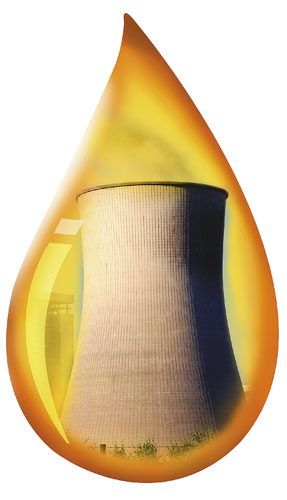 Image: Photograph: Rene Mattes/ Hemis / Corbis, Imaging: Hemal Seth
Now, it isn’t as if IOC hadn’t spotted the opportunity in gas when it first reared its head. It’s just that it didn’t do much about it for various reasons. Its most serious attempt depended largely on tying up gas supplies with Iran. In fact, as early as in 2005, IOC had signed an agreement with the Iranian government to build a pipeline between Iran and India that would pass through Pakistan to transport gas. It had also contracted to import LNG (liquefied natural gas) worth $18 billion by sea over 25 years. But adverse geopolitical conditions put a spoke in these plans and Iran has since backed off.
In any case, says a former director at the company who wishes to remain unnamed, “All attempts to get into the gas business were shot down by people who thought it would cannibalise the oil business.” Then there is the fact that it always led a hand-to-mouth existence and waited often for the oil bonds to come its way to keep the wolves at bay. Between all of these variables put together, IOC had to cede ground. It also stands to be impacted the most by these changes in the ground rules.
Nuking Up
In some sense, that explains why IOC has chosen the rather unconventional nuclear route. “In any case,” says Bansal, “as an energy company we need not restrict ourselves to oil.” It signed up with the Nuclear Power Corporation (NPC) to pick up a stake in a Rs. 10,000 crore project. The idea is to get into the business by collaborating with NPC first and go it alone when the government allows it to. The two companies are currently trying to figure out an ongoing project that IOC can get into with either a 26 percent or a 49 percent stake.
While Bansal is quick to admit IOC doesn’t know much about nuclear reactors right now, the business case is clear. Nuclear power has support at the highest levels of the incumbent government. It wants production from this source to leapfrog from the existing 4,000 megawatts (MW) to 25,000 MW by 2020. IOC isn’t the only company that thinks there is significant potential here. Private sector companies like Larsen & Tubro, Reliance Power, GMR Power and GVK Energy are hoping to ride the wave. And IOC is hoping to get there ahead of the rest.
NPC on its part has emerged as a deft player forging partnerships with several companies for investments in its various projects. The company, which was carved out of the Atomic Energy Commission to build, own and run nuclear plants, has over the years battled project delays on account of fuel problems, delayed equipment supplies and slow environmental clearances. Nuclear reactors are hugely capital intensive and NPC has over the past year been scouting for partners who can bring in funding. To that extent, IOC was just the kind of company NPC wanted to tie-up with. It is the third public sector company to sign up to pick up equity in NPC’s six large reactors planned over the next few years.
Analysts tracking IOC, however, are not so buoyant about its nuclear plans. They argue the company would be better off diversifying into related areas like oil exploration. Smaller oil-PSUs, like the Mumbai-based Bharat Petroleum, which set up an exploration subsidiary two years ago, recently struck oil in the hugely-prospective Brazilian offshore. IOC does have an upstream oil programme running for several years, but is nowhere close to securing the 60 million tonnes of crude oil that it burns up in its 10 refineries every year. Entering the nuclear power business exposes IOC and its group companies (Chennai Petroleum and Bongaingaon refineries) to new risks. But after years of dithering over these calls, IOC now reckons its time has come.