Mukesh Ambani awarded the Dean's Medal by University of Pennsylvania

Mukesh Ambani, chairman and managing director of Reliance Industries Ltd., was awarded the Dean’s Medal from the University of Pennsylvania’s Eduardo Glandt, dean of the School of Engineering and Applied Science. The recognition was for his leadership in the application of engineering and technology. Awarded on Friday, January 8, 2010, at Trident hotel in Mumbai, the medal was presented to him for his initiative to usher in Reliance’s vertical integration journey from textiles into fibers, petrochemicals, petroleum refining and eventually oil and gas exploration and production. Today, Reliance is a global leader in polyester, petrochemicals and refining, including the world’s largest petroleum refinery complex at Jamnagar. Commenting on the inaugural medal, Dean Eduardo Glandt said, “Mukesh Ambani embodies what the engineering profession can contribute to a country, as someone who seeks to apply technology for the betterment of society.”

In his acceptance speech, Mukesh Ambani said, “I will treasure this medal. It is much more than the recognition of the modest contribution as a chemical engineer from India. It recognizes the collective achievement of the Reliance family and the creativity of over 25,000 engineers in Reliance. I dedicate this Medal to the indomitable spirit of our founder chairman, Dhirubhai Ambani and each and every member of the Reliance family.” 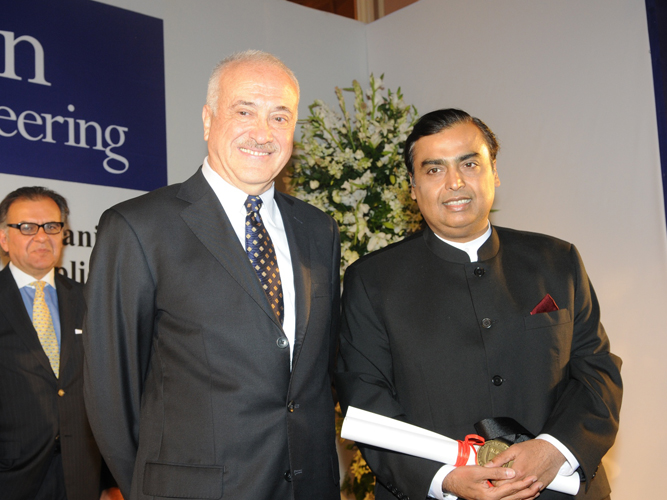 Mukesh Ambani with Eduardo Glandt, dean of the School of Engineering and Applied Science
Following is an excerpted version of his acceptance speech:
Dean Eduardo Glandt, Ladies and Gentlemen, It is a privilege to receive this honour. I receive this with a deep sense of gratitude and  great humility. The University of Pennsylvania is one of the topmost universities in the World.
An Ivy League institution that has produced 15 Nobel Prize winners. Where the Tree of Excellence has remained evergreen, generation after generation for the past 270 years. The School of Engineering and Applied Science is a jewel in the crown of this great university. My warm congratulations to Penn Engineering School for their continued leadership over the last two centuries.
Friends, As I stand here today, memories of another evening, 12 years ago, come back to my mind. When the Business School of the University of Pennsylvania honored my father Dhirubhai Ambani with the Dean’s Medal.
It was a touching gesture. It was a recognition of a person who became a legend in his lifetime. My father started Reliance Industries Ltd. From a scratch with a dream. The dream of making Reliance India’s number one corporation.
The dream of demonstrating that India was capable of building world-class production assets in critical industries.
Also, the dream of proving that the wealth so created can be owned and shared by hundreds of thousands of ordinary Indians. He turned his dream into reality in his own lifetime. He defied all handicaps. He faced many hurdles and hardships. But no hurdle could deter him, no hardship could discourage him. For he was the personification of the invincibility of human spirit. The same spirit continues to guide and inspire us at Reliance.
Dean Glandt, Thank you for conferring me with the Dean’s Medal. I will always treasure this Medal. For me, it is much more than recognition of the modest contribution as a chemical engineer from India. Rather, it recognizes the collective achievement of over one hundred thousand members of the Reliance Family. It recognizes the creativity of over 25,000 engineers in Reliance. Together, they have realized ― and are continuing to realize ― the dream of Dhirubhai Ambani with dedication, commitment and team spirit. I therefore dedicate this Medal to the indomitable spirit of Dhirubhai. And also to each and every member of the great Reliance Family.
A NEW DECADE
We are meeting at the beginning of a new decade. I believe our world has entered a fundamentally new phase in human history. Financial crisis, energy crisis, food crisis, water crisis, environmental crisis, crisis caused by international terrorism: all these are global challenges.The decade gone by taught many important lessons to the world. 9/11 at the beginning of the last decade reminded the world about the barbarity of terrorism. 26/11 towards the end of the last decade was yet another reminder. And this very hotel, The Trident was both victim and witness- my deep appreciation for all staff of Oberoi for facing and overcoming terror with courage. Security in today’s globalised world is the common and collective responsibility of all the countries and all the communities.
Educational institutions can make a fundamental contribution to advancing the agenda of peace and security in the world. The financial crisis of 2008 was another threat to the wellbeing and sustainable development of the world.
It highlighted the interconnectedness of the world. What started in one country spread like a rapid wildfire to the entire world. The lesson that this crisis taught to both the Wall Streets and Main Streets in countries around the world was the same: Money cannot produce money.

In history, many things may change. But what will never change is the basic truth that sustainable value creation in every society is only possible through the virtuous cycle of science, technology, engineering and enterprise. Science produces technologies; Technologies promote new engineering and managerial practices; And these in turn produce products and services that satisfy the real needs of the people in old and new markets. The outcome of this virtuous cycle is the sweet fruit of human progress. Therefore, in future, we should further strengthen existing partnerships, and forge strong new partnerships, in every link in the global value creation chain. Going forward, financial engineering should take the back seat. And real engineering should take the driver’s seat.

A NEW WORLD
As the global economy resets itself after the financial crisis, a new world is emerging before our eyes. The new world will be fundamentally different from the old. Employment creation is a challenge for all countries. Already, center of economic gravity is shifting from the West to the East. Countries left behind in the race for development are fast catching up. Asia is witnessing unprecedented prosperity. Yet, many parts of Asia also present a picture of deprivation and under-development. The deprived are demanding their due share. The poor are still denied access to food, water, housing, electricity and transport ― the basic necessities of life. Therefore, the challenge of equitable development has become most urgent. So has the imperative of sustainable development.
Sustainable development demands more out of less from the finite resources on our fragile planet. The fragility of Mother Earth requires frugality on the part of her children. I strongly believe that the world will have to devise new developmental models that will provide growth with sustainability, and development with equity. 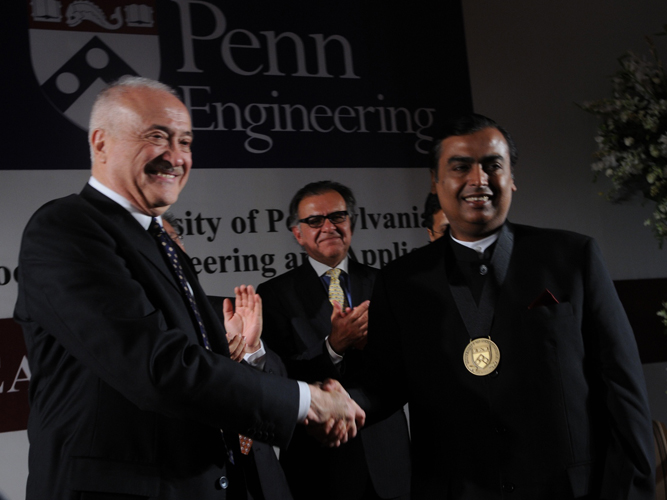 ROLE OF ENGINEERING
The new developmental models will require partnerships and newer ways of solving problems. In this new world, problems cannot be segregated into separate silos. Nor will their solutions reside in separate silos. In this new and interdependent world, we have to become silo-breakers in our thinking, policies and strategies of development. Every single challenge that the world is facing demands a creative response from scientists, engineers, entrepreneurs and policy-makers. Will we rise to the occasion? We can. We must. Speaking about engineers, today they are creating marvels that were unimaginable even a couple of decades ago. In the past, engineering harnessed the power of giant machines. Now it has ushered in an era of miniaturization. It has also ushered in an era of democratization of the power of these machines.
There is simply no letup in the landscape-altering effect of modern engineering. From manufacturing, marketing, construction, personal and business communications, healthcare, energy conservation, entertainment and education ― innovative engineers in various branches of technology are proving to be game-changers in development. The most significant thing in today’s technology is that it will develop unprecedented intelligence. Innovation and intelligence together can solve most of  the social problems.
FUTURE VISTAS FOR ENGINEERING
If we are able to bring about this new convergence between intelligence, innovation, enterprise and social needs, the opportunities for growth in the 21st century are limitless. After all, the distinguishing hallmark of this century is the explosion of knowledge in several domains. Science, technology and engineering have an epoch-making opportunity to evolve to the next level, by making common cause with social sciences, responsible entrepreneurship and good governance. Ensuring that more and more people become productive in their happy and harmonious local habitats need not remain a utopia.
This was the vision of Mahatma Gandhi. He was one of the greatest innovators of this age. I believe that technology, wedded to the Gandhian vision, can create a better future for our children in all parts of the world.
VISION FOR ENGINEERING EDUCATION
Education in India is also at the doorsteps of transformation. There is a need for overhauling the methodology of education. Education is all about problem-solving and change management. It is about igniting curiosity and creativity.  It is about doing things with one’s own hands. It is about encouraging lateral thinking with a multidisciplinary approach. It is also about equipping students with a wide range of “soft skills” such as communication, teamwork and leadership. It is about creating young and idealistic men and women who can “reverse engineer” future problems and “forward engineer” their solutions. A stronger and more self-confident India is emerging on the global scene.
Access to world-class education is not only a necessity but a strong pre-requisite to building a strong India. It is by far the strongest aspiration of young Indians.
It gives me great pleasure to share with you this evening that the Reliance Foundation, the new philanthropic initiative of the Reliance Group, has decided to set up a New Age world-class university in India. In the fabled tradition of great American universities like UPenn, it will promote education and research in all disciplines of knowledge ― from science and technology to liberal arts. It will also forge partnerships with reputed universities around the world.
It will be international in scale and in best practices, but with an Indian soul.
I humbly accept this award on behalf of the entire Reliance family with a renewed commitment to work for a strong and resurgent India. A 21st Century India that is respected by the world.