Education and entertainment combine to make KidZania a novel theme park. It also helps that it’s being backed by Shah Rukh Khan 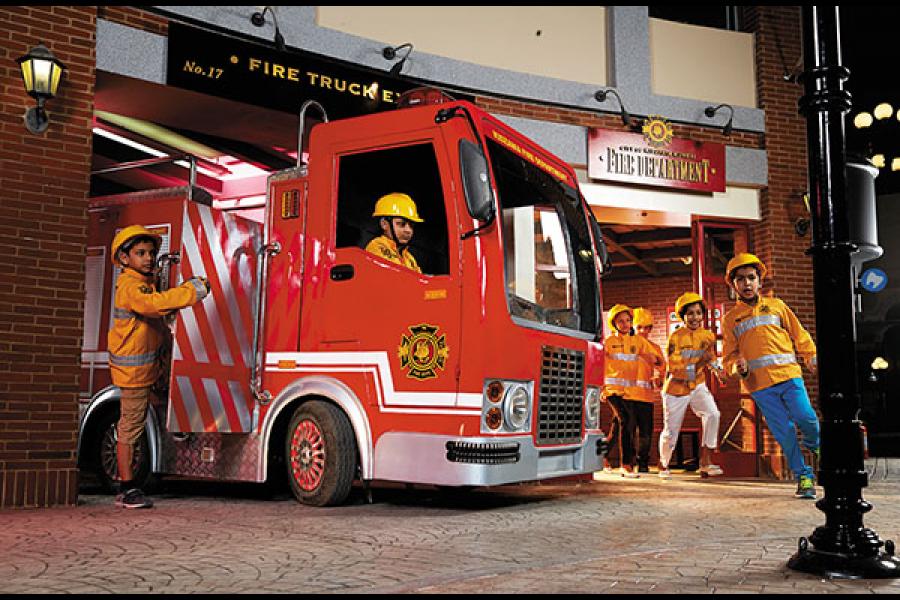 A few years ago, an NRI businessman and a Bollywood superstar, both still unknown to each other, had a common wish. They wanted to set up a children’s theme park. One strategically wanted his family’s business empire—focussed on manufacturing thus far—to enter the consumer space; and the other’s excitement stemmed from his children’s fascination for such entertainment, as well as his own love for kids. Fate brought the two together.

Paras Chandaria, 41, and Shah Rukh Khan, 47, joined forces and KidZania was launched in India in the last week of August. In 2006, Chandaria, who runs the Singapore unit of his family-promoted Comcraft Group, was on a business trip to Indonesia. It was there that he heard about KidZania, a Mexican edutainment chain for children. He found the idea novel and soon took a trip to KidZania Japan with his two daughters (aged six and eight then) to experience it first-hand. They fell in love with the concept. “There wasn’t a single kid who wasn’t happy. Everyone was learning and enjoying the entire process. The Mexican company running KidZania shares the same values as us—making a social impact while doing business,” says Chandaria.

Around the same time, Shah Rukh was at a Dubai shopping mall with his family; his children were pleading with him to let them spend more time at the KidZania centre there. He was witness to their enjoyment. “I love kids and entertainment; here was a business that had both these elements. And this was something I had never seen anywhere, having travelled across the globe and seen the best entertainment/amusement parks. I thought we just have to bring this to India,” Shah Rukh says.

Meanwhile, Chandaria did a detailed feasibility study to launch KidZania in India and, in 2008, he signed the licensing deal with KidZania Mexico. Subsequently, he also got The Xander Group, a private equity firm, to invest in the project. However, he needed another partner, preferably from the entertainment sector, to help market the concept to the masses and connect with both children and brand partners—vital to the launch of KidZania. He asked around in London, where he had grown up, and one name cropped up in every conversation—Shah Rukh Khan. “I rarely saw Indian movies back then so I didn’t know who he was. And then, one day in a cab from the Mumbai airport to my hotel, I asked the driver who his wife’s favourite Bollywood actor was and who his kid admired the most—both the answers were Shah Rukh,” Chandaria says.

He was finally introduced to Shah Rukh by a common friend, Jay Mehta, co-owner of the actor’s IPL franchise, Kolkata Knight Riders. He had found a partner whose passion and enthusiasm matched his. Shah Rukh readily agreed to pick up 26 percent in the India franchise and claims to be involved in the creative side of the business too; he also helps connect the park with the many brands he endorses.

KidZania IN Mumbai
KidZania Mumbai is a mammoth 75,000-square feet town built to scale for children and located at the R-City Mall in Ghatkopar. You enter with a boarding pass. It feels almost as if you are stepping into a new city. It mimics a real city with various establishments such as a bank, a fire station, a cinema theatre, a university, food and beverage outlets, an industrial area where goods are manufactured, a town square, and shopping outlets. These establishments are commercially sponsored and run by real-life brands—Yes Bank (ATM), Coca-Cola (bottling plant), Hyundai (driving school), Kellogg’s (cereal factory), Central (superstore), Big Bazaar (department store). It serves as an opportunity for these brands to reach out to future consumers.

Children need to use KidZos, the town’s own currency, by opening an account at the only bank there. This helps them learn the concept of banking, saving, using an ATM with their own debit card as well as conducting financial transactions at the activity centres.

During the five-hour duration of their visit, children pick up real-life skills by working professionally at the Big Bazaar departmental store or Cadbury’s chocolate factory, learn the functioning of television channels at the Star TV studio or even train to be a journalist at the Times of India newspaper office. A team at the employment centre conducts tests to understand their skills and interests, helps them build a résumé and guides them towards jobs based on their talent and passion. With every job, they stand a chance to earn more KidZos which can be spent on fun tattoos or fancy treatments at the salon. 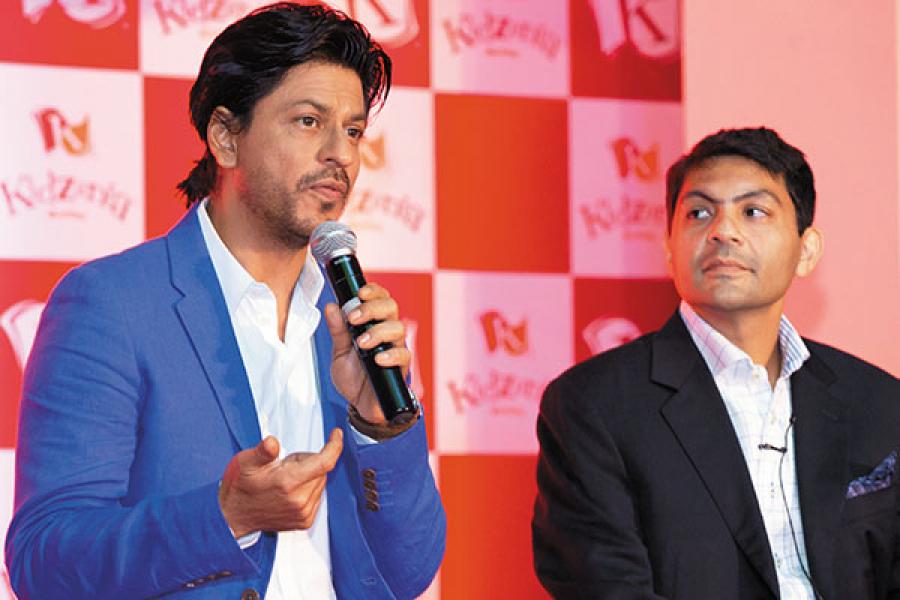 Image: Prasad Gori for Forbes India
Shah Rukh Khan, and Paras Chandaria of Comcraft Group have partnered to launch KidZania in India
Business Logic
KidZania, founded by Xavier López Ancona in Mexico in 1999, operates 13 centres across nine countries and plans to open 11 more by the end of 2015. ImagiNation Edutainment India, the India franchisee, will launch three centres to begin with (in Mumbai, Delhi NCR and Bangalore) and has estimated an investment of Rs 300 crore. According to Sid Yog, managing partner at The Xander Group, they will eventually take the concept to four or five cities and the business will be Ebitda (earnings before interest, taxes, depreciation, and amortisation) positive in one full year of operations. The Mumbai centre has seen an escalation of cost from the earlier estimated amount—approximately Rs 100 crore has been spent to build the theme park.

Revenue streams for KidZania across the globe emerge primarily from ticket sales (50 percent) and brand partnerships. The latter is normally sold for a five-year period; signing amounts can range from Rs 50 lakh to a couple of crores and annual partnership fees are charged additionally. Fourteen brands have already tied up with the Mumbai centre. What helps KidZania’s credibility is the experience these brands (540 of them globally) have had with it over the years.

For instance, Sanjeev Kumar, KidZania India’s director and CEO, says, the Yes Bank team was quick to understand the value of associating with KidZania and it took just two meetings to close the deal. Chandaria had a similar tale to share. “Kishore Biyani of Big Bazaar was amazing. When our team went to meet him and tried to explain the concept, he immediately said ‘stop, I understand it’. Within 15 minutes, he wrote a cheque as a shagun [auspicious signing amount],” he says.

But there are other big corporations that take longer to be convinced. “We need to pitch to them at many levels to finally get them on board,” he adds.

Since this is a long-gestation business, they have an 18-year lease with R-City Mall. “Normally it takes about three to five years to recover the investment from a centre and make it profitable. Our estimate is to have around 650,000 kids in the first year which can go up to 800,000 in the second,” says Kumar. Chandaria believes the business will be operationally cash-flow positive if they get an average of 1,500 kids a day in the first year.

Long Haul
It may sound like an easy ride for KidZania but there are enough potential bumps ahead. At Rs 950 a ticket, it won’t be easy to attract children from all economic backgrounds. Adults have to pay a similar amount to accompany their kids. High location rentals, significant operating costs as well as a bleak Indian economy add to the risks associated with a Rs 300-crore investment. Also, the theme park will compete with other forms of entertainment such as multiplexes, gaming centres like Smaaash in Mumbai and amusement parks such as Essel World and the recently-opened Adlabs Imagica.

What works in its favour, however, is the no-compromise attitude of Indian parents when it comes to spending on their child’s education. The KidZania team plans to approach schools across Mumbai with special packages. They are also going to offer the venue to corporates for team-building activities. Shah Rukh says he has already thought of designing dedicated KidZania buses that will pick up children from schools and give them a joyride to the centre.

He adds that there are inquiries from children’s TV channels which want to shoot at the KidZania centre. Film shoots could potentially become an additional source of income, thanks to the actor’s connection to this project.

Personally, Shah Rukh is building his own empire in the realm of sports and entertainment, and says he is ready to give this business at least five years to build scale and turn profitable. “KidZania is a proven concept running successfully across so many countries. We’re just bringing it to India. It’s similar to Bollywood doing a remake of a popular South-Indian movie and turning [it to] a block buster,” he says with a laugh.

Tweets by @forbes_india
The American Income Crisis: The Fed Could Stop It
Future-gazing with Sci-fi films