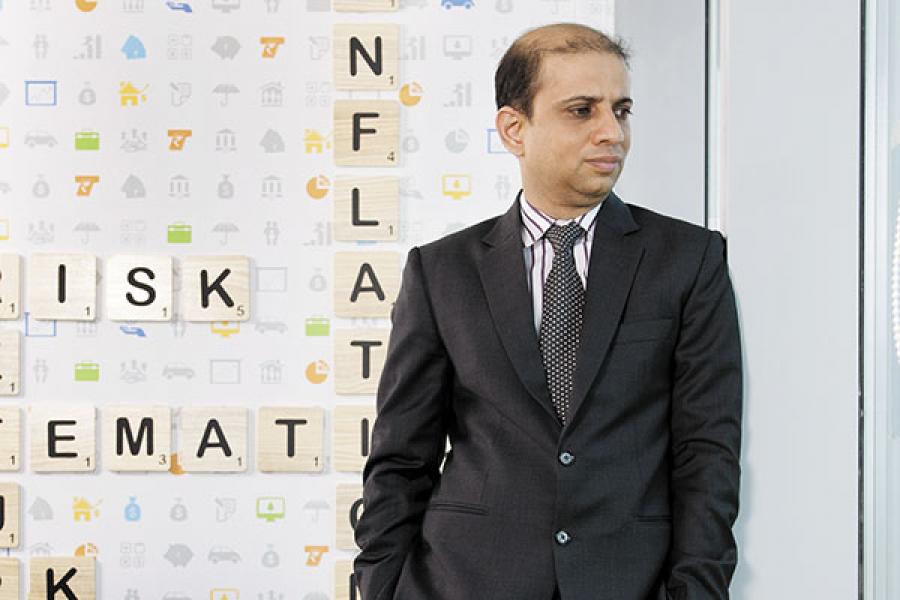 Image: Mexy Xavier
Nimesh Shah, MD and CEO of ICICI Prudential Mutual Fund, is a go-getter who does things that work best for the organization

It’s 1.20 pm when the senior management of ICICI Prudential Asset Management Company (AMC) starts to trickle into the dining room at the company’s 13th floor office at One BKC in Mumbai. A group lunch is a daily affair for the A-team of Nimesh Shah, the managing director and CEO of the fund house.

Forbes India is visiting S Naren, the executive director and chief investment officer, who is busy discussing the pros of the company’s successful Balanced Advantage Fund over the phone with an investor.

Shah, on the other hand, is telling his colleagues about a computer game he used to play to understand mergers & acquisitions. “Why is something similar not available for mutual funds?” he asks rhetorically, and then steers the discussion to ICICI Prudential’s IPRUTOUCH mobile app, which helps investors and distributors buy and sell funds seamlessly. “I’m happy with the way this [the IPRUTOUCH app] works. All my communications with my distributor is through this app. My entire office could, one day, function in this device,” Shah tells Forbes India pointing to his smartphone.

When B Ramakrishna walks in, he poses some urgent questions for Shah. As executive vice president, he is the custodian of the finance, compliance and technology functions of the company. “If he [Ramakrishna] wants something, he wants it immediately,” Shah tells Forbes India.

The lunch soon wraps up and the team of 10-odd people heads back to their workstations. But the upbeat mood lingers and the office, just like the lunchroom, is buzzing with ideas.

This is just another day in the life of some of India’s most accomplished fund managers, headed by the unassuming Shah, 46, who began his career at ICICI as a banker in 1992. He was one of the first senior managers selected to lead the global foray of the private lender into the Middle East and Africa in 2002 and helped establish the ICICI brand in these geographies. In 2007, he returned to India to lead ICICI Prudential, its mutual fund business.

Since then, he has figured out the formula to build a successful fund management company. Shah has focussed on the right people and the right processes, which is evident from the performance of the company’s funds.

Its mutual fund schemes are always in the top quadrant. According to mutual fund analytics company Value Research, ICICI Prudential’s multicap Value Discovery Fund has returned 18 percent annually over the last five years against the multicap category average of 11.50 percent. The Balanced Advantage Fund—a balanced fund that invests in both equities and debt—has returned 13.96 percent annually in the last five years whereas the category average for the period is 11.63 percent. The Focused Bluechip Equity Fund has returned 12.55 percent in the same period, against the bluechip category average of 9.78 percent.

The three funds, which account for a little over half of ICICI Prudential’s Rs 64,709-crore equity corpus, are ranked among the top ten funds in their respective categories.

The high returns on investment have translated into more investors entrusting their money with the company. In March this year, ICICI Prudential pipped HDFC Mutual Fund to become the biggest AMC in the country, with assets under management of Rs 175,881 crore, according to industry data (see chart on next page).

There has been criticism that the growth in AUM has come on the back of high commissions that make distributors favour ICICI Prudential over competitors. But Shah argues that commissions are not the only reason for the growth of his company’s assets. “It [higher AUM] has come due to the performance of almost every equity mutual fund scheme we have. The success has not come overnight. We have worked hard to provide long-term returns to our investors,” he says. 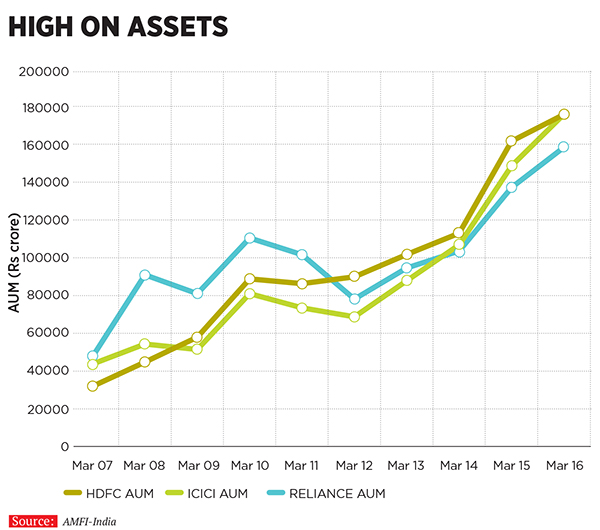 While Shah admits that he pays high commissions to distributors, he contends it has not hurt investors in terms of higher costs.

Like with commissions to distributors, Shah’s approach to the mutual fund business challenged most industry norms. Shah has built an AMC whose promoters (ICICI Bank) are bankers. Most AMCs promoted by banks looked at mutual funds as any other financial product like a credit card, a fixed deposit or a savings account. The idea was to attract more customers to the bank. For many years, banks never looked at mutual funds as products that were different from interest-earning deposits. They believed that mutual funds could be sold by extending the reach of the bank’s brand.

Nimesh Shah changed all that. He was clear that he wanted to build a company which understood investing at a more fundamental level. AUM mattered to him but building a credible asset management business was more important.

He concentrated on two things. The first was to work with the right investment team and the second was to bring in the right processes to ensure smooth workflows in extreme situations like market falls or the loss of an important fund manager.

Naren is in charge of the investment team, which comprises fund managers Mrinal Singh and Manish Gunwani. The three fund managers have different, perhaps opposing, ways of thinking. While Naren is a contrarian and a value investor, Gunwani understands the growth philosophy or management of a company. Singh’s approach, on the other hand, is to manage portfolio risk through diversification and he is also a sound stock picker. By allowing three different styles of fund management to flourish under one roof, Shah has ensured that his fund house is not over-exposed to the pitfalls of any one strategy.

Shah’s team also keeps a close eye on macroeconomic factors. Based on economic cycles, they have been able to take the right calls in terms of product launches. In 2011-12, they were of the opinion that India’s current account deficit (CAD) was high and the dollar would strengthen against the rupee. They became bullish on export-oriented and import-substitution companies.

They were also one of the earliest funds to create a feeder fund vehicle called the US Bluechip Equity Fund for Indian investors to invest in the American market. The fund, launched in July 2012, returned 53.2 percent in 14 months.

In October 2013, Shah and his team decided to launch a series of closed-ended schemes (where the invested money is locked-in for a specified time) to invest into the midcap segment. They decided to pick stocks available at low P/E multiples and also pay a three-year upfront commission to distributors as the invested money would be locked in for that period. In case of open-ended funds, it is important to allocate around 30 percent of the scheme’s assets to large caps in order to meet redemptions. But closed-ended schemes do not have such constraints as there is no pressure of redemptions. Since midcaps were undervalued at the time, it made sense for Shah to have a fund which could entirely invest in midcaps. The investment would be locked in and this would help in delivering good returns, despite short-term market volatilities, over three years.

Shah feels that it is important to remunerate the distributors fairly and paying the three-year commission upfront was leading to a happy experience for the AMC, the investors and the distributors. While critics say that the commissions are high, Shah says that he is also giving high returns to the investors. The various midcap schemes account for 9 percent of ICICI Prudential’s equity AUM. It is just a matter of time till the closed-ended funds come up for redemption in October 2016. Based on the returns that these funds provide, there is a big chance that Shah will be able to direct these customers to his other open-ended schemes.

“He is a go-getter and an aggressive CEO who will not miss an opportunity. Most of the large mutual fund players stayed away from the closed-ended category but Nimesh Shah went after it and made it successful. He understood the customer’s requirement and also the distributor’s role,” says Vikaas Sachdeva, CEO, Edelweiss Mutual Fund.

Shah’s straightforward attitude is the hallmark of his personality. He is known for being objective and forthright while talking to his entire team. Aashish Somaiyya, who headed product development at ICICI Prudential, recalls how in 2008, Shah ran into him at the corridor of Lower Parel’s Peninsula Corporate Park, the company’s former office. Shah asked him to justify his cost to the company. Somaiyya was taken aback. He told him about his targets and what he had achieved till then. Shah looked pleased. “You didn’t mind being questioned and actually used this as an opportunity to update me about your targets. In most cases, people get offended,” Shah told Somaiyya.

Somaiyya, who is now the CEO at Motilal Oswal Mutual Fund, says  he has learnt a lot from Nimesh Shah. “He is a practical manager and does things that work best for the organisation. The fact is that he is very objective in his approach and is always willing to listen.”

Shah prefers to be on the ground and learn by listening to ordinary customers about their understanding of the financial markets. Some years ago, he met a school friend who told him that he doesn’t invest in stocks because the markets are volatile. Shah tried explaining to him that volatility is an opportunity and that he is losing on returns. Later, he returned to his office and worked on a fund called Volatility Advantage Fund. The idea behind the fund was to take more exposure to debt instruments than equities and reduce volatility.

But it was very difficult to sell the scheme. Shah explained it to a distributor in Ranchi who liked the idea. He told Shah that this fund is difficult to sell because ‘volatility’ has a negative connotation. Shah accepted the feedback and changed the scheme’s name to ICICI Prudential Balanced Advantage Fund.

Today the fund has a corpus of Rs 11,360 crore and is the fastest selling equity product in the mutual fund stable. The fund is structured in such a way that a quant formula decides the allocation between equity and debt. It is a defensive product for people who don’t want to be exposed to the risks of equities.

Shah says his team and he want to concentrate on simple and active products that provide returns to investors, than join the rat race to clock a higher AUM. He feels that it will be a long time before the Indian markets evolve like the American market. Until then, he says, what will work are products that are well understood by normal investors. To that end, he plans to do what has worked for him in the past—listening to people.

Tweets by @forbes_india
Innovating through design: Part II
Government IT spend forecast to grow by 3.1% to $7 billion in 2016: Gartner