The firm's portfolio management scheme is one of the biggest in the Indian market, and long-term foreign investments continue to pour in 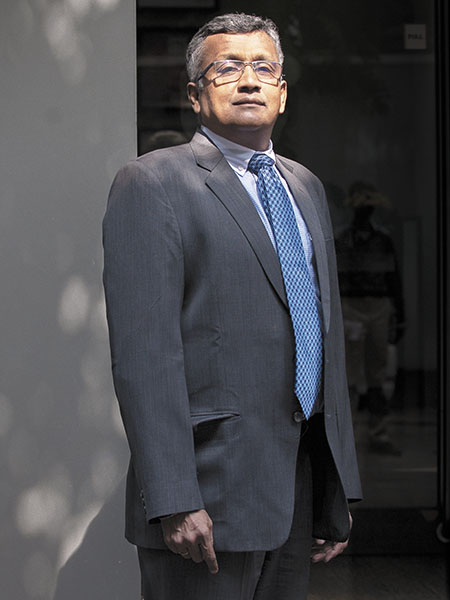 IV Subramaniam, managing director and CIO, Quantum Advisors
Image: Vikas Khot
The conventional way to build a trusted financial advisory company is by first cultivating faith in the local market, and then selling its advisory to foreign clients. But in the case of Quantum Advisors, founded by Ajit Dayal, 56, in 1990, the process has been in reverse order. The company began as an advisory for foreign institutional investors (FIIs) and then started its mutual fund (MF) business. And while the MF business is still small, the advisory business, now a portfolio management scheme (PMS), manages $3 billion as of September 30, 2017. Though the PMS business is not tracked by analytics agencies, several leading market experts call Quantum one of the biggest in the listed equities space; the other big PMSes are in the range of $2-2.5 billion, and belong to the likes of the ASK Group, Enam Asset Management Company and Motilal Oswal.

“What has worked for us in the PMS product is the investment process. We follow deep value investing that is appreciated by our clients. We are conservative in frothy bull markets. We have always kept away from temptation,” says IV Subramaniam, 55, managing director and CIO, Quantum Advisors. The PMS targets long-term FIIs, including pension funds and university endowments.

Subramaniam, who runs operations while Dayal has adopted a mentor-like role, has a contrarian investment philosophy and approach. While competitors look at fast-growing companies, Quantum, he says, follows a value-investing strategy that looks for and invests in traditional and fundamentally strong companies that are typically out of favour in the market. This means, the fund may not benefit during bull markets, during which rivals make high returns.

But what gives Quantum an edge, says Subramaniam, is that its PMS falls by a smaller level when the markets collapse, and also recovers fast.

Considering that both Quantum’s PMS as well as its Quantum Long Term Equity Fund (QLTEF)—its flagship mutual fund targeted at retail investors—have the same portfolio, the performance and investment philosophy of one is reflected in the other. Over the last one year, the fund returned 17.45 percent, against the category average of 23 percent. But a glance at 10-year data will show that it returned 13 percent as against the category’s 7.88 percent, and is ranked second (on returns) among 53 funds, according to Value Research, a fund analytics company.

The PMS market in India, though growing, is still small at ₹90,000 crore

The investment philosophy of Quantum’s PMS has been developed by Dayal, who worked with legendary value investor Thomas “Tom” Hansberger.

This was in 1997-2004, during which time Dayal was the lead manager of the $2 billion Vanguard International Value Fund, then a client of Hansberger Global Investors. During the period, Subramaniam was managing the India portfolio of Hansberger Global Investors. In its formative years, Quantum Advisors, which started as a research house called Quantum Financial Services in 1990, had a successful joint venture with Jardine Fleming (with over $1 billion invested in the Indian stock markets) and acted as sub-advisor to the Walden-Nikko India Ventures Fund (1996-1998), the Prolific India Opportunities Fund (1996-1998), and Hansberger Global Investors Inc (1998-2004). Quantum has since managed Indian equity investments for global institutions, including sovereign wealth funds, pension funds, endowments, and foundations.

What also differentiates Quantum Advisors is that their funds maintain high cash levels.

The conservative management style means QLTEF and the PMS immediately move into cash when the market becomes expensive. For example, in 2015, the PMS was in cash to the extent of 30 percent, although by February 2016 the fund had invested and brought down its cash levels.

Currently, the fund has been maintaining 20 percent in cash even as the Sensex P/E trades at 23 times. Subramaniam says that if the market goes further up, he wouldn’t mind taking the cash position to even 24 percent. “Our cash levels have nothing to do with the macro view of the country. It is a call completely based on valuations,” he says. “Over the last three years the earnings growth has been tepid but there has been a P/E expansion due to domestic as well as international investors buying into the Indian market.”

The concept of getting into cash during fast-growing markets has worked well for the firm. For instance, in late 2007, the fund was 16 percent in cash. It started investing when Lehman Brothers filed for bankruptcy and managed to perform decently. Between January and December 2008, the fund was down by 57 percent when the market was down by 67 percent.

Quantum’s PMS business in November 2008 was around $135 million, when an international pension fund invested $150 million in it. “They sat through our research process and understood us but were not sure if they wanted to invest with us. They said they were good at selecting emerging market managers in developed countries but not in an emerging market,” says Subramaniam.

He has always concentrated on maintaining a high quotient of liquidity in a portfolio, which is why his stock selection slants towards large-caps or a few mid-caps. This philosophy was one of the reasons the PMS outperformed the market in 2008. When the markets crashed, investors in mid-caps and smaller companies suffered more than those in large-caps, since they are more liquid and easy to exit.

By March 2009 the above-mentioned pension fund became more confident in Quantum, and invested another $50 million in the PMS, and the assets under management touched $325 million. Subramaniam then had to look at managing a much larger portfolio.

“Most PMS products are growth products and invest in mid-cap and small-cap companies. We also deal with long-term customers, but we don’t want to miss out on short-term opportunities. It is a huge cost for us. But I appreciate the style of value investing, which requires tremendous patience,” says a senior manager who manages a competing product.

Though the PMS market in India is growing, at around ₹90,000 crore it is still small.